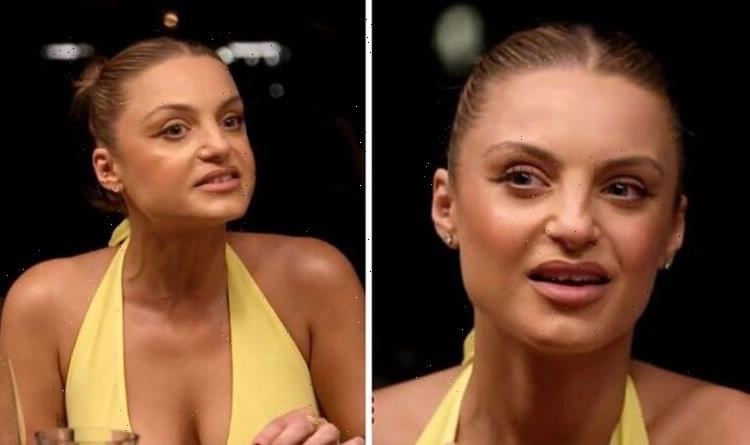 Married At First Sight Australia returned to screens for another instalment of the hit dating experiment and as season nine gets closer to its finale, a major revelation was unveiled. It was revealed bosses of the E4 reality series cut some of Domenica Calarco’s meanest scenes.

Fans were first introduced to Domenica when she walked down the aisle and wedded financial planner Jack Millar.

With a number of things, including food restrictions and animals in common, the two appeared to hit it off right away.

This was something even the presenters picked up on as Mel Schilling labelled them her favourite couple and John Aiken branded them an “Italian power couple”.

However, while her love life was seemingly going smoothly, Domenica clashed with other stars including Olivia Frazer and Carolina Santos.

Last week’s episode delivered a fiery dinner party which descended into chaos after the three ladies got into a shouting match.

In the most explosive dinner party yet, the verbal war erupted after the glassing event was brought up at the dinner table.

The row which took place at the couples retreat saw Domenica smash a glass after fellow bride Olivia Frazer told her she should change her voice.

At the dinner party, things took a turn for the worse when Carolina taunted Domenica and told everyone at the table to “hold their glasses away” from Domenica.

While the dinner party appeared fiery enough on screen, it was revealed some moments from the scene were cut by producers.

A number of sources close to the show claimed producers were working overtime to soften her behaviour “so she didn’t look half as nasty”.

According to the insider: “Minutes of footage of confrontations including countless verbal exchanges were axed.”

The programme has teased a heated and fiery confrontation between the trio of women but it was never shown during the episode.

The source added: “It was all over ads. Dom just screaming that she didn’t like either of them, she got real nasty that night and had a serious agenda.”

Which she stated during the dinner while pointing at both Olivia and Carolina.

The source claimed: “She was a big bully and thrived off belittling her co-stars.

“She regularly taunted Carolina and would joke about her only being on the show because she wanted to join OnlyFans.

“After seeing Domenica was a growing fan-favourite they thought it would work out better if Olivia was the surprise villain.”

Another insider added “it made more sense” as Dom was “the producer’s pet” and “would be the first to report any people playing up”.

Daily Mail Australia did reach out to Channel Nine for comment in relation to the claims.

Married at First Sight Australia is available to watch on Channel Nine in Australia and on E4 in the UK.

13 of the Best Razors For Every Need, Budget, and Skin Type

Horoscope today, Thursday April 14: Daily guide to what your star sign has in store for your zodiac dates
World News