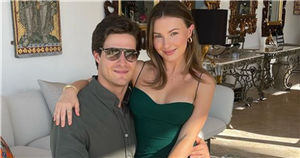 Former Made In Chelsea stars Mimi Bouchard and Ben Darby have announced their engagement with Mimi taking to social media to show off her ring.

The Canadian TV personality moved to London from Toronto in 2017 and soon joined the MIC cast for its 13th season.

A year later, Mimi started dating property developer Ben and introduced her new boyfriend to the MIC viewers as the show returned for its 15th season.

Although there's been no official confirmation of when the two started dating, Ben first surfaced on his lover's Instagram in December 2017.

Last week, Mimi took to Instagram to reveal that she and Ben have taken the next exciting step in their relationship, after a proposal in the Swiss Alps.

Mimi posted a photo of Ben holding her left hand, perfectly showing off the diamond ring to the camera as she captioned the photo: "My forever!!!!" with a ring emoji and a crying emoji.

The comment section was soon filled with messages from fans congratulating the happy couple.

"You two are my favourite people, and you deserve every bit of happiness and love there is in this world."

Beatrice Bouchard added: "WAS WAITING FOR THIS!!! SO HAPPY FOR MY LOVERS!!!!!! We have a wedding to plan soon hehe… love you both so much" with a series of love hearts.

Meanwhile, her Tennis pro cousin Eugenie Bouchard went for a more forward expression of her emotions as she wrote: wrote: "Ahhhh", with a series of love hearts.

Thanking her followers for their well wishes, Mimi posted a selfie of her with the ring as well as a pic of Ben looking down at the ring.

She captioned the post: "Thank you for all of the love on our news!! We are so overjoyed."

Ben also announced the news on his Instagram as he posted two photos of Mimi with the caption: "Fiancé alert."

This was also met with a wave of congratulations and well wishes as Mimi's relative Celeste Bouchard welcomed him to the family.

"Omg wait we are family now," Celeste wrote as Beatrice Bouchard said: "You did good Benny, you did good" with a white love heart.

Mimi later shared a glimpse into their engagement as she posted a video including clips from their trip to the Swiss Alps.

In the beginning of the clip, Ben is spotted down on one knee as he asks Mimi the life-changing question.

Mimi looks shocked as she holds Ben's hand with one of her hands and covers her mouth with the other as she cries of happiness.

In the caption, she teased her followers by saying: "The most special trip of my life.

Ben and Mimi currently live in the Bahamas after they moved there together a few years ago.