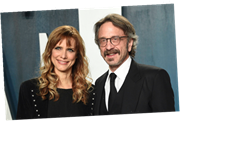 Marc Maron, Emily Blunt, and many more are set to appear during the star-studded streaming telecast of “Her Effortless Brilliance: A Celebration of Lynn Shelton Through Film and Music.” The Lynn Shelton tribute will air live tonight at 9pm ET/6pm PT on YouTube and will continue to be free to stream on the platform afterwards. Viewers can watch the live stream in the embedded video below.

“It has been really meaningful to me to work on this project,” Griffiths said in a statement. “Lynn was one of my dearest friends and losing her has been leveling. It has given me comfort to focus on celebrating her life by bringing together all of these beautiful performances and hearing the heartfelt words of her many friends and collaborators. I hope it brings solace to her family and all those mourning this unfathomable loss.”

Shelton passed away May 16 due to a previously unidentified blood disorder. In addition to the YouTube tribute airing tonight, Shelton’s team is also encouraging fans to donate to the Shelton/Seal Family Fund or Seattle’s Northwest Film Forum.

Many of the participants in tonight’s video tribute have also honored Shelton in conversations with IndieWire in the aftermath of the director’s passing. Blunt told IndieWire about working with Shelton on “Your Sister’s Sister”: “I fell in love first with her utterly infectious laugh and then her deeply empathetic soul that was infused into all of her films. Working with her was like working with family… so, so intimate, at times so exposing as we threw everything against the wall to see what would stick.”

Shelton’s credits include the indie films “Humpday,” “Laggies,” and “Sword of Trust,” plus episodes of television series such as “Mad Men,” “Little Fires Everywhere,” “Glow,” “Fresh of the Boat,” and more.

What happened to the missing Idaho children, JJ Vallow and Tylee Ryan? – The Sun
World News