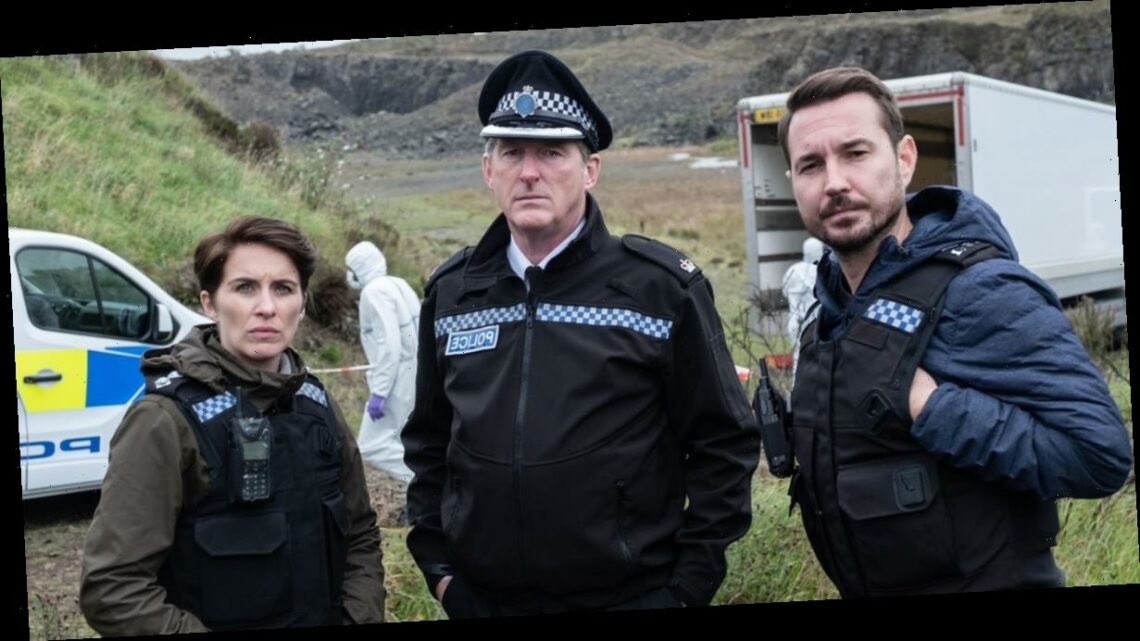 The new Line of Duty series will focus on an unsolved murder case.

AC-12 are brought in to investigate because there is suspicion over how it is being handled.

There are set to be high-octane action sequences as well as the show’s trademark interview scenes.

In fact, there is so much going on the series has been extended to make it the biggest yet with seven episodes.

Martin Compston has teased the scripts are “superb as ever”.

And he has revealed some storylines will reach a thrilling climax.

He said: “One of the things I find exciting is that our favourite series to do was series three, because we were building to this big climax and it feels like we’re back at that point.

“In some way the whole series has been building to this.”

Cop Steve Arnott, played by Martin Compston, made the discovery by watching back old footage.

He realised they had misunderstood a sign from Matthew “Dot” Cottan during his finale breaths.

In a dramatic scene, Steve said: “The letter H in Morse code is four dots. H is not an initial, it’s a clue. Four dots. Four caddies. Four police staff in league with organised crime.

So now we know H is four corrupt officers.

Three have already been unmasked.

Dot was found out shortly before his death in the third series.

Derek Hilton was then found dead in the fourth series after his misdemeanors were uncovered.

And Gill Biggeloe was caught out in the fifth series but after she agreed to tell all about what she knows, she was allowed to walk free and given a new identity.

The cast have teased major questions will be answered in the new series, so it looks like the fourth officer will finally be revealed.

There is speculation it could be Steve or his sidekick Kate Fleming (Vicky McClure).

And during series five many viewers were convinced it could be Ted Hastings (Adrian Dunbar) who is corrupt.

And there are a string of new characters arriving this series who could be dodgy.

Detective Chief Inspector Joanne Davidson will be the cop under suspicion in this series.

After her conduct on a murder enquiry raises alarm bells, AC-12 are tasked with investigating if she’s a corrupt officer.

Insiders say the cop, played by Kelly Macdonald, will “do battle” in tense interview scenes.

Show boss Jed Mercurio said: “AC-12 get involved because there are question marks over her investigation.”

Jed promises she will be TV gold.

In fact, he’s warned: “She is AC-12’s most enigmatic adversary yet.”

Detective Constable Chloe Bishop is joining the team at AC-12.

The cop, played by Shalom Brune-Franklin, will be brought by Ted Hastings in the new episodes.

Producers have revealed DC Bishop is going to be tasked with a key role in the team’s latest investigation.

A spokesman said: “She will be joining AC-12 to assist in their important work on a tricky upcoming case.”

Actress Shalom is thrilled to have joined the show for its sixth series.

And she admits she is such a big fan of it that she was star-struck when she met her co-stars.

She said: “Being on set as such a huge fan of the show is such a trip-out. I was running around being a fangirl and I don’t know if that’s ever going to wear off.”

Shalom has previously starred in hit shows including Our Girl, The State and Cursed.

Show creator Jed Mercurio has promised this won’t be the last series.

The screenwriter wants to keep making it because he has more storylines up his sleeve.

He said: “I really want to carry on with Line of Duty. I think that season six proves that there is much more ground for us still to cover.

“As a writer you dream of getting to the point where people watch your work in such large numbers.”

The cast are all keen to keep making the show too.

Adrian Dunbar said: “I think as long as there’s an appetite from our audience for the show, we’ll keep going.

“Why would we stop? Jed has managed to keep the standard so high for so long and people love the show. I hope it does go on.

“At the moment there is a great appetite among all of us involved in the programme to do more.”

Execs at the BBC are also said to be keen for the show to continue after the new series.

It pulls in bumper ratings of 13million viewers for the corporation — making it TV’s most popular show.

She was 1 of the 1st COVID-19 deaths in the US. A year later her kids are still grappling with the shocking loss.