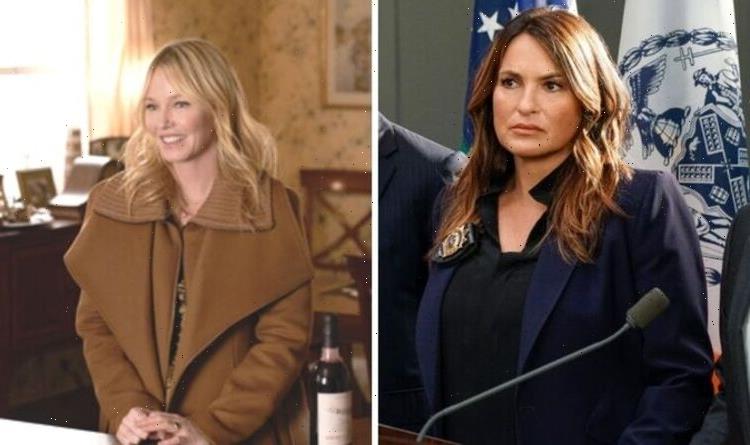 Law and Order: SVU landed on NBC for another instalment of the team led by Captain Olivia Benson (played by Mariska Hargitay) working to bring justice for victims. The latest episode titled ‘Promising Young Gentlemen’ was met with praise from viewers after the series shared an important message about sexual assault.

The detectives of the Law and Order Special Victims Unit primarily investigates and aims to prosecute sexually oriented crimes, including rape, paedophilia, and domestic violence.

As well as crimes which involve abuse against children, the disabled and elderly victims of non-sexual crimes who require specialist handling.

Throughout the series, fans have also gained insight into the personal lives of the detectives who try to ensure the cases don’t affect them personally.

The most recent episode was no different as the team investigated a rape at an affluent secret society held by college students.

ADA Dominick “Sonny” Carisi Jr (played by Peter Scanavino) was informed about the assault by his niece Mia Morino (Ryann Shane), who was a rape victim advocate.

Sonny and Benson interviewed the victim Annabel Nelson who detailed the event as a private dinner where guests would leave their phones and purses, and swear to never speak of the events.

She named her abuser as Austin and remembered he had referred to two other men in the room as Tweedle Dee and Tweedle Dum.

They also interviewed her roommate Sarah Franklin who revealed the men would keep refilling their glasses and wouldn’t allow them to use their phones.

Detective Andy Parlato-Goldstein (Jason Biggs), who had been a member 20 years ago, went undercover in the group discovered had a new chant which was also an admission of rape.

Alongside branded photos of girls, Benson decided to go for a hate crime charge, this action was a hit with fans who agreed rape should indeed be punished as a hate crime.

The fans took to Twitter to express their props to the series with @Furms_who wrote: “A powerful episode tonight, SVU.”

@CBImprintz shared: “I must applaud (Law and Order svu) for making a statement that rape is a hate crime because it has been for decades.”

@theerealbigmee1 commented: “Rape should be considered a hate crime when you really think about it.”

@hempstead_susan added: “Excellent episode with a creepy song that will remain in my head for a while.”

@JustJameis questioned: “Ok (aw and Order) who wrote this song on tonight’s episode of (Law and Order SVU) because I’m honestly too stunned to speak.”

Another young man Jake testified against his frat brothers and told the court they had forced him to write the hate speech and confessed they were forced to watch as Annabelle was assaulted.

This took another turn for the worse when the criminals began spewing hate speech against Jewish people.

Initially, Chief McGrath had grilled Benson about not receiving a heads-up about the mass arrests.

However, the bureaucrat later shifted his opinion to agree with Benson in an appreciated effort to change his ways.

Law and Order: Special Victims Unit season 23 continues Thursdays on NBC in the USA. A UK release date is yet to be announced.

Instantly Enhance Your Glow With This Influencer-Approved Eye Stick

‘How to Survive a Pandemic’ Director David France: ‘I Despaired for America’ When COVID Swept the Country
World News