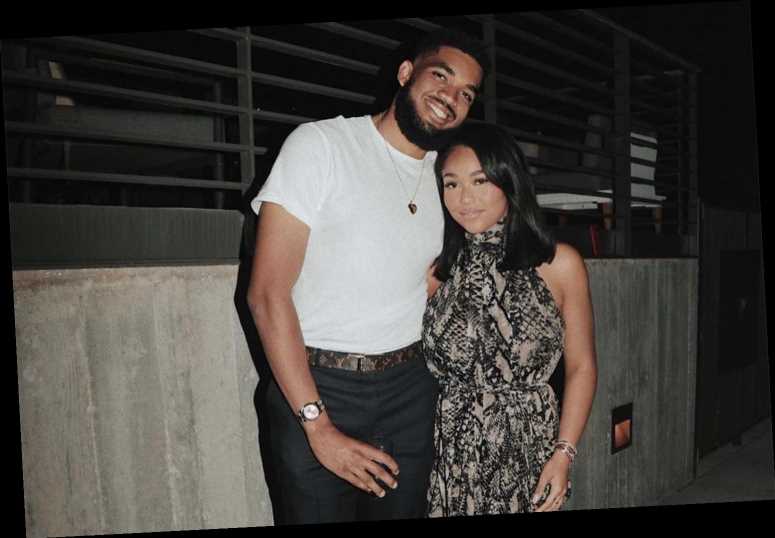 Jordyn Woods Responds to Rumors that Boyfriend Karl-Anthony Towns Cheated on Her: We're 'More Than Solid' Jordyn Woods is shutting down rumors about boyfriend Karl-Anthony Towns' infidelity, confirming that their relationship is "more than solid."

Earlier this week, screenshots of an alleged conversation between the basketball player and another woman began circulating on social media, which both Woods and Towns denied were real.

On Thursday, the model, 23, and the Minnesota Timberwolves player, 25, addressed the rumors on Twitter and set the record straight about their relationship.

"So crazy how someone can make fake screenshots and send it to blogs and y'all believe it😭 my relationship is more than solid and I put that on everything," Woods wrote.

The model also added that she and Towns "already know who is the root of the rumor," and Towns wrote there's "a lot of goofies out here with photoshop skills."

While Woods said she normally doesn't respond to rumors on social media, she said she couldn't let someone "play with my mans character."

"People really be praying on your downfall," Woods tweeted.

Towns also responded to the rumors and denied being unfaithful to Woods.

"So I got the baddest girl in the game and you think I'm gonna waste my energy with anyone else 😂 gtfoh!" the athlete wrote. "Same haters we got now are gonna be the same ones we have when I put that ring on her finger 🤷🏽‍♂️"

Woods also noted that the alleged screenshots don't sound like messages from her boyfriend.

Woods and Towns became Instagram official with their relationship in September.

"I found you, then you found me🤍," the model wrote alongside photos of the couple on the beach together last summer.

In January, the athlete gave his girlfriend tremendous credit for helping him through troublesome times.

Woods has been a support system for Towns amid the death of his mother, Jacqueline Towns, and other family members, who died from COVID-19 last year. The NBA star also tested positive for the novel coronavirus in early January and later revealed that he was hit by a drunk driver in the off-season of the NBA and Woods helped him recover.

"My woman has held me down more than the world knows. From my mother and family members dying (1 on her bday in Cabo), getting hit by a drunk driver (was 2pm in the afternoon FYI) in LA this Off-Season and staying with me in the hospital for the night and helping me in rehab, to this stint with COVID she has been there with me every step of the way and stayed ten toes down," he previously shared.

The NBA player added of Woods, "My love for her knows no bounds and I would be remiss if I don't acknowledge the power a good woman can have in your life. Men, treat your woman like a Queen so she can treat you like a King."