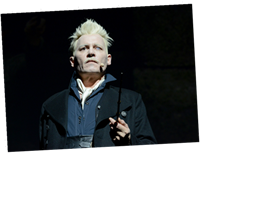 Ramifications from Johnny Depp’s lost libel suit against The Sun continue to affect his Hollywood career.

Fans found themselves divided after a U.K. Judge sided with the publication and deemed Amber Heard’s claims of abuse to be true, thereby enabling them to label him as a “wife beater” in articles. Judge Andrew Nicol announced his verdict on Nov. 2, and Depp’s team plans to appeal.

Stateside, there have been questions about the star’s future with Warner Bros., and the studio made a surprise move with Fantastic Beasts 3 by recasting Depp’s role as Grindelwald. But the actor will still be compensated.

For a star who typically lays low, Depp was knee-deep in the viral pool on social media when news broke about his Fantastic Beasts departure.

To clear up any confusion about who made the decision, Depp posted a note on his Instagram account letting fans know Warner Bros. requested he resign from the franchise as Grindelwald. He complied with their request.

Depp thanked fans and wrote, “The surreal judgement of the court in the U.K. will not change my fight to tell the truth and I confirm I plan to appeal.”

Disappointed Depp fans expressed their support in the comment section, and Twitter lit up about the matter, but many accepted the choice and moved on.

The fandom was already divided about whether Depp should be in the film, and for some, the libel case was a nail in the coffin. There are already questions and suggestions for who should play the character next.

Depp will be paid for his work as Grindelwald

According to The Hollywood Reporter, Warner Bros. must pay Depp’s salary for the third film in the Fantastic Beasts series. Filming began on Sept. 20 and Depp was on deck, shooting only one scene before being asked to bow out.

Per the outlet, he had a clause in his contract that stipulated he receives his salary regardless of whether the film is produced, released, or recast without him. As an actor of his caliber, Depp was set to make eight figures. The contract also lacked any moral provisions, therefore his full compensation won’t be impacted by the U.K. court’s verdict.

Variety reported that Warner Bros. is determined to avoid controversy, and Depp losing his lawsuit was just one attached to the film. Author J.K. Rowling has come under fire for her comments about the transgender community, and actor Ezra Miller was seen on video allegedly choking a fan.

Depp is heading back to court

Depp is due to sit for a deposition between Nov. 10-12 for his defamation case against Amber Heard. He’s suing her for $50 million over a 2018 op-ed published in The Washington Post where she implied that he abused her during their marriage. Per Courthouse News, the trial is supposed to begin in May 2021.

Heard and Depp were married for 15 months before divorcing in 2016 and settled out of court for $7 million.