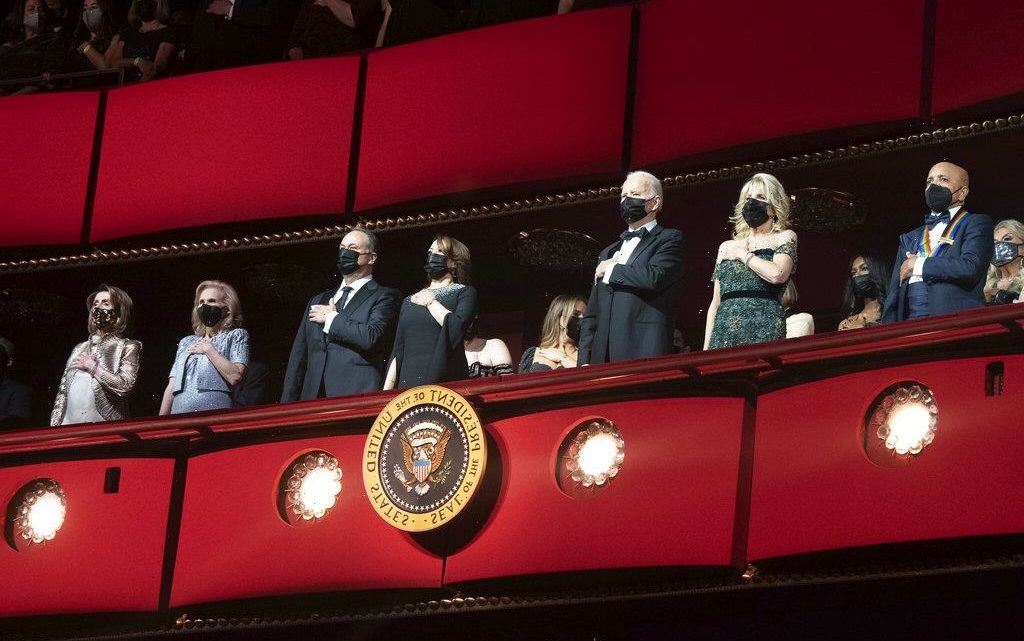 Joe Biden Helps Kennedy Center Honors Return To Tradition During A Weekend Of Politicos, Performers And Proof Of Vaccination

David Letterman opened Sunday night’s Kennedy Center Honors by telling the audience in the Opera House, “Tonight, it is quite nice, very nice, to see the presidential box once again being occupied.”

The crowd cheered and then gave President Joe Biden a standing ovation, after which Letterman quipped, “The same with the Oval Office.” 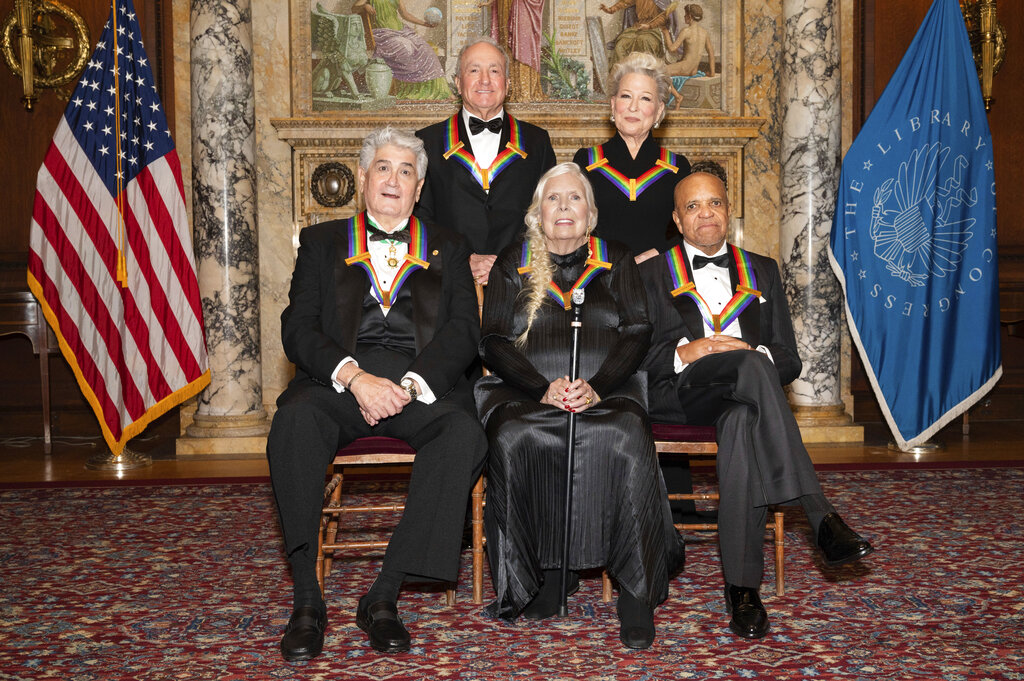 The ceremony marked a return to a large-scale, lavish gala of tradition, as Covid-19 forced last year’s ceremony to be postponed and later scaled back. But it also was the return of the presidential seal of approval, after four years in which President Donald Trump did not attend or host a pre-ceremony reception at the White House.

Instead, Biden and First Lady Jill Biden hosted honorees Justino Diaz, Berry Gordy, Joni Mitchell, Bette Midler and Lorne Michaels for an event in the East Room before the ceremony. The president gave Michaels, the creator of Saturday Night Live, a little ribbing, “He’s trying out seven guys to play me.”

He added, “If you can’t laugh at yourself, we’re in real trouble. And you make me laugh at myself a lot.”

Then Biden introduced Steve Martin, sitting in the crowd, who quipped, “Do you want me to play you?”

“Steve, I’m afraid that you understands me too well,” Biden said.

The ceremony itself, to be broadcast later this month on CBS, again featured moving tributes to the honorees from friends and admirers, but also one of the plum see-and-be-seen A-list social events of the year for D.C. Things weren’t entirely normal, as most attendees were vigilant about wearing a mask and other requirements.

David Rubenstein, the chairman of the Kennedy Center, drew cheers when he said on stage to the audience, “How does it feel to be in a room where everyone is vaccinated and tested?”

Sitting near the Bidens were Vice President Kamala Harris and First Gentleman Doug Emhoff, House Speaker Nancy Pelosi, Chief Justice John Roberts and Secretary of State Tony Blinken, along with other figures like Shari Redstone, Bob Bakish and Steve Schwartzman. Joe Manchin, who was a visible presence in the scaled back Kennedy Center Honors last spring, made a return visit, along with a slew of other Democrats. There was a sprinkling of Republicans — including Newt and Callista Gingrich, former Secretary of Transportation Elaine Chao, Sen. Shelley Moore Capito (R-WV) — but Letterman perhaps said it best when he told the crowd, “This night is about the honorees whose unique gifts cross all boundaries and represent all parties from the left to the far left.” 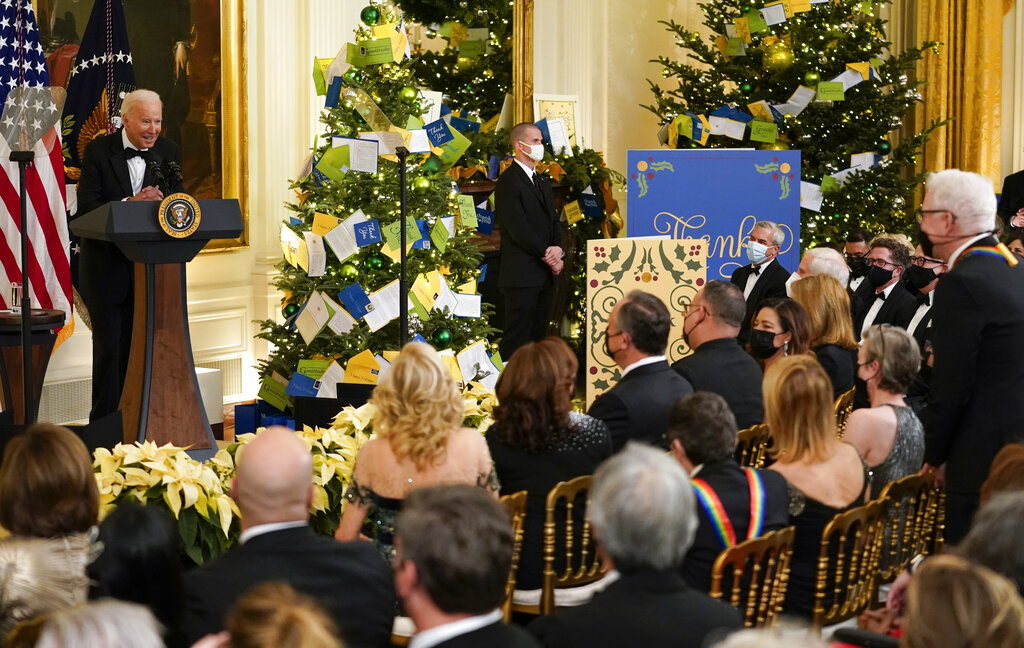 The ceremony has shades of the Grammys, the Tonys, the Oscars, The Emmys and This Is Your Life.

Chita Rivera honored Diaz and noted that the opera legend has “a secret fondness for singing disco.” Grace Brumbry said that Diaz “was that rare combination of an opera singer who is also an extraordinary actor.”

For the tribute to Mitchell, Norah Jones performed Case of You, Ellie Golding sang Big Yellow Taxi and Brandi Carlile performed River, and Brittany Howard finished up the set with Both Sides Now accompanied by Herbie Hancock.

Goldie Hawn, Scarlett Johansson, Melissa Manchester and the cast of Hello Dolly paid tribute to Midler, with Kelli O’Hara singing Wind Beneath My Wings. Billy Porter got an ovation for a medley of Midler’s hits, finishing with From a Distance. Barbara Hershey said that she became lifelong friends with Midler when they made Beaches. She said that when they get together they are recognized and she has to tell people, “Yes, it’s us. Yes, we are actually friends. Yes, I’m still alive.”

Michaels’s tribute was highlighted by Paul Simon singing America, and by three different on-stage versions of Weekend Update: one anchored by Kevin Nealon, followed by Amy Poehler and Seth Meyers, and then Colin Jost and Michael Che.

The tributes turned into a roast at points, from cast members past and present, along with multiple host Martin, who said, “Even after 45 years of producing the show, Lorne still has a dream about Saturday Night Live. That is to get two laughs in a row.”

The tribute to Motown founder Gordy featured Smokey Robinson, Andra Day and the cast of Ain’t Too Proud: The Life And Times of the Temptations. Although Stevie Wonder, with the finale, called a brief halt to reset the production (he even sang, “We’re getting this right,” as the audience waited), the wait was worth it: Superstition, followed by the capper, Higher Ground.

‘No Time To Die’ Producer Barbara Broccoli: “Rest Assured, James Bond Will Be Back”

SEAL Team season 5: Clay to quit team as star hints at family struggles? ‘Can’t do it all’