Home » TV & Movies » Joanna Lumley defends the Queen as she pulls out of COP26 ‘Rest is more important!’ 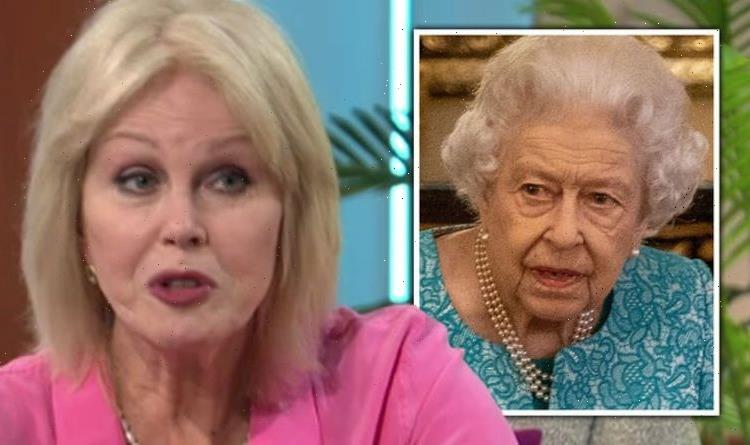 Joanna Lumley defends the Queen as she pulls out of COP26 ‘Rest is more important!’

Joanna Lumley joined Christine Lampard on Lorraine on Thursday to discuss her new book A Queen for All Season which celebrates the monarch ahead of The Queen’s Platinum Jubilee Celebrations that will take place next year. However, after it was confirmed the Queen would miss the COP26 climate change summit, the actresss urged the monarch to “rest”.

Joanna remarked: “What really struck me is when she was 21-years-old she was in South Africa and she made a vow.

“She said, ‘I promise no matter how long or short my life is I’ll be dedicated to the service of my people and the commonwealth.’

“That’s quite a promise to make when you’re 21 and something to keep to up to 95 and will take onto the future.

“Never putting a foot wrong, never doing a bad or wicked or lazy or sullen thing – just being the Queen.

Christine commented: “I think that’s why in light of the news from the past few days of her not going up to Glasgow for the Cop 26.

“A lot of us sit back and think we want you to rest, take this time, get your energy back and we will see you soon.”

“I couldn’t agree more,” Joanna replied. “For all of us, bereavement is an immense physical blow as well as a mental blow and the Queen has been dedicated, doing her duty, turning up, looking as beautiful as ever.

“But we’re all going, ‘Don’t!’ Cop 26 will be what it is, we’ve got our Prime Minister there it’s held within the British Isles so that shows we’re committed to it.

“It would have been wonderful if [she] was there but rest, rest, rest that’s far more important.”

Joanna opened up on the moment she met the Queen when she received her OBE.

She said: “I was completely starstruck [when I met her] and I think that’s quite the effect she has on everyone.

“For a start, her face is so well known, you’ve known her face all your life.

“She’s been on stamps, on banknotes, she’s obviously been in the paper the most photographed woman in the world, in all time probably.

“Suddenly when the Queen is in front of you your heart beats faster and people say her eyes are so blue, she looks so beautiful.

“People are blown sideways it’s literally like seeing something from another planet meeting the Queen for the first time.

“We all get tongue-tied it’s adorable,” the actress continued.

“She must be so used to it seeing masses of people quietly muttering to themselves not knowing quite what to say.”

“Did you feel like this?” Christine asked. “When you were awarded your OBE did you have that sense of never?”

“My heart was absolutely beating so fast,” she replied. “I know she said something to me but I can’t remember what it was.”

Lorraine airs on ITV on weekdays at 9am.