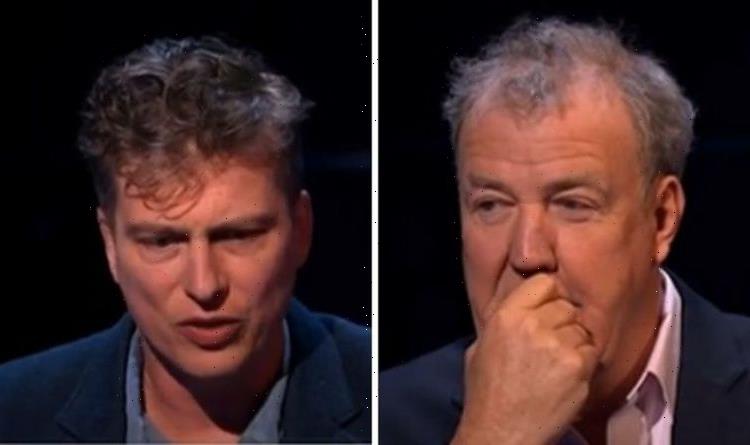 Who Wants to Be a Millionaire: Contestant uses all life lines

Mark Blacklock, a fiction author from York, tried his luck at wining big on ITV’s Who Wants To Be A Millionaire? presented by The Grand Tour star Jeremy Clarkson. But the contestant was left stumped by a question on fantasy novels and ended up using all four lifelines to get some assistance over the answer, while Jeremy, 61, quipped that writers would “laugh” at him.

The question was: “Which of these famous fictional locations from fantasy novels was created first?”

Options for the answer were Hogwarts, Discworld, Hobbiton and Narnia.

Jeremy replied: “So, just remind me, the two that you think are in with a shout are Narnia and?”

“So you’re hoping one of those goes away?” the former Top Gear star clarified.

“Let’s find out shall we,” he added. “Computer, could you take away two randomly selected wrong answers please?”

The computer left both Narnia and Hobbiton on the screen.

Mark phoned Simon, who wasn’t sure of the answer. This led to Mark phoning another friend – using his third lifeline.

With no luck a second time around, the author decided to try his last option.

“I mean, I can’t leave with lifelines on the table,” he joked.

“You can’t leave with lifelines, you can’t” the host agreed. Jeremy was forced to admit that he too wasn’t certain on the answer.

Eventually, Mark decided to take a guess and went with Hobbiton.

Fortunately for him, the answer was correct and he secured £8,000.

Viewers were stunned by Mark’s decision to use all four lifelines on a single question, only for none of them to help.

Taking to Twitter, one wrote: “Oh dear……none of the lifelines have helped. Poor Mark. #WhoWantsToBeAMillionaire.”

Another penned: “Using all your lifelines on one question #whowantstobeamillionaire.”

“This fella writes fiction for a living and has wasted 4 lifelines on this,” another mocked.

But incredibly, Mark went on to win £64,000 with no lifelines after a successful few rounds.

Who Wants To Be A Millionaire airs on Fridays at 9pm on ITV.