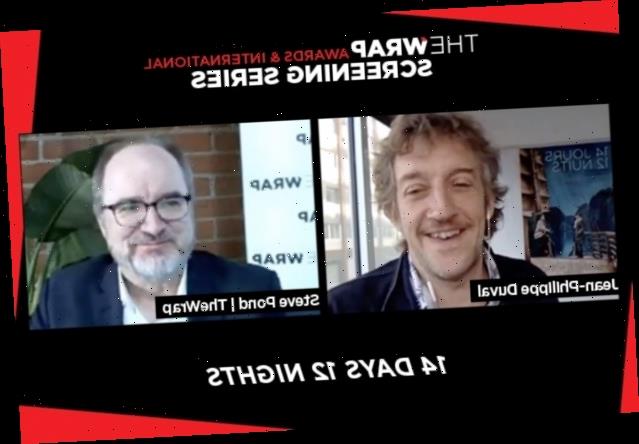 The French-Canadian director looked to Bergman’s 1966 film “Persona,” about an actress who becomes mute, to harness the power of silence

“I will tell you a little secret that I have,” Jean-Philippe Duval began his confession to TheWrap’s Steve Pond in discussing the making of Duval’s film “14 Days 12 Nights,”  the emotional tale of two women from different cultures who find their lives irrevocably entwined.

In the movie, French Canadian Isabelle Brodeur (Anne Dorval)  takes a solo journey to Vietnam, her adopted daughter’s birthplace.  Through an unexpected connection, Isabelle learns the  existence and whereabouts of her daughter’s biological mother (Leanna Chea) and struggles to find a way to tell the biological mother that the daughter was killed in an accident at age 17. This by the way is not a spoiler, Isabelle’s loss is front and center from the beginning of the story.

Pond had asked Duval how he managed to communicate such a wealth of emotion with very little dialogue, so Duval revealed his “little secret.” While alone in his room in Vietnam preparing to shoot on location, he rewatched Swedish director Ingmar Bergman’s 1966 film “Persona.” The psychological drama revolves around a young nurse named Alma (Bibi Andersson) and her patient, well-known stage actress Elisabet Vogler (Ullmann), who has suddenly stopped speaking.

“The movie has no dialogue, it was very inspirational for me,” Duval said. “(Someone) says about the character Liv Ullman plays that she refuses to speak because in fact she doesn’t want to lie. So I took this from Bergman and his character. For me, in a way, it helped me to be more confident.”

Duval, who is also a television director, said in his television work characters talk virtually nonstop. He relished taking a break from that in “14 Days 12 Nights.”

As a veteran documentary filmmaker, Duval also said he brought a lot of documentary techniques to shooting a fictional story.

Duval said he felt a deep personal connection to the film’s script, written by Marie Vien, the adoptive mother of two girls, one from China and one from Vietnam. In fact, he was hooked after reading a one-page description of the story.

“I would say I am first a father, of two young boys, and also my sister adopted a little boy from China 15 years ago,” Duval said.  “I was very engaged in that story, and I was very touched by this quest of Isabelle. There were a lot of levels and layers in that story.”

“It was also about healing, abut redemption, all of these themes…I think it was a way to connect to my very first (work) as a young cinema student, a way of telling stories,” he said.

Duval also spent eight months in Vietnam prior to shooting the film in order to make sure he did not misrepresent the culture.  His time there changed him, he said.

“I would say I have changed in something very intimate,” the director said thoughtfully.  “I think my first conception, my vision of that culture, was the guilt of the West — we made so much damage in Vietnam, I was afraid, I guess…I was from the West, from Canada, and I wasn’t sure how they would accept us.”

He said the people of Vietnam made it easy to bridge the divide.

“They (taught) me to be more open, more peaceful,” he said. “I was in a way surprised, maybe.”