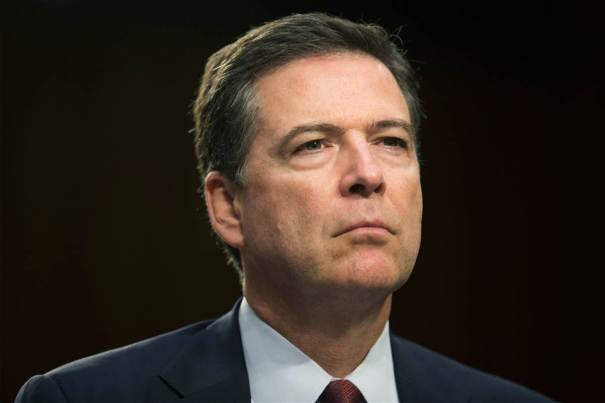 Former FBI director James Comey is not any less irked after spending a second full day being grilled behind closed doors by Republicans in the House Judiciary Committee about Hillary Clinton and the Steele Dossier.

As he had done two weeks ago, when GOP members of the committee demanded his presence for a last gasp paddling as they prepare to lose the gavel to Dems, Comey again staged a lively pop-up presser in the hallway at conclusion of the grilling to explain how he felt about the hours he will never get back, spent in their company.

“Another day of HIllary Clinton and Steele Dossier,” Clapper snickered.  “This while the President of the United States is lying about the FBI, attacking the FBI, and attacking the rule of law in this country.”

“At some point, someone has to stand up and, in the face of fear of Fox News, fear of [Trump] base, fear of mean tweets, stand up for the values of this country. And not slink away into retirement, but stand up and speak the truth,” he added.

During the Q&A portion of Comey pop-up presser, one reporter asked what he thinks is the effect of President Donald Trump calling his former fixer Michael Cohen a “rat” whose office the FBI “broke into.”

“It undermines the rule of law,” Comey explained. “This is the President of the United States calling a witness who has cooperated with his own Justice Department a ‘rat’.”

“Say that again to yourself at home, and remind yourself of where we have ended up,” Comey marveled.

“We have to stop being numb to it, whether Republican or Democrat; stand on your feet, overcome your shame and say something!” he advised politicians on the Hill.

A Fox News reporter, noting the “hit” the FBI has taken in the last year, asked Comey what responsibility he bears.

Comey was having none of it:

“The FBI’s reputation has taken a bit hit because the President, and his acolytes, have lied about it constantly. And, in the face of those lies, a lot of good people who watch your network believe that nonsense. That is a tragedy…That damage has nothing to do with me.”

Another reporter asked if he has confidence in Acting Attorney General Matt Whitaker, who Trump named to reign in Special Counsel’s probe of Russian interference in the 2016 election, after sacking AG Jeff Sessions.

When is Ariana Grande's Sweetener World Tour happening at the O2 and how can you get tickets?
World News