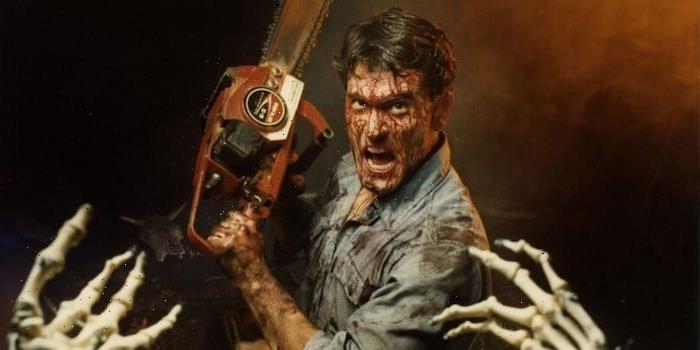 Those sneaky so-and-so’s over at Sam Raimi‘s Ghost House production company have been quietly working on a new Evil Dead film and we’re only now getting some intel on what the project is about.

Right up front, Bruce Campbell is not appearing in this film and Sam Raimi isn’t directing, but both are producing alongside their longtime collaborator Rob Tapert.

Evil Dead Rises serves as a sequel to the 2013 remake, helmed by Fede Alvarez. This time around Irish director Lee Cronin (The Whole In The Ground) will direct with current plans for the film to skip theaters and debut on HBO Max.

Deadline has a scoop about a new member joining the cast. Clickbait‘s Mia Challis will join up with the previously announced Lily Sullivan and Alyssa Sutherland.

That’s All Well And Good, But What About the New Plot Details?!?

Alright, alright. I was getting to that! Campbell initially shared some vague details about the movie, so the big news from the Deadline scoop is that Evil Dead Rise will eschew the traditional cabin in the woods locale for the big city. Los Angeles to be specific.

“In the fifth Evil Dead film, a road-weary Beth pays an overdue visit to her older sister Ellie, who is raising three kids on her own in a cramped L.A apartment. The sisters’ reunion is cut short by the discovery of a mysterious book deep in the bowels of Ellie’s building, giving rise to flesh-possessing demons, and thrusting Beth into a primal battle for survival as she is faced with the most nightmarish version of motherhood imaginable.”

I see what you’re layin’ down there, Evil Dead, and I like it. Deadites in a seedy LA apartment complex sounds rad as hell to me. You got the single mom familial drama and demons thirsting for human souls in the big city. Count me in!

Evil Dead Rise is currently filming in New Zealand, which is where Tapert has been set up since the Xena days. Alvarez’s reboot was also filmed in New Zealand so I think his plan to unseat the Tolkien films as the country’s primary film export is only a few movies away from success.

The thing I’m most curious about is tone. Evil Dead can be anything from deadly serious (the original film and remake) to slapstick comedy (Army of Darkness and Ash Vs The Evil Dead) or a combination of the two (Evil Dead 2).

Cronin’s The Hole in the Ground doesn’t have the chaotic energy of a Raimi film, but it builds tension quite well, so it really could go either way. But if they’re saying this is a direct sequel to the 2013 remake, then I’m going to place my bet on this being more horror-forward than goofy comedy.

The brilliant thing about the Evil Dead series, though, is whatever flavor we get it stands a good chance of ruling.

Boy, 7, is trapped between doors and crushed in home elevator accident
World News