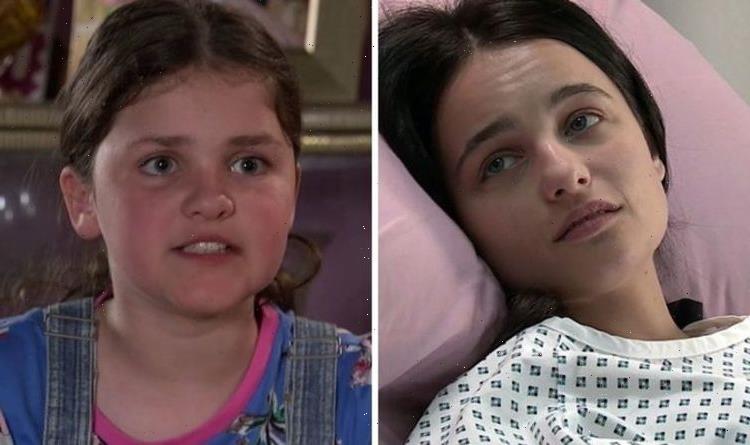 Coronation Street has given viewers a shocking couple of weeks that started with Alina (played by Ruxandra Porojnicu) being sent to hospital after she was caught in a fire. This was just the beginning for Tyrone Dobbs (Alan Halsall) as it has been one problem after another. It all looks to be coming to a head though, as fire starter Hope Stape (Amelia Flanagan) now faces the prospect of leaving the ITV soap for good.

Hope is in serious trouble, not just with Tyrone and Fiz Stape (Jennie McAlpine) but also the police following her confession over the fire.

Both Tyrone and Fiz are distraught at the prospect of Hope being taken away from them, but it is a likely scenario following her actions.

During an interrogation by the police, the topic of Alina’s house fire quickly came up.

Hope seemed unable to determine if her actions were right or wrong, worrying the officer.

Following the questioning, Tyrone and Fiz hold hope that she would be sent to youth court to determine her punishment.

Later, Fiz confessed to Hope that there was a strong chance that she may have to spend some time in a special home after the court hearing.

Fiz, Tyrone, and Alina all looked worried, with no one sure about the upcoming verdict.

Evelyn (Maureen Lipman) assured Hope that if the worst were to happen, they would do everything they could to bring her home.

What has Hope done?

Last week, viewers received the devastating news that Alina had a miscarriage after being sent to hospital.

The tragic news came after she was caught in a house fire, having to be pulled out of her home and put in an ambulance with Tyrone watching on in horror.

At first, it wasn’t clear how the fire started, but all signs pointed to Hope being to blame.

The fire started in the cot of Alina and Tyrone’s unborn child, with a scented candle being determined as the cause.

It wasn’t long until Alina and Tyrone questioned the fact the candle was on the other side of the room away from the cot, making it impossible for it to have fallen into it on its own.

Someone had to have moved the candle, a disturbing revelation for everyone involved.

Earlier in the episode, Hope was last seen walking into the room and looking at both the cot and candle.

Eventually, Hope confessed to starting the fire, forcing Tyrone and Fiz to inform the police.

The ordeal has kept fans gripped as Hope’s future hangs in the balance, and many have taken to Twitter to share their thoughts on the troubling situation.

One fan shared: “In Coronation Street Fiz should not blame Tyrone as it’s not the first time Hope has started a fire.”

“I don’t think Alina and Tyrone will last after all this! Can’t believe he defending Hope,” another added.

A third commented: “The Stapes were well wide of the mark when they named their daughter Hope!  Despair would be closer, but not nearly as easy for Tyrone to spell.”