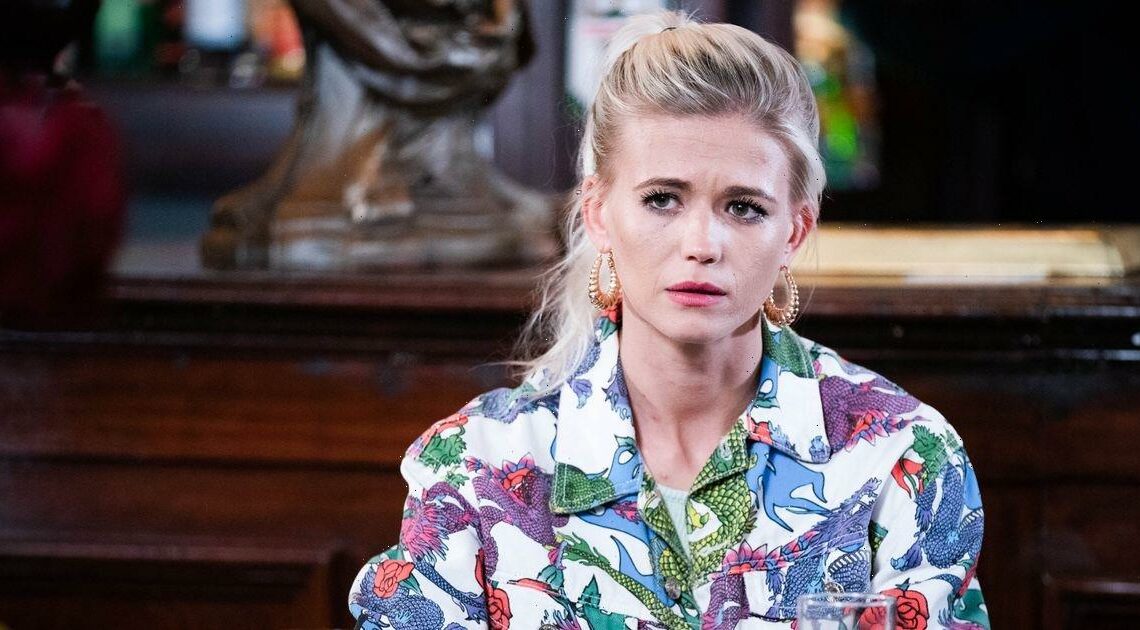 Kim is worried she has lost her mojo, but Lola tries to encourage her fellow Albert Square resident – however, will Kim listen?

Since joining EastEnders in 2011, Lola has been involved in dramatic storylines of her own – from relationship troubles, to giving birth to daughter Lexi during a huge event.

Lola actress Danielle Harold has also led an interesting life including a life changing appearance alongside TV chef Jamie Oliver and speaking openly about her health battle when she was a teenager.

Danielle joined EastEnders in 2011 as Lola, before leaving the soap to pursue other projects four years later.

Talking about her exit in 2015, the actress said in a statement: "I've had the most amazing time at EastEnders having been involved in some exciting story lines, including giving birth in a live scene.

"I'll miss everyone here and am looking forward to the future."

Her announcement left both fans and members of the EastEnders team devastated, with Executive producer Dominic Treadwell-Collins praising Danielle for her performance in the soap, saying: "[She] is a fantastic actress and I genuinely look forward to seeing her since in future roles away from the Square." From there, Danielle had further success with roles in TV series including Casualty, but also forged a career in horror films too.

Between 2017-2019, Danielle appeared in a number of horror films including Fanged Up, Two Graves, Monster, Dead Ringer and The Tombs.

However, she revealed that she could not wait to return to the role of Lola Pierce, telling Mirror Online: "I was stereotyped – it was the classic prostitute or pole dancing role. I couldn’t wait to get back to EastEnders!"

The star later made a welcome return back to the popular BBC soap, where she has continued to delight fans ever since. Not only is Danielle a fan favourite as Lola, but off-screen, she is equally popular with her fellow cast members too.

She has since revealed that she is close friends with co-stars including Mick Carter actor Danny Dyer, and during the lockdown in 2020, the cast would chat regularly via video call.

In May 2020, Danielle shared a screenshot of her fellow cast members with the caption: "Missing my EastEnders family #eastenders #stayathome".

The sweet snap, which featured cast members including Emma Barton, Adam Woodyatt, Rudolph Walker and Maisie Smith sent fans wild, with one commenting: "That's one zoom chat I'd love to be part of!"

When Danielle was a teenager, the actress contracted a serious illness that affected her school life.

Danielle has spoken openly about her health battle, revealing that following stays in hospital, she left school with only one GCSE.

She told The Mirror: "I was in year 10 when I fell ill and was in and out of hospital. At that point I just gave up and didn’t try with GCSEs.

"I didn’t do well at school, I used to bunk off lessons a lot. I always felt frustrated because I couldn’t understand maths and English. I knew I’d never get good grades, I was more into drama and sports."

Long before Danielle appeared on our TV screens as Lola, she starred in the reality TV programme Jamie's Dream School.

The documentary series aired on Channel 4 in 2011, and featured celebrities helping young people who had left school with less than five GCSEs.

The series was led by Jamie Oliver, with lessons taught by celebrities including Dr David Starkey (History) and Simon Callow (English). Working as a waitress at the time, Danielle decided to apply to the programme and was offered a place – saying that the experience completely changed her life.

She told Daily Mail: "It was either continue waitressing or do Jamie’s Dream School.

"I worried quitting my job would be a mistake but it turned out to be the best decision I’ve ever made," adding: "Jamie was lovely." Recognising her potential, the actress was encouraged to apply to study at Cambridge University.

However after winning a scholarship following her appearance on the programme, she used the money to pay for acting lessons and eventually won the role of Lola Pearce in EastEnders.

Talking about the audition, she said: "I was terrified," adding: "Afterwards I cried because it was such a relief to get it over with. And when I heard I’d got the job I couldn’t believe it."

EastEnders airs Monday, Tuesday, Thursday and Friday on BBC One

Kourtney Kardashian & Travis Barker's Families Give Them The Green Light To Have Kids Together!