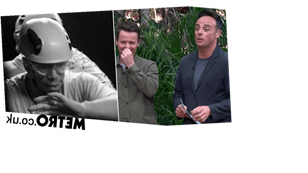 Ian Wright is not winning himself any fans on I’m A Celebrity… Get Me Out Of Here after snapping angrily at Ant McPartlin in the middle of a trial.

The footie ace joined James Haskell for tonight’s Bushtucker trial, which saw them attached together as they navigated their way through a pitch black maze full of critters.

In extremely awkward viewing, Ant and Dec were outside desperate to give them a hang as James and Ian repeatedly missed numerous stars by inches after not being thorough enough.

Eventually Ant tried to give Ian a heads up that he was close by another one of the coveted star.

He was rewarded by having Ian snap at him, aggressively yelling: ‘Yeah, thanks Ant!’

Ant shockingly cringed, and then went quiet, instead suffering in silence as he stopped helping them any further.

Apparently, screaming out for help from people including Tom Cruise, Jesus and Oprah was more effective for him somehow than someone who was there to tell him what to do.

When the clock was over, the pair only found six of the 12 stars available, and Ian stormed out of the room and threw his helmet and goggles across the floor in a strop.

Viewers were livid at Ian, telling the 56-year-old to ‘grow up’ as he lashed out in frustration.

Ant wasn’t the only person that felt the wrath of an angry Ian on Wednesday night episode, with Andrew Maxwell also clashing with the footballer.

The pair have clashed more than once on their time in the camp together, but it seems that they might have hit breaking point in an argument over who gets to cook and taste food.,

It ended in Andrew storming off, and being calmed down by James as his patience reached the end of its tether.

Could there be an explosion in camp before the day’s end? With the first elimination looming, Ian is definitely not winning himself fans.

I’m A Celebrity… Get Me Out Of Here continues nightly 9pm on ITV.