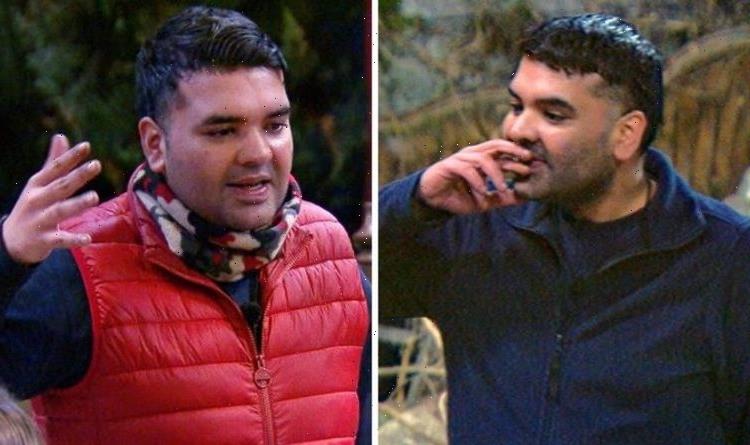 DJ and record producer Naughty Boy has been ruffling feathers throughout his stint on the 21st series of I’m A Celebrity… Get Me Out Of Here! He has now become the fifth celeb to exit the show after ITV viewers voted him off, but not before attracting even more complaints right at the start of Wednesday night’s new episode.

The final week of I’m A Celeb series 21 is underway, and viewers are still unhappy with the celebrities’ poor behaviour.

Within the first few minutes of last night’s show, Naughty Boy was complaining his bed had been positioned too close to the door.

The controversial campmate aired his grievances to David Ginola, claiming the position of his bed left him unable to get a decent night’s sleep.

He defended himself, saying: “The door to go to the toilet is right in front of my bed, it doesn’t close properly and it was freezing last night.”

However, he further aggravated EastEnders star Adam Woodyatt by sleeping in when he was meant to join him on cleaning duty.

“It’s not fair. You need to be more mindful of that,” Naughty added to David.

“I’m not going to get up straight away because I need to get some rest.”

For many viewers, though, his defence wasn’t good enough and several critical comments started popping up on social media.

Twitter user CH said: “Why doesn’t Naughty Boy move into a different bed from one of the campmates that has left instead of b******g?”

TheRealDeclanKincaid wrote: “It’s only been on 5 minutes & Naughty Boy is getting on my nerves.”

And Tommo added: “Not even 5 mins in and really wish Naughty Boy could just walk out.”

Many viewers also expressed joy when he was voted out, coming eighth in the overall competition.

Slushie tweeted: “Finally!! Finally Naughty Boy’s gone! I can finally not get annoyed during each episode!!”

On the other hand, some viewers weren’t pleased to see the disruptive campmate leave the show.

Despite causing drama throughout the series, Naughty Boy has still performed well in the trials and expressed surprise to be kicked off after being voted to take part in several challenges.

Asked about the rows in the camp by Ant McPartlin and Declan Donnelly, Naughty Boy questioned: “Was I the instigator?”

He told Ant and Dec: “I’ve learnt that when you’re in a situation like in the Castle you can’t take anything personally.

“When someone’s frustrated they’re frustrated because of the situation they’re in and just how to get on with people and support each other and not really take anything for granted.”

Still, many fans will be pleased to get a break from Naughty Boy’s complaints during the remaining few days in the camp.

I’m A Celebrity… Get Me Out Of Here! continues tonight at 9pm on ITV.