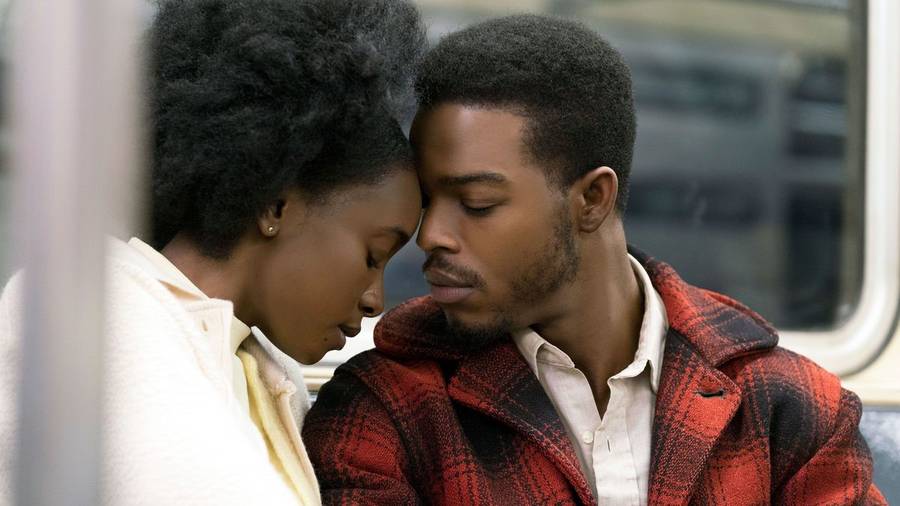 The story of a black man arrested for a crime he did not commit and the woman seeking to free him before the birth of their child, “If Beale Street Could Talk” offers a powerful portrait of hope under the bitterest of circumstances.Barry Jenkins’ follow-up to “Moonlight” adapts a 1974 novel by James Baldwin, whose fearless, poetic honesty has for decades given a deeply-needed voice to the black community and to the forgotten, mistreated and disenfranchised everywhere. Anchored by breakthrough performances from newcomers KiKi Layne and Stephan James, this creative collaboration brings together multiple generations of storytellers for a powerful experience that often feels unlike any other brought to the screen.
Moviefone recently spoke with James and Layne about their work in the film, both under the watchful direction of Jenkins, as well as with each other. In addition to talking about the inspiration and clarity they drew from Baldwin’s source material, they discussed the challenges of charting the evolution of these two complex, intertwined characters, and finally, reflected on the ways that their solidarity through the adversity of the story — even arriving at something much less than a fairy tale ending – should be viewed as optimistic and hopeful.Moviefone: This is a story about people of color created from the ground up by people of color. How did this maybe feel unique among the acting challenges you’ve tackled before?KiKi Layne: What was unique was seeing these two young black people who are essentially soul mates. We don’t see too many stories like that where it’s something so much deeper — and that can’t really be explained between Tish and Fonny. I thought that was so beautiful. But because it’s written by James Baldwin, who had an ability to speak about social issues and injustices and such a special way, to see this beautiful love story but also this commentary on social issues interwoven so beautifully, that’s what makes this story so special and unique.Stephan James: It was different because it was Baldwin. It was the first time that anyone had adapted Baldwin for the English language, so I think that the cast and the crew, starting with Barry, really accepted the weight of that sort of responsibility and understood how important it was to accept his language and to live through his words, and if anything it felt different because of that.How did you map out that evolution of their maturity – the parallel lines of their happy times, and then the events that force them to grow up a little faster than they’re ready?
Layne: A big part of navigating all of that was communicating with Barry. He helped me to better understand where is Tish at, and to navigate where Tish was at in what moments — what has she experienced up to that point? Am I speaking as the 19-year-old that’s currently going through all of these things, or am I speaking as the woman we see at the end of the movie who’s already been through it and has grown so much because of it? Barry was a big part of me navigating that.
James: I was excited about the arc that Fonny was going to take in the film; you see him at his most joyous moments and at his darkest times. And it’s sort of a balancing act, that vulnerability with strength, and wanting to be strong in the face of my fiancée and trying to uplift her and support her, knowing that she’s carrying my unborn child. So, I think there’s that and not letting the situation that he’s found himself in tear him down too much. So for me it was a big balancing act trying to find strength when you know everything has sort of been taken away from you.How did you and Kiki find a way to maintain that connection between Fonny and Tish, even though you were separated for so much of the story?
James: KiKi and I just sort of accepted the responsibility that — if anyone was going to believe this story — it would have to start with Tish and Fonny. So we decided together to let our guards down and be vulnerable and to try things with each other. I think that’s a big credit to Barry in terms of the environment that he helped to create in making us comfortable to explore each other. And KiKi is such a giving actress that it was easy for me to play off of her. We only really got time to hang out during the chemistry read that we had in New York before she had been cast, so we really had no time to develop the material and to dive in with each other.
Layne: The way they set up the shooting schedule gave Stephan and I time to do lighter scenes towards the beginning of the shoot, and then those more difficult scenes in the prison and everything else after we had had more time to get to know each other. Steph and I really had an understanding coming into the project that the love between Tish and Fonny is the film, and to best serve that we understood that we would have to let some walls down a lot faster than a whole lot of people would be comfortable with. But Baldwin created such a beautiful and rich love story, and then Barry had such a beautiful vision for it that even in those really tough prison scenes and everything, it seemed to come more naturally by the time we got through them.

Was there something from either the script, or maybe even Baldwin’s writing, that you drew upon that informed you as you were sort of figuring out how this character would be portrayed on screen?
James: I think it was everything. A scene that was cut out of the film was the scene where Fonny asks Tish to marry him in his apartment, and to me that scene sort of embodied everything that Fonny is — this emotional artist, at the end of the day. He feels and he describes things in a different sort of way. It’s not in the film, but it’s in the performance. And that’s the beauty of Baldwin, that he was able to give us so much sub-context in the novel for us to refer to. And I must have read [the novel] two or three times while making this film. So it’s an incredible piece of source material when you have someone who’s so transparent, brutally honest in the language. So to me it was an incredible thing to be able to adapt Baldwin.
Layne: There’s one line in the book where Tish is kind of describing herself and she says people [think] she looks like she needs help – like she just had such a softness to her. I was like, what does that look like and feel like and sound like? Because that’s not how I come off at all. So I latched on to that aspect of Tish, and then started playing around with it — because she’s not weak. As I dove deeper into the character and the story, Tish is a very strong woman. So I had to figure out how do I communicate all of the strength that actually lies in her?Is there anything that you think Beale Street is exploring that other movies haven’t before, or maybe is especially in need of being given attention right now?
Layne: Even though this film is based in the early seventies, we are still very much having so many of those same conversations and dealing with those same issues. I think what’s special about “Beale Street” is that it forces you to have conversations about these issues, not just from a place of facts and statistics but really talking about the humanity of these people who are experiencing this really unfair, painful situation. You are forced to really see them and everything that they are fighting for, which I think is often missed in how these stories are portrayed.

‘Once In A Lifetime Sessions’: Ryan Tedder Reveals How He Came Up With Hit Song ‘Apologize’
World News