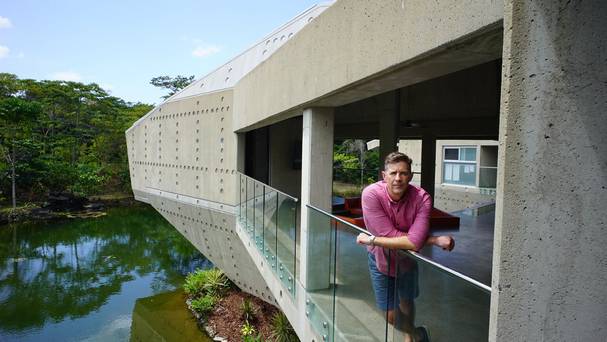 In an interview, there are certain things you rely on. Chief amongst them is your recording device. And so, when I played back the file there was nothing, not muffles, not barely audible squeaks. Nada. Thankfully, there were notes, but there are still a couple of facts to be checked. And one is about underpants.

Specifically their location and from where my interviewee took them before going to his aunt’s funeral. Even though he is back-to-back with meetings and press obligations, Dermot Bannon is very gracious. “Sure, it happens to us all,” he says, before clarifying: “I put the underpants in a box and put the box on the back seat of the car. And then I had to bring my box with my underpants to the funeral. Then, my other aunts got into the car and there was the box of underpants.” Of course they did. That makes much more sense. More on underpants later.

Bannon had been chatting in advance of Incredible Homes, his new series which, like 2017’s New York Homes, lets him stretch his legs outside of Ireland. This series takes him to Australia, Sweden and somewhat less exotically, London. He’s now served 12 tours of duty on Room To Improve, in the trenches with Ireland’s most… enthusiastic homeowners. You have to wonder whether he gets to leave the country as some kind of R&R.

Incredible Homes mixes high, and eye-wateringly expensive, architecture, with subtle, restrained design. Sometimes the most elaborate houses – it’s hard to call them homes – are not at all inviting. He visits some extraordinary properties, he remarks that the 60-seater dining room in Indigo Slam, a Sydney “residence”, probably seats more people than the dining room at Áras An Uachtaráin.

Here, some homes are remarkable for what they don’t have. Several leave out air conditioning units in favour of design-led solutions. “They’re all thinking about how to get air moved around,” Bannon says. “They’re trying to get rid of the AC. We need to be thinking about this, about our use of fossil fuels, even cars are moving towards electricity.

“I’m in the middle of my own project at the moment and I’m doing everything I can to be energy efficient and get it up to an A-rating.”

His “project” is his new house. And he is as excited about this as one might expect. It’s a 1930s home in Dublin’s Drumcondra to which the 46-year-old and his wife, Louise, who is also Financial Director of Dermot Bannon Architects, are applying a “modern twist”. He is determined to make it fossil fuel-free. “It’s very simple, it’s all about insulation. It’s like going out for a walk. You don’t plug yourself into an electric blanket and walk around pulling a generator. You put on a big heavy overcoat. At the moment we’re insulating the existing house. We’re triple glazing the windows. We’re having an air-to-water heat pump.”

A what-now? “It’s instead of a boiler. It takes the heat out of the air – like the reverse of a fridge – puts it into water which then goes into your under-floor heating.”

He says he’s always lived in older houses and “always been chasing draughts” and certainly old houses are colder. But there’s a charm to older Irish houses that it’s hard to mimic with new-builds. Why, then, do we seem so keen on them? “Absolutely there is an obsession with new houses. There’s always a draw to a new house. It’s about not having to do work – I get it. From the time we bought the house and went sale agreed, it’s giving up a year of your life. But older houses have great proportions and are in great areas, well serviced with bus routes. I see the benefit of moving into an established neighbourhood. We like living in the area and the kids [Sarah, James and Tom] were in school here.”

He says they are doing everything to retain the original features in the house – including the fireplaces – despite it not being a protected structure. “I love our architectural heritage. We bought an old arts and crafts house. What we’re doing is putting a modern twist on it. We’re being true to the original house.

“There’s something beautiful about these older places. They don’t build new houses in the city centre. I would rather invest the year in doing up the house. I have the privilege of being able to drop my kids to school in the morning, I wouldn’t swap that for a brand new house. I love living in the city.”

There is certainly an argument that we often fail to protect what we have and recognise its value. And this is especially the case when it comes to the built environment. “I’m a conservation architect as well and I would often see the merits in some of the most mundane things that I think in 20 years’ time, 30 years’ time it will be incredibly important.

“I was always a big advocate for the 1940s fireplaces – those beautiful curved ones – when everybody was ripping them out of homes, they were keeping the ones that were in Georgian homes and Victorian homes, but anything from the 1920s, 1930s they weren’t keeping. There’s a huge amount of wealth of architectural details in those houses from the 1920s and 1930s and they’re not protected.

“The house I’m renovating is not a protected structure but I’m keeping every door and keeping every fireplace, keeping every bit of coving, I’m keeping the skirting boards. It’s really important for me to keep the trace of what the house was like. I don’t want to sanitise it.”

Of course, Bannon’s house will always be of interest. And the chance to nose around the home of Ireland’s favourite architect was not passed up when he put his house on the market last year. “I was really shocked by how newsworthy it was. I was a bit surprised with the level of interest. It was a bit unnerving. I sometimes forget because we have a very normal life.

“Room to Improve has been amazing to me. There are incredible upsides, and then there are downsides, one of which is your privacy. I don’t mind for myself, it was more that it was the family home. I think we had around 100 people through the door and about 80pc of them had no interest in buying whatsoever. We tried to keep it private but then once people got wind of it, it was all over the place.”

In the middle of the sale he suffered a pang of paranoia over some underpants – yes, those underpants.

“My aunt died in the middle of the sale and I got so paranoid. All our clothes were in the wardrobes and I had to go down to Dungarvan for the funeral. I took all my underpants out of the wardrobe because I thought people might go through them. It was fine in the end. Instead of being annoyed about it you just have to prepare yourself.”

Part of Bannon’s own USP is his excitement, – the Duracell bunny of primetime TV. But beyond that he is passionate and sincere about his field. He says he can sometimes be “obsessive” when it comes to building design. And that he first became aware of the importance of public spaces as a child visiting his granny.

Of course the housing crisis and the impact of the crash will always loom over his work. He believes that millennials have the “right” attitude towards housing and living and we are witnessing a generational shift in the market.

“There is a shift. My generation – the Pope’s children – our mantra was always to get yourself on the ladder. That’s what you did. You didn’t enjoy yourself. You saved for a deposit through your 20s and 30s. Then you moved out to wherever you could afford.

“Then the crash happened. There’s a whole generation of people now who feel like they’re doomed, that they can’t afford to buy a house and they never will. I look at that generation and see their priorities, they’re different. They’re resigned to renting. Or instead of thinking, ‘Where can I afford to buy a house?’ They think, ‘I’d rather have a smaller house that I rent.’ They’ve started to think about the lifestyle. Once the shackles of a mortgage are removed, you they start to see the advantages. They don’t have cars. If they need one, they rent it. They really think about their life. For them, a short commute is really important. They want to live beside facilities, where they can socialise. They have it right.”

None of this, of course, addresses the housing crisis – a difficult and complex issue that doesn’t offer a simple solution. But there are some aspects of the crisis which merit further exploration. “We have around 2 million houses in the country. But we have around 850,000 families and 1.75m family homes, so 900,000 homes are under-occupied. So we keep talking about dwelling units but we should probably talk about bed spaces. That shows where the imbalance is. We need to start building more diverse housing. Because people don’t want and shouldn’t have to leave their area to downsize – especially when you’re retired, when you need to be more in your community.”

Of course opening this debate in the court of public opinion may well prove too politically toxic for the current Government. But there are ways to introduce a better housing mix. In the Swedish episode of Incredible Homes, Bannon visited a development by Danish ‘starchitect’ Bjarke Ingels, which, he says, proves that variety works. “It had one-, two-, three- and four-bedroom apartments, ranging in price from €300,000 to 1.8m. There was a lovely social and age mix, there were families and single people, within the one development. So if I had a small apartment, you have a family that might get a bigger apartment, you downsize when you’re a bit older and that can all happen within the one complex.”

You get the impression that he is something of a romantic when it comes to buildings and housing, enthusiastic but not impulsive. His approach to a housing isn’t “build, build, build” but rather to assess need and suggest the best means of provision. He doesn’t, for example, believe skyscrapers are a good option, saying the capital’s height is one of “Dublin’s USPs”, but he does believe that building up around the city should be examined. “If you go either side of the Liffey, you’ve got Ringsend – single-storey buildings; Ballybough is single-storey buildings. And then you go into the suburbs, Mount Merrion, Artane, Beaumont, they’re all very low density housing but they’re all only within minutes of the city.

“Whereas if you go to any other European city you’re a good five miles outside before you get to low density, but we don’t.”

Bannon is a good mix of high and low himself. But could he possibly be as nice as he seems on TV? He can. And I (finally) have the tape to prove it.