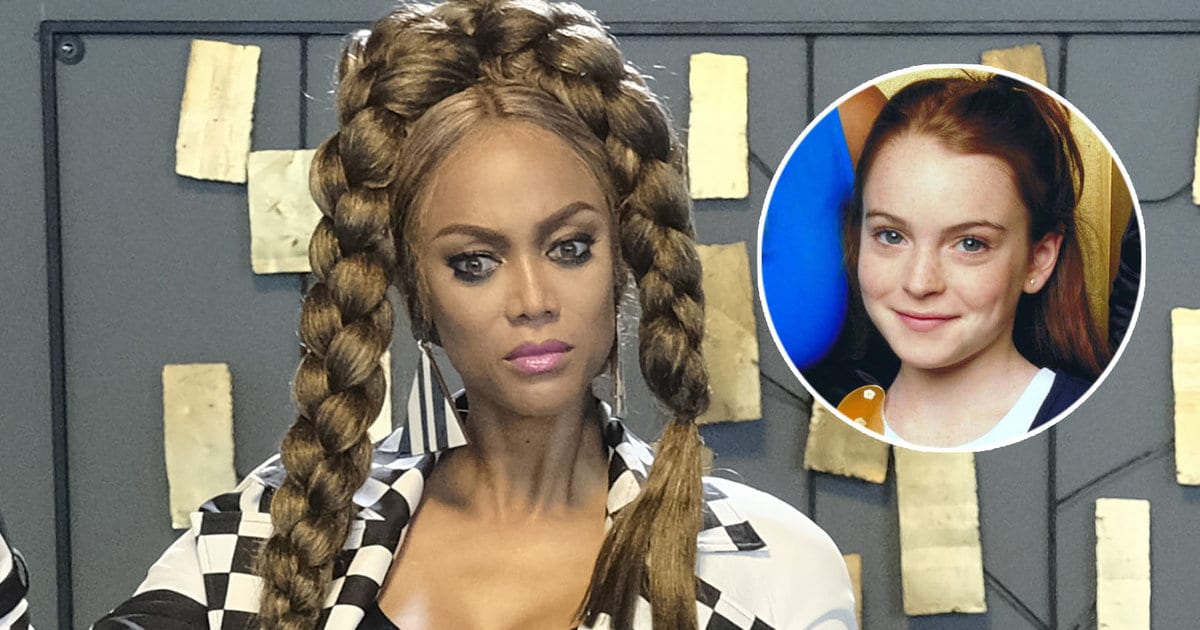 While the actress wasn’t available, Freeform’s doll-comes-to-life sequel found a way to connect this new story to Lohan’s narrative, and her face even makes an appearance!

Let’s be real, people were most excited about Freeform’s "Life-Size 2" when they thought Lindsay Lohan would be joining Tyra Banks in the unlikely sequel, but at least she was there in spirit on Sunday night.

Now transformed into a Christmas movie because why the hell not, Banks’ life-sized doll Eve came to life without the aid of Casey’s (Lohan) errant resurrection spell, though her spellbook was a huge part of the plot this time around, as well.

And that’s how "Life-Size 2" was able to connect its story to that of the young Casey after it became clear Lohan couldn’t be a part of this project. Writer Cameron Fay told TVLine that there was originally a substantial part for Casey in the sequel.

"When we realized it wasn’t going to happen, the idea had to shift," Fay said. "We knew that the fans loved Casey, but we were also expanding the mythology — the ‘Life-Size’ cinematic universe, I guess." Please don’t call it that.

And so the idea came to include the book as a nod to the original film and Lohan’s character, complete with a childhood pic of Lohan as Casey to really kick you in the nostalgia.

"It was subtle and simple to think that Casey had such a great experience with Eve that she wrote the CEO, like a little kid would," Fay explained. "It was our way of connecting it to the first movie but also telling a new story."

That story turned out out to be a little more sophisticated and wacky than the Disney Channel original, with Eve "growing up," as it were, and even finding love. She did still make time to help Grace (Francis Raisa), the new CEO of the company that manufactured her and brought her back to life.

To say this film is bad is to fail to appreciate just how great bad can be. Do you understand that Tyra Banks raps in this film? Do you grasp just how much Tyra Banks cannot rap. And yet, she still attempts to do so in this film? It is gloriously awful.

It’s all because Grace modernized and upgraded the Eve doll into something hip and "woke" and cool, complete with a pink protest hat. It’s like they’re really trying to be current and relevant here, but they managed to instead look incredibly out of touch.

But it’s all capped off with the wildest ending of them all, setting up a "Life-Size 3" that just has to take place mostly in Eve’s crazy homeworld of Sunnyvale. Yes, we finally see the home she was pining for throughout the first film and it’s not only a nightmare, it becomes the nightmare prison of her new chef boyfriend.

After all, if you agree to go home with the girl you’re into, you don’t expect to be transformed into plastic and shuffled off to a plastic world filled with Eves. That’s way too many Tyra Banks and way too crazy of a twist to just kind of drop in at the end of the film.

No one warned this guy he was going to become a toy and abandon his life, his food truck, his family and everything he knew? Is he really down with that? And how is he going to know which Eve is his Eve? And is he now built like a toy, if you know what we mean? Is he down with that?

There are a lot of questions and while we know it’s all so very stupid, we’re still wondering how the writers can just throw that ending in there and think no one is going to go, ‘WTF? How is this okay?’