Home » TV & Movies » How Many Rooms Does Buckingham Palace Have? 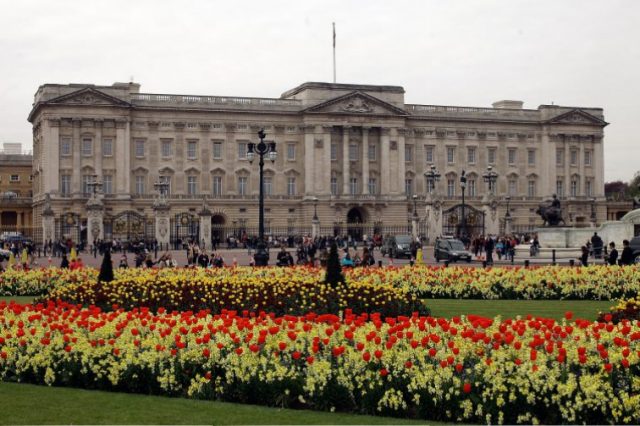 How Many Rooms Does Buckingham Palace Have?

We know the place Queen Elizabeth II and Prince Philip call home is big, but you probably didn’t know just how big. Well, it has its own zip code and the number of rooms that are actually inside of it is pretty astounding.

Buckingham Palace is where the royal monarchs have lived since 1837 and is one of the largest palaces in the world. It measures 354 feet by 390 feet, is 79-feet high, and boasts more than 800,000 square feet of living space. So just how many rooms are in the palace?

Here’s the answer to that and some other amazing things found only inside the famous London residence.

How many rooms are inside Buckingham Palace?

Her Majesty’s home has a whopping 775 rooms with 760 windows.

There is a ballroom, a music room, a movie theater, 19 staterooms, 52 royal and guest bedrooms, 188 staff bedrooms, and 92 offices. There are also 78 bathrooms so no one ever has to share or wait in line for one of those.

Another thing the palace has is an underground tunnel which connects Buckingham Palace to the Houses of Parliament as well as Clarence House where the Prince of Wales lives.

The reason it was built there could have been for emergency situations and may only be intended for that purpose today. However, it could also be just another security measure when the queen or other royals need to get from one place to another and therefore might be used quite often.

In addition to the underground tunnel system, there is a river that runs underneath certain parts of the palace.

The actual spot which Buckingham Palace was built on was swampland many years ago and one piece of that natural history that is still present today is the River Tyburn. The body of water flows beneath the south wing of the property.

It has its own doctor’s office inside

The royal residence even has it’s own doctor’s office inside. This makes perfect sense because the queen and her relatives don’t always want people seeing which medical facility or hospital they are going in and out of since that could lead to all kinds of rumors and hysteria. So in order to avoid that there is an office right inside the palace if they prefer to go there.

That office is even equipped to do surgical procedures in the event that a member of the royal family has an emergency and needs something done right away. It brings a whole new meaning to house calls.

Finally, any palace that has its own zip code is sure to have its own post office, right?

Yep, Buckingham Palace checks that box too. Pretty much anything the queen mails out is likely deemed private so instead of sending staff out to try and get a letter or package mailed for her everything is just sent through the palace’s post office.

Having that there is also very convenient for HM’s employees since they are allowed to use it as well.