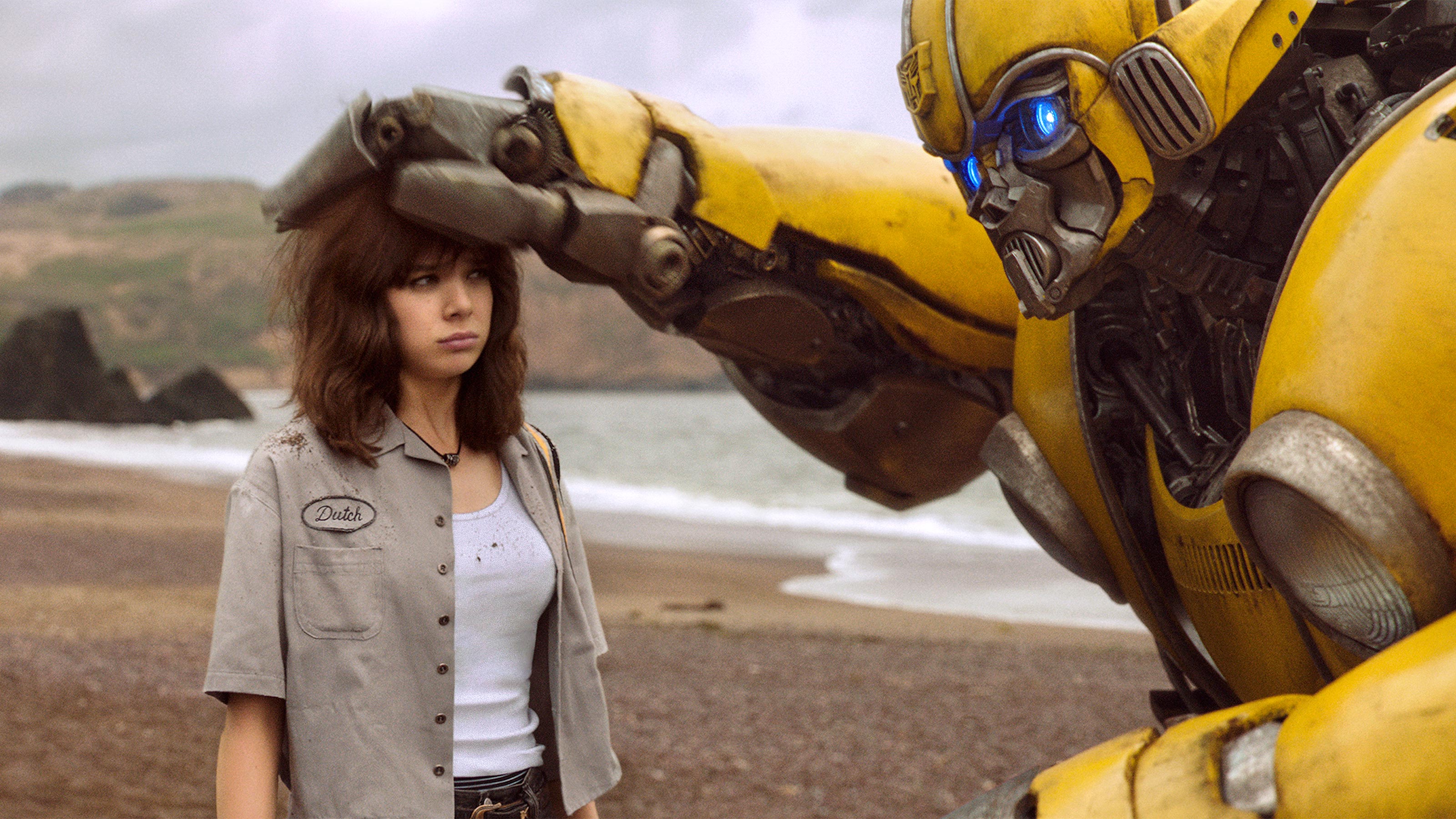 It was a late night on the set of Bumblebee, and Hailee Steinfeld was kneeling inside an airport hangar in Long Beach, crying her eyes out over the lifeless form of a shapeshifting alien robot who was wounded, drained, and dying.

The audience for Transformers films has basically felt the same for the past several years: Once strong, now depleted, and ready to move on.

That’s why the new stand-alone movie focusing on the sunny yellow underdog of the Transformers universe tried so hard to make a course correction, replacing the chaos, bombast, and puerile humor of the earlier movies with a soulfulness seldom found in movies about gigantic, metallic invaders.

For the first time in recorded human history, critics actually really like a Transformers movie, with Bumblebee opening in theaters tomorrow with a staggering 94% “fresh” rating, inspiring incredulous tweets like this from The New York Times: “Our critic @Glenn__Kenny wasn’t expecting Bumblebee, the latest movie in the Transformers franchise, to be so good. Read his review to find out what won him over.“

EW critic Leah Greenblatt also couldn’t believe her senses, writing: “Director Travis Knight actually has something much better and more human in store — tossing off the hectic heavy-metal nonsense of Michael Bay’s original vision and essentially rebooting it as a buddy comedy between an intergalactic robot and a scrappy teen.”

Now the movie, set in the year 1987, has to prove itself with audiences, fueling itself with nostalgia for the classic ’80s versions of the Transformers even as it upends the formula in other ways. Bumblebee makes a teenage girl the lead character in a franchise that for decades had an easier time acknowledging the existence of extraterrestrials than females.

“Men like emotion too, and girls like explosions too,” says Bumblebee screenwriter Christina Hodson, whose other upcoming projects include a Batgirl film and DC’s upcoming Birds of Prey. “It’s just a silly thing to kind of have this division of gender, but there certainly has been historically. One of the driving forces for me was putting a heroine on screen who my nieces could watch and feel like, ‘That’s who I want to be, and that’s who I can be.’ They’re the one on the adventure, not just along for the ride.”

As the scene in the hangar unfolds, Steinfeld’s character, Charlie Watson, quickly changes gears from grieving friend to rescuer — smearing away the tears and seizing one of the electroshock rifles the military used to subdue her metallic friend.

“Not you too…” she keeps muttering. The “too” refers to Charlie’s father, who left the gearhead adrift and heartbroken when he died from a heart attack. Rescuing and rehabilitating this alien visitor has given the misfit young girl new purpose, and although she couldn’t save her dad, she might still save ’Bee — and, in the process, the planet.

In a small room adjacent to the hangar, director Knight and producer Lorenzo di Bonaventura are watching on a bank of monitors, shaking their heads in amazement at how the then-20-year-old Steinfeld is bringing so much heart to a scene that could easily come off as cheesy or absurd.

“If I don’t care about the characters, I don’t care about what I’m watching. It’s just sound and imagery and noise and fury washing over me,” says Knight, who previously directed Kubo and the Two Strings, the 2016 animated film about a young boy who summons an evil spirit from the past. He is also CEO and a longtime animator with the stop-motion studio Laika, so getting people to care about inanimate objects infused with life is part of the reason he got the Bumblebee job.

“If your best friend was a 13-foot robot, how would the normal high school stuff and other struggles that you’re going through at that age be enhanced or completely undermined by having this giant metal monstrosity around?” Knight asks. “That’s one of the things that we play around with Bumblebee and Charlie, in addition to the big stakes of robots destroying each other.”

Among his changes was making Bumblebee less of a flesh-mangling clockwork and more of a huggable machine, similar in robot form to the VW Beetle shape he assumes in “disguise” mode. That simplified design had the bonus effect of making Bumblebee more relatable to the audience.

It’s easier now to see the “person” inside the machine. Plus, the fight scenes with bounty-hunting Decepticons Shatter (voiced by Angela Bassett) and Dropkick (Justin Theroux) are cleaner and easier to follow — and care about.

When Bumblebee is hurt, the audience has to feel it, too.

“One of the key touchstones of this film was E.T.,” Knight says. “E.T. was the first film that ever moved me to tears. I was 8 years old when I saw it in the theater with my mom, and I couldn’t believe what I was seeing. It moved me deeply. I’d never cried at any movie before. It really was this kind of odd, moving portrait of childhood loneliness. It was about empathy. That’s really ultimately what this film is about, too.”

As the rescue sequence on the Bumblebee set goes on, Charlie blasts the fallen robot with the electro-pulse gun, using the weapon as a makeshift defibrillator. If you think the life of a robot is something no one would care about, you just hit on where the earlier movies went astray.

For Charlie, saving Bumblebee has deeper meaning. She wasn’t there to save her dad when his heart failed him. But the things she learned about machines from her old man may just save this living mechanism she has befriended.

“Charlie and her dad, their relationship was based on their time spent together in the garage working on cars,” Steinfeld says during a break in shooting. “I like to think that everything she knows, she was taught by her father. She has her dad’s car, which does not run, and it was their project together. As soon as he died, she struggled with trying to fix it by herself, but it was just too hard. It’s not progressing, it’s not going anywhere. It’s emotionally hard for her and physically she cannot accomplish what she’s trying to do.”

So, she goes out and starts her own journey of finding her another car to fix. That’s how Charlie discovered a rundown Volkswagen Beetle in a junkyard where she frequently scavenges for parts. It just so happened to be a wounded alien soldier, recuperating while trying to reclaim memories of his original mission.

Now, the robot she revived is sprawled in a hangar after being captured by American military forces led by Agent Burns (John Cena) and later seized and tortured by his Decepticon pursuers.

Screenwriter Hodson clearly crafted the scene as a metaphor for Charlie trying to save her father, but it also could be seen as an echo of this movie’s mission: Saving Bumblebee might just revive the entire Transformers franchise.

“We’re making a very distinct decision, which is if you’re a Transformers fan, you want the intimacy of the experience in the way you had it as a kid,” says di Bonaventura, who has produced all the Transformers films since 2007. “It was in your living room, you had a relationship with the robots. Here, it’s on the screen again.”

The makers of Bumblebee drew directly from the original 1980s cartoons, which for all their flaws did manage to create a toy box full of memorable characters, largely dismissed or ignored by previous Transformers live-action films. An opening battle sequence in Bumblebee set on the robotic world of Cybertron (which EW will explore in detail once the movie opens) is populated by dozens of characters who were under kids’ Christmas trees in 1984.

Like Knight, Hodson also invokes E.T. and other Amblin movies from that era made by Bumblebee executive producer Steven Spielberg as a wellspring of inspiration. “As an old, curmudgeonly grown-up, I always will be like, ‘Well, they don’t make movies like that anymore,’” she says. “I wanted to bring that back a little bit.”

The success of similar retro-vibe stories like Netflix’s Stranger Things and the remake of Stephen King’s It proves Bumblebee is tapping something powerful. Something that was lost, but could be found again.

“A lot of us have been saying, ‘[Movies] were better back then,’” Hodson says. “Now we’re bringing them back and people are like, ‘Yeah, they were better!’”