Home » TV & Movies » ‘How about a bit of impartiality?’ Naga Munchetty slammed for ‘trying to catch out’ Shapps 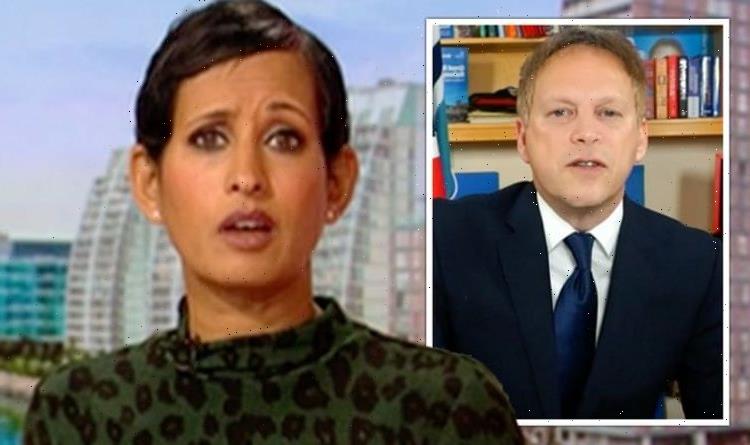 ‘How about a bit of impartiality?’ Naga Munchetty slammed for ‘trying to catch out’ Shapps

The Transport Secretary joined BBC Breakfast host Naga Munchetty via video link as he insisted the government “can’t take risks” over the new coronavirus variant which has been identified in six southern Africa countries. Grant Shapps explained the government acted quickly to suspend flights from those countries to stop the spread of the virus. However, Munchetty was keen to get specific detail about when the government was alerted to the variant and how long it took to tell the public. Her grilling angered many of those tuning in who claimed the journalist was “trying to catch out” the MP.

“Is this the quickest this could have been put in place?”

Shapps replied: “Yes, we have acted immediately actually on the day the four Chief Medical Officers in the UK met together and came and advised us. Within an hour or two we made these changes so we acted extremely fast.”

Munchetty asked: “So you knew about this a few hours ago because these announcements were made last night.”

Shapps answered: “Yes, I think I’m right in saying the Chief Medical Officers met around four and five and we met right after them.”

Munchetty cut in: “I was under the impression… I saw this variant was known about three days ago.”

Shapps explained: “The variant itself was uploaded to Gizade, which is the national website which reports these things.

“Bear in mind variants are reported every single day, that’s not important.

“What is interesting about this one, and the Chief Medical Officers met yesterday afternoon and agreed, is it is the most significant variant they have encountered and there’s a lot of concern about it escaping the vaccine and that’s the thing they were concerned about and came straight to us yesterday afternoon.

“An emergency meeting was held and we’ve taken the action immediately to stop those direct flights and the only people who can come back are British citizens or people with citizen, residential rights here.”

Taking to Twitter to comment on the interview, Mark Williams argued: “#bbcbreakfast Naga, let your interviewees answer your questions. And how’s about a bit of impartiality?

“Always always always trying to catch your interviewees out with snide little remarks and follow ups. It’s getting very boring.”

@LoveUKWildlife asked: “Why can’t we listen to an informative interview on #BBCBreakfast?

“All I seem to hear is the presenter trying to trip the interviewee up, interrupt them and rudely talk down to them.”

Cindy McCallum added: “So so bored with Naga constantly trying to “catch out” anybody that she is interviewing!!

“Let’s have a proper item where she actually listens ….. #nagamunchetty #BBCBreakfast.”

However, @doddsy tweeted: “This time it’s Grant Shapps wheeled out to defend another appalling judgement call by a man called Boris Johnson who isn’t fit to be Prime Minister.

BBC Breakfast airs daily on BBC One from 6am.