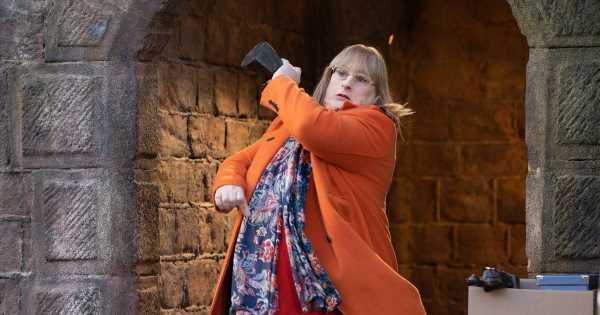 Hollyoaks star Annie Wallace has revealed that there are "still secrets to be kept" despite Sally St Claire finally confessing to being PC George Kiss' mystery killer.

The corrupt copper was brutally murdered in dramatic scenes which aired last month, and fans have since been eagerly waiting to find out who bumped him off.

After weeks of speculation, it was finally confirmed that Hollyoaks High headteacher Sally was responsible for George's death during Wednesday's first-look episode.

Viewers were originally led to believe that Theresa McQueen (Jorgie Porter) had committed the crime after she confessed to killing the policeman to Goldie (Chelsee Healey).

Nearby, John Paul McQueen (James Sutton), who had been previously been arrested for the murder but was later released under investigation, couldn't believe his ears but agreed that the family should stick together and pin his boyfriend's murder on PC Smith.

As Theresa was taken down the station for questioning, Sally couldn't handle the pressure and admitted it was her who killed George.

The emotional character confessed to John Paul that she was the person who murdered his abusive boyfriend as viewers were shown flashbacks to the day of the crime.

George went to attack Theresa but Sally protected her and struck George over the head with a bookend.

Hollyoaks star Annie has teased aftermath of Sally's shock confession and what fans can expect from upcoming episodes.

The 56-year-old TV personality, who joined the cast of the Channel 4 soap in 2015, told Daily Star: "The fallout is obviously initially what are we going to do about John Paul?

"Everyone, well the McQueen family, knows the truth, eventually – but it doesn't all come out because don't forget Sally's told John Paul, but the only people who know are John Paul and Theresa.

"She doesn't instantly go to the family and tell them it was her. There are secrets still to be kept.

"I think the overriding thing about this whole storyline is about how far the McQueen parents will go to protect their children."

Annie added: "I think the overriding thing about this whole storyline is about how far the McQueen parents will go to protect their children.

"Sally will go to the ends of the earth to protect John Paul. She's only had him back in her life for just over five years and he is everything to her."

The Scottish actress revealed that "murder wasn't on the top of Sally's list" and that the character will struggle to cope with the fact she has taken another person's life.

She said: "This is a massive deal for someone who thinks she's a good person, educator and protector of children.

"She's got a moral core and this is the worst thing a human being can do.

"How will that redefine her and who she is?

"She doesn't want anyone to suffer anymore. She thinks she can stop it but she's got her own issues too."

Opening up about the moment she found out Sally was going to be unmasked as George's killer, Annie said: "To be told that this was going to be happening to Sally was really exiting because she's been a bit quiet for a while and we've not seen her on TV very much.

"People have been saying 'what's happened to Sally' so be told that this was going to be a big part of this year for Sally was a delight.

"It's been damn hard work and I don't think I've got any tears left. There's been a lot of crying and a lot of shouting. It's very draining but rewarding."

Hollyoaks airs weekdays on Channel 4 at 6.30pm followed by first look episodes on E4 at 7pm