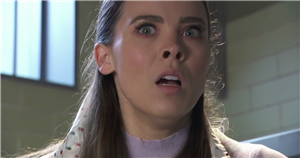 Hollyoaks confirmed Liberty Savage's (Jessamy Stoddart) fate after she was left for dead in recent scenes.

Liberty was left lifeless in The Folly as Summer assaulted her with a shoe after she told her a secret she'd "take to the grave".

The search was on for missing Liberty during Monday night's first-look episode on E4 following her sudden disappearance.

A concerned Damon Kinsella (Jacob Roberts) received a worrying message from his missing girlfriend saying she needed a time away.

He quizzed Sienna on her disappearance and the teacher instead she didn't know the whereabouts of her sister.

Another added: "Liberty looking amazing after being knocked unconscious and kidnapped."

While a fourth social media user said: "Summer is doing a full on Sienna and going full kidnapper."

Liberty made a shock discovery during Friday's first-look episode as she happened to overhear Sienna telling Summer to break off her engagement to Brody Hudson (Adam Woodward).

She overheard Summer telling Sienna: "I promise you, I have no intention of marrying Brody. It's you I want."

"Then prove it," Sienna dared her as the pair made their way to the bedroom.

Summer later checked her voicemail and listened to an earlier message from Liberty explaining she was on the way to her flat to drop some wedding shoes.

The scheming businesswoman then glanced over towards the open door to notice her shoes dropped on the floor.

Liberty had gone to confront Sienna at her flat, where she insisted this was all a part of her sister trying to manipulate Brody in a new way.

"If you breathe one word of this to Brody, I'll make everybody believe you're off your meds again," Sienna threatened her younger siibling.

"You're my sister. I don't want to hurt you, so please don't give me a reason to."

After insisting that was "the last time" Sienna would ever get to call her a sister, Liberty stormed out.

However, it wouldn't be long before she'd be confronted by Summer.

The evil cupcake business owner didn't take kindly to being dismissed, explaining that she wished Brody "was dead" because of the role he'd had in Cormac's death.

With Liberty now putting together that Summer was the one behind Sienna's shooting, Summer physically attacked her and vowed it'd be a secret Liberty would take to the grave.

Liberty was seen alive and tied up in an abandoned store room at the end of Monday's dramatic episode.

Will Damon be able to save his girlfriend before it's too late?

Hollyoaks airs weekdays on Channel 4 at 6.30pm followed by a first-look episode at 7pm on E4