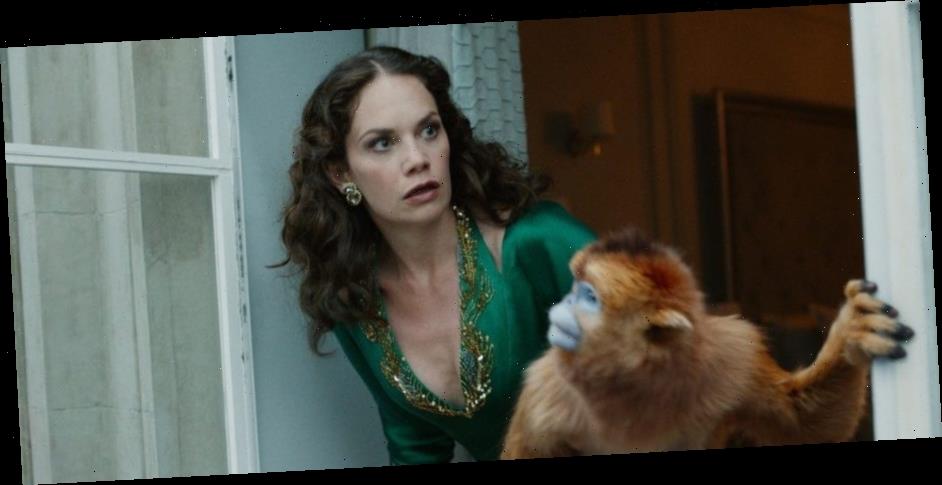 I’m not usually one to encourage people to stick around with a show because “it gets good later!” But if newcomers to His Dark Materials were uncertain about this series after the intriguing but confusing first episode, then the second episode may be the one to hook them. Not that “The Idea of the North” is any less mystifying or provides any more answers to the many mysteries that it’s juggling. But with its mid-episode reveal — which comes as a surprise even to longtime book fans — it dramatically opens up the world(s) of the HBO fantasy series.

No More Monkeying Around

Lyra and Mrs. Coulter arrive at Mrs. Coulter’s glamorous London apartment and immediately busy themselves with preparations for their great journey north — after Mrs. Coulter buys Lyra a whole new wardrobe and parades her around her elite social circles. Lyra — so awed by the dazzling, extravagant life that Mrs. Coulter leads — is too delighted to even notice at first that she is being treated like a doll. But soon Lyra realizes that she is being kept a prisoner in that beautiful but suffocatingly small apartment, and that something is very wrong with Mrs. Coulter.

This episode is a real showcase for Ruth Wilson, who peels back the layers of Mrs. Coulter’s icy façade in unsettling ways. The magnificent microexpressions that she so elegantly shifted between in the last episode give way to even bigger and more explosive displays of anger that are truly terrifying. But it’s in Mrs. Coulter’s quieter moments that Wilson really makes her case to be the show’s MVP. Despite Wilson allowing us entry into Mrs. Coulter’s more tender moments with Lyra — washing Lyra’s hair in the bath, smiling sweetly at Lyra’s antics — there’s an even deeper well of emotion that suggests we’re only seeing the tip of the iceberg. “I’ve never been sure about heights…I could never resist the urge to jump,” Mrs. Coulter ponders to Lyra with a blank expression that is both transparent and opaque at the same time, vulnerable and hard. Wilson’s Mrs. Coulter is such a multifaceted villain that you can’t really blame Lyra for being slow on the uptake that she is being used.

It takes a few more alarming events for Lyra to realize that Mrs. Coulter is not the noble adventurer she believes her to be. After inquiring several times about the search for Roger, Lyra is curtly brushed off by Mrs. Coulter, who only encourages her to study and try out new dresses. Hurt by Mrs. Coulter’s callousness and puzzled by the noises she hears in the walls every night, Lyra investigates and discovers that Mrs. Coulter has the unnatural ability to separate herself from her monkey daemon for long distances. Wilson again cuts a menacing figure in this scene, swanning around in a white silk gown and addressing Lyra in an airy voice before violently smacking her daemon — the first of many instances of disturbing self-harm.

Dafne Keen is a little more comfortable in her role as Lyra, her slightly cautious performance working well with Lyra’s new surroundings. Left to fend for herself with only her daemon Pantalaimon to turn to as she fast loses trust in the adults around her, we see glimmers of her personality beyond “YA fantasy heroine who isn’t like other girls.” One of Lyra’s defining traits is that she’s a seasoned liar, spinning tall tales that she confidently tells Mrs. Coulter, only for her reckless boasts to backfire on her when she lets slip her knowledge about Dust, to Mrs. Coulter’s displeasure. It’s here that the dynamic between Lyra and Mrs. Coulter shifts: from the cozy atmosphere of doting guardian and her doe-eyed protégé, to a claustrophobic cat-and-mouse game.

Meanwhile, Roger (Lewin Lloyd) is being kept at a Dickensian den that looks straight out of Oliver Twist. While groups of frightened children kidnapped by the Gobblers huddle around old metal cots, a Nurse Ratched-like nurse calmly surveys them. There, Roger unites with Billy Costa, the kidnapped Gyptian boy from the pilot, and promises him that Lyra will rescue them. But it turns out Roger is not too far off: A little later, we see John Faa and Farder Coram leading an expedition of Gyptians who storm that same den, but find it empty — except for Billy’s sweater.

Though the Gyptians are always one step behind the Gobblers, who move through several dinky hiding spots in London, they are emboldened by this discovery. The Gyptians’ storyline still feels far removed from Lyra’s subplot, but it gives a good dose of action-packed thrills to counterbalance the lulls in Lyra and Mrs. Coulter’s cat-and-mouse game. James Cosmo’s comforting gravitas as Farder Coram and the quiet authority Lucian Msamati lends John Faa give nice weight to this storyline, which does feel like wheel-spinning until it can connect with Lyra’s storyline.

Through the entire episode, Lyra barely leaves the apartment, which transforms from a palace, to a prison, to a battleground. The narrow halls and minimalist designs of the apartment work in favor of this shift, as Lyra creeps around to spy on Mrs. Coulter when she’s visited by two Magisterium priests, who order her to stop her work —provoking her to anger, which she barely keeps repressed until they leave and she explodes in a feral tantrum against Lyra (Wilson’s abrupt growl before her monkey pounces on Pan is a wonderful touch). As Lyra writhes in pain at her daemon being attacked, Mrs. Coulter in her rampage accidentally reveals that Asriel is her father, confusing Lyra even further and deepening the rift between them. Later Lyra, having lost all trust in Mrs. Coulter, takes advantage of her captor leaving the apartment to snoop in the study, discovering plans for a station for human experiments run by the mysterious “General Oblation Board.”

Lyra’s mini heist — crawling through the vents in the walls that she discovered the monkey daemon had been using — takes place just as Mrs. Coulter makes her way to the Gobblers’ den of kidnapped children, arriving like a generous Mother Teresa. As Mrs. Coulter sweetly tells the children stories of their upcoming adventure north and promises to take letters to their parents, Roger defiantly writes a letter to Lyra, which Mrs. Coulter promptly burns.

And now we come to the game-changing twist of the episode: Lord Boreal (Ariyon Bakare) who we had been introduced to last episode as an agent of the Magisterium, is heading his own investigation into the fate of Stanislaus Grumman, the Jordan College scholar whose frozen head Lord Asriel (James McAvoy) had supposedly unearthed and used as a bargaining chip to get extra funds for his expedition. Kneeling in prayer at the church in Jordan College, Boreal meets with The Master (Clarke Peters) to accuse him of heresy for funding Asriel’s trip and to demand to see Grumman’s skull. Neither of these statements is met warmly by The Master, who throws Boreal out of the college. But Boreal only sneaks into the crypts later that night to look for Grumman’s skull, which he quickly realizes is a fake.

Boreal’s entire storyline is a new addition to the series, so even book readers weren’t prepared for what happens next: Boreal heads to an abandoned greenhouse, where there lies a portal…to our Earth. Boreal slips through this ethereal window in the air, which takes him to modern-day Oxford, complete with smart phones, traffic lights, and lots of wide shots of buses. This is a huge reveal to drop so early — the premise of parallel worlds isn’t even hinted at until the end of the first book. But like I remarked earlier, His Dark Materials has its eyes on the big picture, and that big picture involves Boreal and his espionage thriller subplot between worlds.

It’s still unclear what Boreal’s motivations are, but it is clear that he is a double agent with his own agenda. Boreal has long established roots in this world, with a car under his own name and a phone that he uses to get in contact with an accomplice at a coffee shop. “You have better coffee than us,” Boreal comments to the man, who is antsy to see Boreal’s snake daemon and hear more about this world “so alike” to our own, as if the show couldn’t make clear enough that this is our world. But Boreal cuts to the chase, ordering the man to look into Stanislaus Grumman’s whereabouts and whether he has also found a way into our world.

Boreal’s story finally crosses over with Lyra’s at a party that Mrs. Coulter is holding at her apartment — the first and only instance we actually meet Boreal in The Golden Compass book. But the show smartly ups his role to tease later events and let us know that they’ve got the story’s endgame in mind. At the party, where Lyra is obediently serving drinks to guests, a journalist approaches her to inform her that Mrs. Coulter runs the Gobblers, the nickname for the General Oblation Board. But before the journalist can talk to Lyra any more, Mrs. Coulter and Boreal intervene. Boreal takes the journalist out of the party and kills her by crushing her butterfly daemon (a major taboo in this world, which the show kind of fails to communicate), but Lyra slips out of Mrs. Coulter’s grasp and finally is able to escape the apartment. Lyra wanders the streets of London, looking uselessly for Roger before she crumbles in front of a doorstep, exhausted. But before she can rest, Pan is lured by the bright-eyed fox demon owned by the child-kidnapping Gobbler, and the episode ends on a cliffhanger of Lyra being grabbed.

HS2 should go ahead despite soaring costs
World News