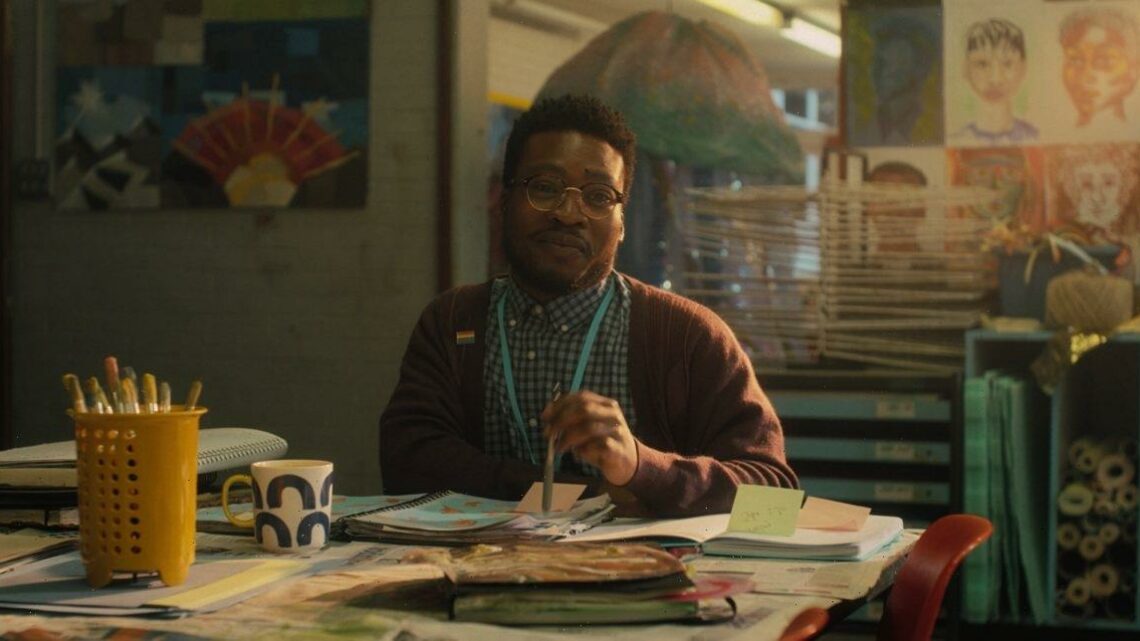 Fans got hooked on the romance story between Charlie Spring (Joe Locke) and Nick Nelson (Kit Connor) in Heartstopper. The Netflix series did explore other relationships and budding feelings between two other central characters. Heartstopper creator Alice Oseman reveals if Netflix approves a new season, it will follow the graphic novels and include a love story between teachers.

While Charlie may have a close group of friends and has been openly gay at school since the year before, he still battles his emotions. In Heartstopper, fans meet his art teacher Mr. Ajayi, played by actor Fisayo Akinade. Mr. Ajayi is also gay and becomes Charlie’s friend and guide when it comes to feelings and needing someone to talk to.

Fans learn Charlie used to spend lunchtime in Mr. Ajayi’s art room because of the bullying. Mr. Ajayi asks if Charlie is okay and if he needs to stop the bullies again. While Charlie says he is fine, he confides in Mr. Ajayi about his problems with Ben (Sebastian Croft). Charlie also tells him about his feelings for Nick without naming him.

Charlie sees Mr. Ajayi’s art room as a safe space in the rest of the series and can trust him. Charlie even lets Nick join him for lunch in the classroom. Mr. Ajayi is not blind to the turmoil Charlie is facing and even tells him, “Don’t let anyone make you disappear, Charlie.”

Fans on Twitter love the Heartstopper character created by Oseman, and one fan commented, “forever wishing i had a teacher like mr ajayi.” Oseman teases Mr. Ajayi’s story is far from over if Netflix approves new seasons.

Alice Oseman’s ‘Heartstopper’ novels include a romance for Mr. Ajayi

Feeling secure in a romance is not only for the leading characters in Heartstopper. In an interview with Digital Spy, Oseman reveals Heartstopper encompasses the first two graphic novels. With the main characters and their stories now established, the series can explore new storylines.

One of the storylines includes teachers getting their own love story like Mr. Ajayi. “If we do get a future season, we’ll be moving into volume three of the books. And that is when the teacher romance happens. So in the show, we’ve already got Mr Ajayi, but in the books there’s also Mr Farouk, who comes in, in volume three. And they have this kind of interesting friendship going on in the background that eventually becomes something more,” said Oseman.

For fans, seeing more of Mr. Ajayi in a Heartstopper Season 2 would be a dream. When Oseman posted the casting for the teacher characters, fans of the graphic novels quickly noticed the absence of Mr. Farouk. Even in 2021, Oseman had high hopes Netflix would renew Heartstopper for new seasons.

Who is Mr. Farouk in Alice Oseman’s ‘Heartstopper’ graphic novels?

Die-hard Oseman fans know full well who Mr. Farouk is in the novels. But there are a few things to know for fans who first learned of the story and characters through Netflix’s Heartstopper, especially if there is a Heartstopper Season 2. Fans know more about Mr. Ajayi in the series, like his sexuality and his ability to empathize with Charlie’s LGBTQ story.

According to the Heartstopper Tumblr page, Mr. Farouk is the school’s science teacher. He is depicted as being lighter-skinned and having brown or dark blonde hair. He is also shown with a tired look and bags under his eyes. Mr. Farouk joins Mr. Ajayi as a chaperone for the school’s Paris trip in the novel. Snippets of the novel reveal they were friends and start to see each other as something more.

Brazilian siblings reunited at hospital for first time in 15 years