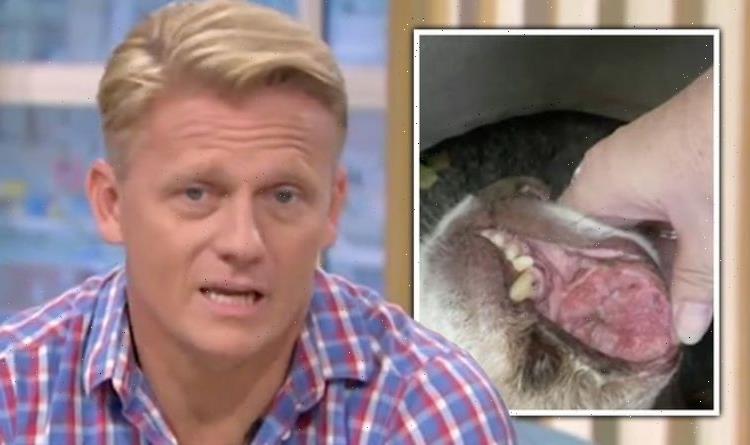 Alison Hammond and Dermot O’Leary invited Dr Scott Miller onto Friday’s This Morning to help concerned viewers who wanted some advice about their pets. The vet was taken aback when he was shown a picture of a worrying growth in a viewer’s dog’s mouth and sadly had to warn the viewer her beloved pet may have cancer.

For the ‘Call our vet’ segment, caller Alison phoned in to ask Scott’s opinion on a lump in her dog’s mouth.

Alison from Devon was worried about her 16-year-old dog called Ollie.

“About 9 months ago we noticed a growth on the inside of his cheek.

“Over time it’s got bigger, I’ve been to the vet and they’ve said because of his age and a little bit of a heart murmur they can’t operate.

Read more: Alison Hammond scolded as Dermot ‘gets rid’ of This Morning guest

“I’m going to go to the vets next week but I wanted your opinion – it’s just getting bigger.

“He doesn’t seem to be in any pain, he eats to the side so it doesn’t aggravate it he’s doing everything he normally does but I just wanted a second option.”

Scott replied: “Look bless you I’ve got to say we don’t want to diagnose things without seeing them.

“But I don’t like what I see there, that doesn’t look nice and cancer tends to look exactly as you would think it would and that does not look nice.”

“I would be concerned if that is something significant and the fact that it’s growing quickly in a short space of time would also suggest melanoma,” he continued.

“That said I know Ollie is 16 which is incredible and a credit to you.

“I know he has a heart murmur which is one of the reasons you’ve sat on your hands and not moved forward because of the chance he might not make it through an anaesthetic.

“Alison, my heart goes out to you on this one. That doesn’t look great and all I would say to you is you need to focus on the fact you’ve given him 16 wonderfully years.”

“You want to make sure his passing is kind and he’s not in any discomfort or any pain and I know you wouldn’t want that for him,” Scott advised.

“You’re going to have to work very closely with your [vet] and our love goes out to you because it may well be this is problematic.”

“Oh god,” Alison commented and Scott added: “Big hug going out to you.”

Concerned viewer @mrssallywilson tweeted: “@AlisonHammond watching the phone in with the wonderful Dr Scott (vet). Left heartbroken at the story of the dog who had the mouth problem. Hoping the lady owner is being looked after – not the nicest news to hear on National TV.”

@naomibyname wrote: “Gosh you phone in for advice and get told you need to have your 16 year old dog put to sleep ALL my love to that owner #ThisMorning.”

“@thismorning that poor lady that just gold told her dog may have cancer It looked like she was quickly dismissed. Is she ok? Did anyone stay on the phone to offer support? What a devastating thing to hear,” @Paulaexplorer9 added.

@michellesapiano shared: “@thismorning awe feel so bad for that lady who called into the vet about her dog…Dr Scott looked like he wanted to cry bless him.”

This Morning airs on ITV on weekdays at 10am.

Burden of Truth Series Finale Recap: Did Joanna and Billy Save Her Career and Their Relationship? — Plus, Grade It!