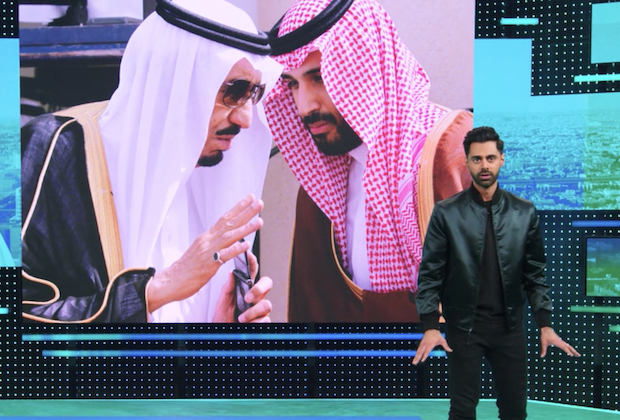 Hasan Minhaj has broken his silence regarding Saudi Arabia’s “very own Muslim ban.”

During Sunday’s midseason premiere of Patriot Act, the host addressed Netflix’s decision to remove an episode from its service after the Saudi government claimed that Minhaj’s criticism of crown prince Mohammad Bin Salman violated its anti-cybercrime law. The initial Patriot segment in question, which made its U.S. debut back in October, was a direct response to MBS’ involvement in the killing of Washington Post journalist Jamal Khashoggi. (Watch it here.)

After acknowledging the Saudi law, which prohibits “any content that impinges on public order, religious values or public morals,” Minhaj ran down a list of Netflix originals that are still streaming in the Middle East. Those include Chilling Adventures of Sabrina (a teen drama about “literal devil worship” and “a lot of premarital witch sex”), BoJack Horseman (an animated series about “an alcoholic horse-man who snorts cocaine”) and countless “evil cooking shows” that feature the consumption of “porky goodness.” Even more strange is the fact that Saudi Arabia hasn’t banned a subsequent Patriot Act episode that is also critical of the Muslim nation.

“This isn’t about just censoring one episode of a TV show. It’s about the precedent,” Minhaj explained. “Because as tech companies keep expanding, they’re going to keep running into more vague censorship laws — laws that can allow governments to pull any content at any time.

“Ultimately, [Saudi Arabia] doesn’t care about ‘immoral content’ that ‘impinges on religious values,’” he said. “They’re mad that a Muslim is airing out their dirty laundry.”

Video of the segment will be added if/when it is made available. In the meantime, hit the comments with your reactions to Minhaj’s response.