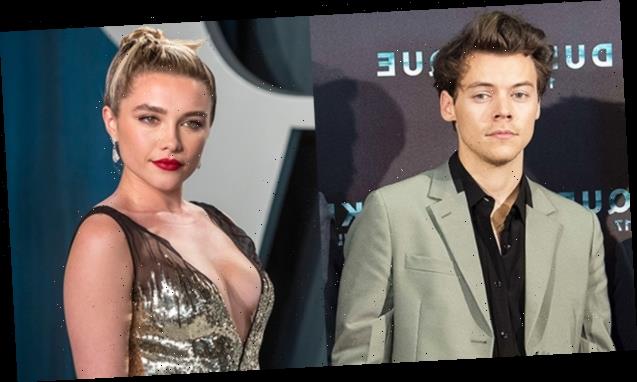 Harry Styles is returning to acting, starring opposite Florence Pugh in Olivia Wilde’s upcoming thriller. Fans couldn’t be more excited about the cuteness of their onscreen pairing!

Three years after making his acting debut in Dunkirk, Harry Styles is ready to return to the silver screen. The “Watermelon Sugar” singer, 26, is replacing Shia LaBeouf in Don’t Worry Darling, the psychological thriller directed by Olivia Wilde, according to our sister site Deadline. Details about the script are still being kept under wraps, but Harry’s fans are convinced that he’s playing the husband of co-star’s Florence Pugh‘s character. And yes, they are freaking out about this perfect (and hot) pairing.

“Harry and Florence being the husband-wife duo is so powerful,” one wise fan tweeted. “Florence PUGH and Harry STYLES in a movie together?? Am I dreaming,” To All The Boys I’ve Loved Before author Jenny Han — who knows a thing or two about chemistry — tweeted, as well. One fan people out a gif of Florence as Amy March in Little Women, perfectly encapsulating how all of Harry and Florence’s fans feel right now. One fan pointed out that Florence has a pretty stellar track record for onscreen romances: “Florence Pugh is winning at life… first she played a character who married Timothée Chalamet and now she’s gonna be married to Harry? living her best life tbh.”

Don’t Worry Darling also stars Dakota Johnson and Chris Pine, along with Olivia in a supporting role. Shia unfortunately dropped out of the project due to scheduling conflicts, according to Deadline. The film, written by Booksmart scribe Katie Silberman, takes place in 1950s California. An unhappy housewife, potentially played by Florence, discovers disturbing information about her seemingly perfect life in her isolated, utopian neighborhood. The rest of the film? Anyone’s guess!

This is the first role for Harry since playing a World War II soldier in the 2017 film Dunkirk. Aside from the Oscar-winning drama, Harry’s only credits are music videos and commercials. Florence had an incredible 2019, starring in critically acclaimed horror Midsommar, and landing an Oscar nomination for Little Women. She’ll next be seen as a Russian agent in Marvel’s Black Widow, premiering later this year.