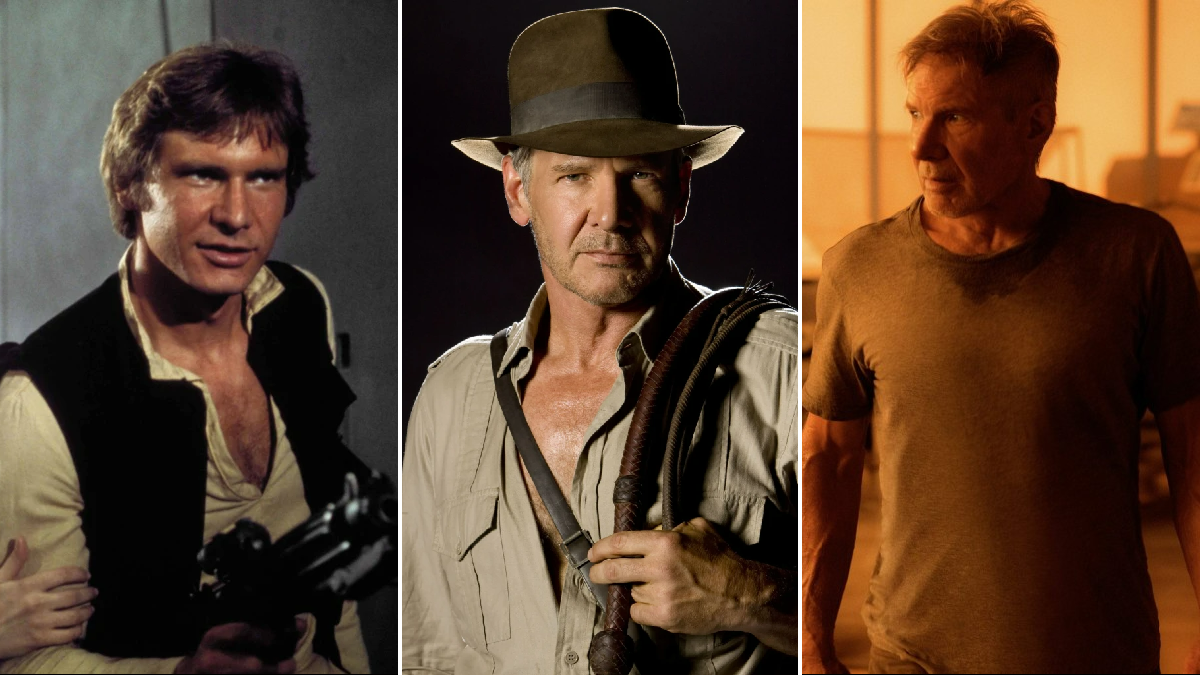 Harrison Ford turns 80 this week. We can hardly believe it either!

The American actor has enjoyed a stellar career, spanning seven decades, beginning with minor roles in Western films and counterculture dramas in the late 1960s.

In the early 70s, however, he worked on American Graffiti under director George Lucas, who subsequently cast Ford as Han Solo in his next project, Star Wars. From that point on, Ford’s career on the big screen went into the stratosphere.

He has starred as explorer Indiana Jones in all four of the franchise’s movies (with a fifth in development). In 1982, he was Rick Deckard in Ridley Scott’s Blade Runner – a role he reprised for Denis Villeneuve’s 2017 sequel.

Away from the franchise world, he was nominated for an Academy Award and a Bafta for his lead role in Witness, the 1985 Peter Weir thriller, and appeared in rom-com Working Girl alongside Sigourney Weaver three years later.

In the 90s, he starred opposite Gary Oldman as President James Marshall in Air Force One, and as Jack Ryan in Patriot Games. In 2017, he famously experienced TV personality Alison Hammond in full flow on This Morning, and in 2020 he starred in Call of the Wild.

But after so many appearances, what is his greatest role of all?

What would happen if a bunch of terrorists hijacked a plane that was carrying the President of the United States? According to action thriller Air Force One, the President would be Harrison Ford, and he would take matters into his own hands.

Ford’s President James Marshall is a veteran of the Vietnam war and a Medal of Honour recipient and finds himself battling not only those who have hijacked the plane, but the friends who betray him along the way.

When an Amish child is witness to the murder of an undercover police officer in Philadelphia, Ford’s police sergeant John Book must step in to protect the child from a corrupt police force. Ever the hero is our Harrison!

Ford was deservedly nominated for an Academy Award for his performance in this movie, but lost out on the night to William Hurt for his role in Kiss of the Spider Woman. Witness did win the award for best original screenplay, however.

We disagree with him on this occasion, but back in 1985 Roger Ebert reckoned that Ford had ‘never given a better performance in a movie’. Years later, French film writer Elena Lazic described his display as transcendent and ‘magic’.

Ford built his career on portraying dashing heroes with a slightly dark edge to them, and there may be none darker or more tortured than Blade Runner’s Rick Deckard.

In a dystopian 2019 Los Angeles, Deckard is a disillusioned cop who hunts rogue bioengineered humanoids known as replicants. The movie that surrounds Harrison is eerie, oppressive, and always drenched in rain. He is tasked with carrying the film on his sullen, burnt-out shoulders, and boy does he.

He reprised the role 35 years later, alongside Ryan Gosling’s K. Appearing late in the movie, hiding in the ruins of Las Vegas, Harrison is instantly recognisable and steps effortlessly back into Deckard’s shoes. He’s such a natural!

Sorry, Indy fans. We think we’re just too emotionally attached to Harrison’s other massive franchise to put Ford’s archaeologist extraordinaire atop this list. We really hope you understand.

First appearing in Raiders of the Lost Ark (1981), Ford traded blaster for whip and a galaxy far, far away for the deepest caves and became instantly iconic in another swashbuckling, suave, sexy role across three films in the 1980s.

His display was so popular and legendary with moviegoers that archaeologists credit him with completely upending stereotypes that had existed about the profession for decades. Way to go, Harrison.

Critics and fans were disappointed with the eventual 2008 sequel Kingdom of the Crystal Skull, but a fifth film is in development with an 80-year-old Ford set to reprise his role, and fans can’t wait to see what he’ll bring to the role next.

The one, the only.

A role performed so perfectly by Ford that it eventually spawned an entire movie of its own in 2018. Fans spent the entirety of Solo: A Star Wars Story’s runtime judging whether Alden Ehrenreich’s was up to the task of emulating Ford’s work.

His most famous moment in the role arrives in sequel film The Empire Strikes Back (1980). He utters the most famous response to the words ‘I love you’ that have ever been recorded: ‘I know’. Classic Han, and classic Ford, who improvised that line while the cameras were rolling.

As if that wasn’t enough, he then returned to the role in 2015’s The Force Awakens (then in 2019’s The Rise of Skywalker as a force ghost). Only, his 21st century Han was a different person entirely. A withered and exhausted man, broken by war and loss, who dies knowing that his son betrayed him.

You can watch the Star Wars movies on Disney+.

Is Jill Biden a doctor? | The Sun
World News