Home » TV & Movies » ‘Hand of God’: How Paolo Sorrentino Confronted the Greatest Tragedy of His Life With His Most Personal Movie

‘Hand of God’: How Paolo Sorrentino Confronted the Greatest Tragedy of His Life With His Most Personal Movie

Last year, Paolo Sorrentino turned 50, and realized he was ready to confront the greatest tragedy of his life. In 1987, the future filmmaker fulfilled his dream of attending a soccer match by his home team of Naples to see his hero, Argentine soccer maven Diego Maradona, in action. Sorrentino traveled to Tuscany to see the game while his parents stayed home. That night, they died from a carbon monoxide leak, one month shy of Sorrentino’s 17th birthday.

“It’s painful to talk about it,” Sorrentino said in an interview over Zoom this month. “And, indeed, it was very painful to make a film about it.”

Yet “The Hand of God,” the Netflix-produced drama that launches in competition at the Venice Film Festival this week, doesn’t exclusively dwell on that grim event. Instead, the story turns on the efforts of the writer-director’s fictionalized stand-in, Fabietto (Filippo Scotti), as he works through the fallout of his sudden orphanhood against the majestic backdrop of his native Naples, and the catharsis he finds from discovering his true calling as a filmmaker.

Like a lot of Sorrentino’s work, “The Hand of God” is rich with the textures of Italian life across multiple generations. Fabietto’s large family hangs together at a lavish seaside home, and the young man wanders through the stark, shadowy contours of Neapolitan architecture that often seems to reflect the enigmas of his existence. At the same time, the bittersweet effort represents a more grounded undertaking for the style-heavy filmmaker, who has become known from his Oscar-winning “The Great Beauty” and HBO excursions “The Young Pope” and “The New Pope” for dousing ostentatious visions of modern Italy with ironic distance.

With “The Hand of God,” Sorrentino had to set that aside to get personal. “When you perfect your style too much, you tend to become a bit superficial,” Sorrentino said. “I opted for a more simplistic style that I did not like before, but I thought this was the right time. It’s a film based on the perception of pain and joy of a boy, and it’s narrated through the eyes of the grownup man he’s become — that is to say, me.” 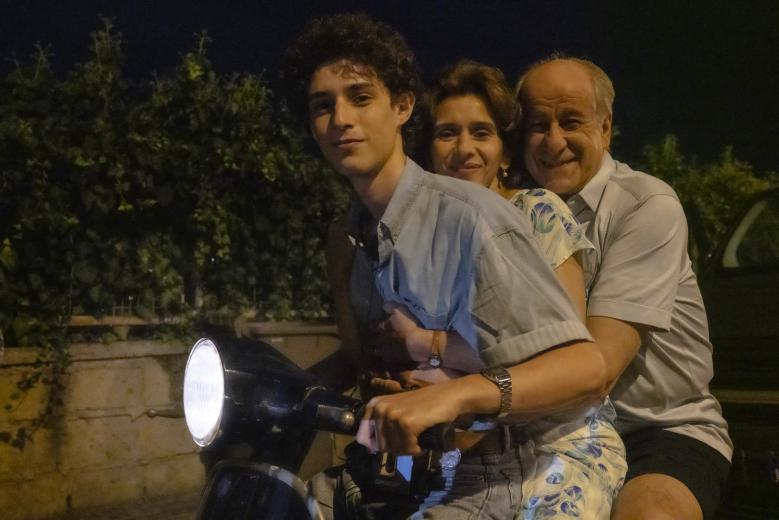 “The Hand of God”

“The Hand of God” finds Fabietto undergoing a series of vivid experiences, initially with the support of his vast family, including his older brother and a mentally unstable aunt (Luisa Ranieri) who becomes his first crush. As the young man endures heartbreak on multiple fronts, a sexual awakening and ultimately his creative calling, the movie evolves into a form of biographical justification for the work that has preceded it in his career: Sorrentino typically makes dense, visually daring stories about powerful men who wield authority to obscure their gentler side, from the prime ministers of “Il Divo” and “Loro” to Jude Law’s hectic papal figure. Through it all, Sorrentino’s work is loaded with hedonistic displays, with people who prefer to speed forward in life rather than wallowing in self-reflection, and he hasn’t been immune from that tendency.

“The Hand of God” explains how cinema served as Sorrentino’s salvation — and, until now, his shield. “I don’t think I’ll make another intimate film like this,” he said. “It was so difficult. It took me 20 years, and I’ve been thinking about it all that time. But this film gave me a stylistic key that I intend to explore for the future.”

Sorrentino first handed the script to producer Lorenzo Mieli, who worked on “The New Pope” and “The Young Pope,” last summer as the pandemic’s first wave locked down Italy and much of the world. “He only said that there was a movie he always wanted to write and this summer he was going to try to make it happen,” Mieli said. “After a couple of weeks, he gave me the script, and I was shocked it was so personal. It felt like a turning point for him.” 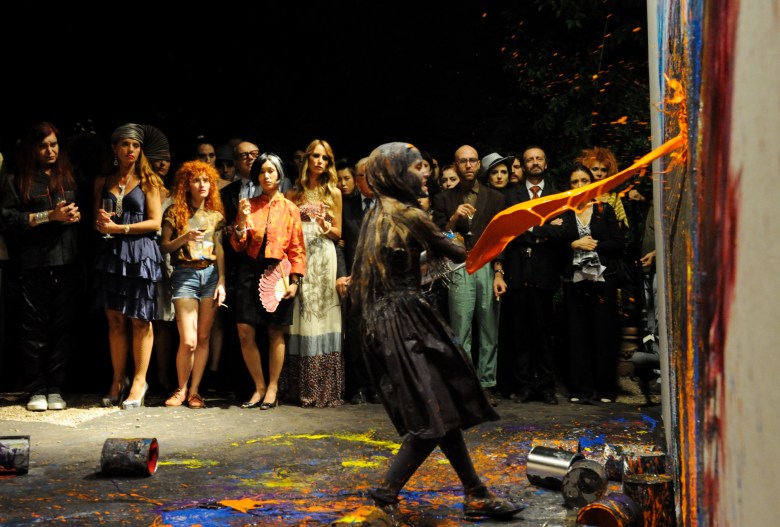 While “The Great Beauty” expanded Sorrentino’s international reputation, it also turned him into a divisive figure in his native country, where some audiences have complained that his Felliniesque indulgences and fixation on historical settings beyond his origins register as naive or reductive. “The Hand of God” is an explicit response to that backlash. “Maybe, for the first time in my career, I can avoid the criticism that I have often faced, that I don’t know what I’m talking about,” he said. “In this case, I know it all too well.”

Sorrentino’s key to unlocking his story with “The Hand of God” came from the casting of Scotti, a virtual newcomer Sorrentino cast after auditioning over 100 actors for the part. Though the actor radiates the sensitivity of Timothée Chalamet circa “Call Me By Your Name,” Sorrentino was keen on capturing a would-be star over an existing one. “I didn’t want someone to play me who looked like a character from another movie,” Sorrentino said in English, and laughed, which was something of a surprise. The frazzle-haired 51-year-old tends to speak through a translator with a sullen, almost protracted tone, and as he chain-smoked in front of his computer, with a poster for “8 1/2” almost too perfectly positioned over his left shoulder, he tried to maintain that guise.

“I know I might seem annoyed,” he said. “But it’s not that. I tend to be very restrained because I’m scared now, all the time, that I’ll be moved while talking about these facts from my life.” That extended to the set, where Sorrentino worked overtime to maintain his composure during the most dramatic moments of the shoot, including the re-staging of his parents’ death. Mieli said everyone could feel the intensity of the moment. “It was a very strange and unique experience,” he said. “There was a kind of a sacred quality to what we were doing it. You could feel it from day one.”

But Sorrentino embraced the opportunity to dig deep for the production, which lasted eight weeks last fall, and marked the first opportunity for much of the crew to gather after the lockdown. “After months of being completely locked in our homes, we were finally able to be outside and it was very joyful for us to shoot those scenes at the seaside,” he said. “I remember just standing there in the seawater. It was such a liberating feeling on my part. We were outside without our masks. It didn’t last very long. But it was an unforgettable experience.”

If Sorrentino has one regret over “The Hand of God,” it’s that the source of his inspiration, Maradona himself, didn’t stick around to appreciate it. For years, Sorrentino has credited Maradona as his hero, and not only because the filmmaker’s desire to see Maradona play all those years ago may have saved Sorrentino’s life. When Sorrentino won the Best International Film Oscar for “The Great Beauty” in 2012, Maradona was one of the inspirations he thanked. Yet when news of “The Hand of God” circulated last summer, Maradona’s agent claimed to the press that the retired player was seeking legal action over the title, a reference to the fateful goal that Maradona achieved in June 1986 in an Argentina v England game. (The goal was allowed because referees didn’t see Maradona use his hand, and video replays weren’t being used yet.)

Maradona died one month after the shoot on “The Hand of God,” before Sorrentino had a chance to reach the footballer and talk things through. “I’m very sorry about that,” Sorrentino said. “One of the reasons I made the film was to be able to show him, finally, the meaning he had for me in my life — and for so many people in Naples.” Sorrentino said he suspected the legal threats came from Maradona’s “inner circle wanting to scare us somehow, maybe in order to get some economic return. I can’t imagine he was really concerned about the film.”

The other real-life character who surfaces in “The Hand of God” still plays an active role in Sorrentino’s life. As Fabietto wanders Rome as he awakens to his creative instincts, he encounters the filmmaker Antonio Capuano (Ciro Capano), a passionate, combustible man who forces Fabietto to look for an underlying purpose and aesthetic in his filmmaking ambitions. “He was one of the few people who believed in me when I was not believing in myself,” said Sorrentino, who ultimately wrote the script for Capuano’s 1998 effort “The Dust of Naples” shortly before making his own foray into directing features. “Before I met him, I thought filmmaking was too big for me. I wasn’t sure I deserved to become a filmmaker myself. He taught me the need to rely on my instincts.” 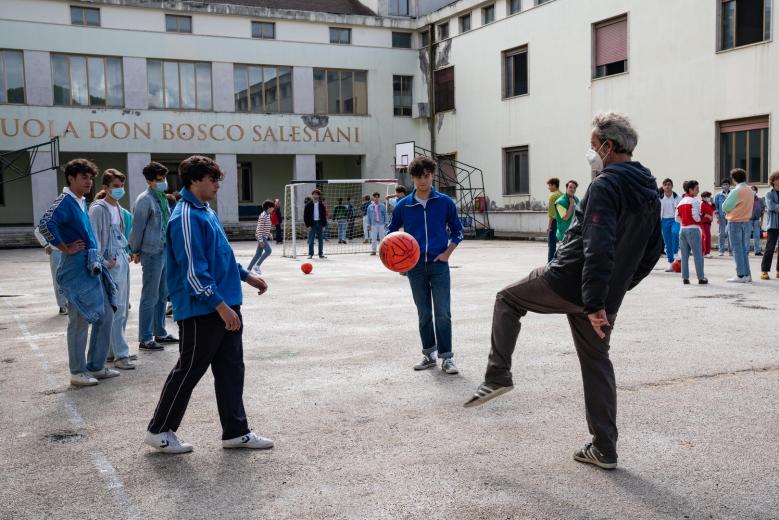 Sorrentino on the set of “The Hand of God”

While “The Hand of God” helps clarify Sorrentino’s evolution as a filmmaker, it also explains how he’s parsing the next phase of his career. News reports suggest a loaded slate that will take him well beyond his Italian comfort zone. At the moment, he’s attached to direct two projects with Jennifer Lawrence: “Mob Girl,” the story of an FBI informant, and an untitled biopic of super-agent Sue Mengers. There are also rumors of another “Pope” season on the horizon at HBO. Sorrentino isn’t ready to discuss any of that, though. “For the time being,” he said, “my only true project is ‘The Hand of God.’ We’ll see about the rest.”

Whatever he does next, Sorrentino said that “The Hand of God” illustrates why he isn’t taking any new opportunities for granted. “Just because you had a tough life and felt powerless doesn’t automatically make you a good filmmaker,” he said. “But if you are able to take all the difficulties that you have experienced in life — the harsh feelings that have stayed with you — and have the intelligence to turn all of that into a unique poetic style, at that point — well, maybe you can be a good filmmaker.”

“The Hand of God” premieres at the 2021 Venice Film Festival. Netflix will release it theatrically on November 15 and on the platform on December 15.