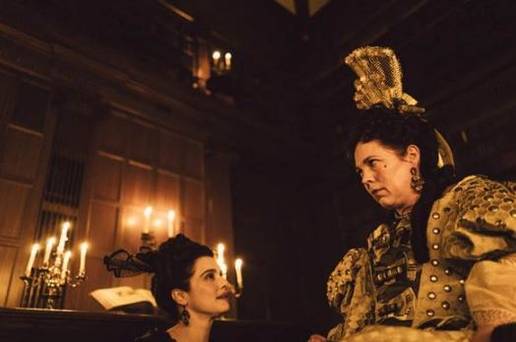 The nominations for the 2019 Golden Globes have been revealed and Irish produced film The Favourite is in the running for five awards.

The Favourite is fresh from landing a record-breaking 10 gongs (out of 13 nominations) at the British Independent Film Awards.  Directed by Yorgos Lanthimos, it charts the the later years of Queen Anne, and the internal politics of her court, and stars Olivia Colman, Rachel Weisz, and Emma Stone. Element Pictures, headed up by Ed Guiney, produced.

The film was shot by Irish cinematographer Robbie Ryan and was partly post produced in Dublin. It will be released in Ireland in January 2019 through Fox Searchlight.

A Star is Born earned Bradley Cooper a Best Director and Best Actor nomination and Lady Gaga is in the running for Best Actress. It is also up for Best Motion Picture – Drama.  The song Shallow is also nominated for Best Original Song earning the film five nominations in total.

Our own Caitriona Balfe is also in the running for Best Performance by an Actress in a TV Series – Drama for Outlander.  She’s up against Elizabeth Moss for The Handmaid’s Tale, Sandra Oh for Killing Eve, Julia Roberts for Homecoming and Kerri Russell for The Americans.

It’s the 76th year of the event which sees nominees from the worlds of TV and film voted on by the journalists of the Hollywood Foreign Press Association.

The ‘major announcement’ that was being teased is the news that there will be a new award in the TV category which will be the equivalent of the Cecile B Demille award for film.

The Assassination of Gianni Versace

Best Actor in a Limited Series

Sacha Baron Cohen, Who Is America?

If Beale Street Could Talk

Spider-Man: Into the Spider-Verse

Best Actress in a Limited Series

Best Actor in a Film – Comedy or Musical

Robert Redford, The Old Man and the Gun

Bradley Cooper, A Star Is Born

Best Actor in a Supporting Role

Richard E Grant, Can You Ever Forgive Me?

Lady Gaga, A Star Is Born

Melissa McCarthy, Can You Ever Forgive Me?

Bradley Cooper, A Star Is Born

“All the Stars”, Black Panther

“Girl in the Movies”, DUMPLIN’

“Shallow”, A Star Is Born

Best Actress in a Supporting Role

If Beale Streat Could Talk

A Star Is Born

The 16 Best Film Performances by Actresses in 2018
World News