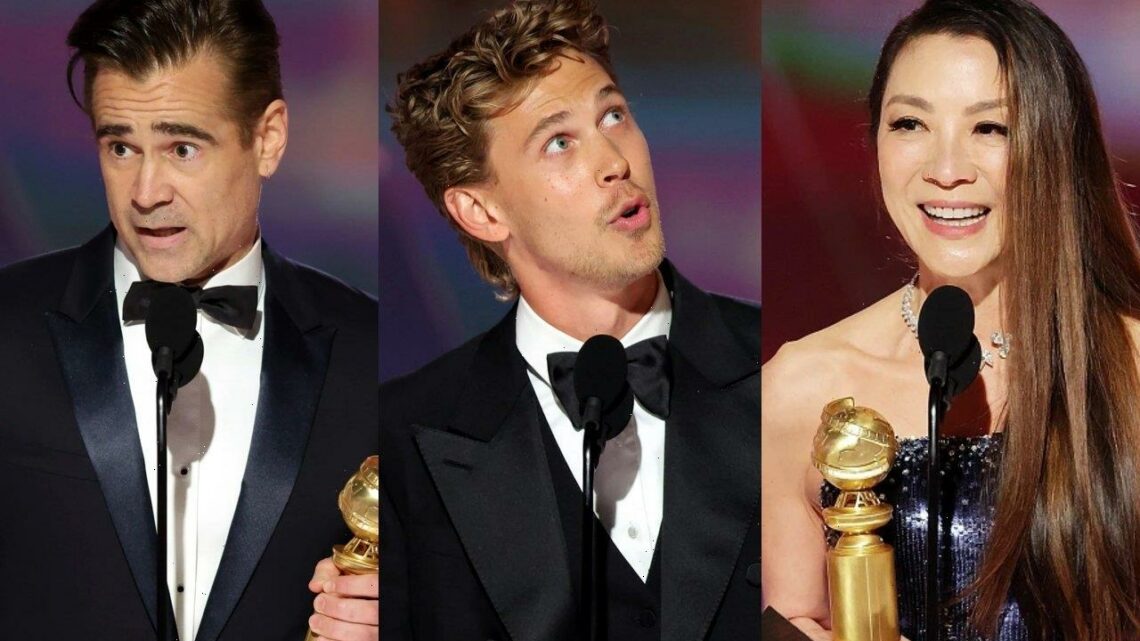 The ‘Everything Everywhere All at Once’ actress, the ‘Elvis’ star and the ‘Banshees of Inisherin’ actor, who all win movie acting awards, respond wittily as the ‘wrap it up’ piano plays during their acceptance speeches.

AceShowbiz –Michelle Yeoh has just won her first Golden Globe Award at the 80th annual ceremony, which is currently airing live on NBC, and she wasn’t having it when the producers wanted to cut her speech. The actress had a sassy clap-back when she was being played off onstage.

The Malaysian actress tried to soak in the moment as she was named Best Actress in a Motion Picture – Musical or Comedy for her role in “Everything Everywhere All at Once“. She remembered the time when she first came to Hollywood, before thanking everyone she’s worked with in Hollywood, including Steven Spielberg and Danny Boyle.

The 60-year-old has just started talking about “Everything Everywhere All at Once” when the “wrap it up” piano played. “Shut up, please,” she shouted, prompting laughter from the audience. “I can beat you up, I’m serious,” she added as she continued thanking those who worked with her in the comedy film.

Austin Butler got the same treatment when he accepted the award for Best Actor in a Motion Picture – Drama for playing Elvis Presley in “Elvis“. “You can at least play ‘Suspicious Minds’ or something,” he wittily responded before continuing his speech.

Another victim of the “wrap it up” piano was Colin Farrell, who won Best Actor in a Motion Picture – Musical or Comedy for his role in “The Banshees of Inisherin“. He took the moment to praise Ana de Armas‘ performance in “Blonde” before he gave a shout-out to his co-stars. When the piano played him off, he said, “You can forget that piano,” as he proceeded to finish his speech.

Also joining the winner list was Guillermo del Toro, who took the Golden Globe for best animated film for “Pinocchio”. The director opened his remarks by noting, “Some of us are drunk, what could be better?” He then stressed that animation is not just for children, saying, “It’s a movie not for kids, but kids can see with you if you explain it to them.”

“Everything Everywhere All at Once” has so far collected 2 awards after Ke Huy Quan took home the first award presented at the show, best supporting actor in a motion picture, while “Black Panther: Wakanda Forever“, “Babylon” and “RRR” have bagged one trophy each.

I’m a size 16 and tried Kim Kardashian's Skims swim – it gave 'mama belly deliciousness,' I felt like a goddess | The Sun