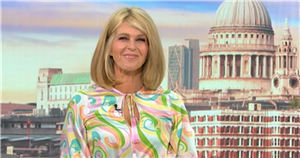 Good Morning Britain host Kate Garraway has opted for a sensational outfit on the ITV programme this morning as she stunned in the bright ensemble, but Richard Arnold didn't quite think so.

Prior to Kate stepping foot onto the show, Richard was chatting away to Pip Tomson who was on the show from 6am to 6:30am as they prepared to welcome Kate and her co-host Ben Shephard onto the set.

After giving an update on the latest entertainment news, Richard said: "I'll hand it over to Kate now who looks like a bag of Chewits."

In the background, someone could be heard laughing loudly, before Pip took it back and said: "He is so rude!

"Let's hand it over now to Alex, who is much less rude."

Alex briefly appeared on the show before Kate joined the screen at 6:30, looking incredibly content with her outfit as she flashed a smile while she appeared back on screen.

Kate, who was donning an incredibly colourful top with green, pink and blue swirls among many other colours, certainly looked bright and bubbly.

She paired it with some purple trousers as she looked incredibly glamorous with a stunning makeup look and her locks falling neatly by her shoulders.

Kate finished the look with a swipe of lipgloss as she dropped jaws on the TV and owned the brutal comments from Richard.

Welcoming her on the screen, Ben said: "Well, as Richard said, you look like a packet of Chewits!"

Kate chirped: "I look like a packet of Chewits. I desperately try to bring joy even if just with my outfits."

Agreeing with her, the co-host told her that her bright and wonderful outfits do bring joy.

Kate reaffirmed to the camera that her trousers are purple, adding: "That's why the Chewits comment were made."

The host then turned to Ben and said: "You're not saying something that will make me upset so at least we have something to smile about," which Kate added was few and far between given the current climate.

On the show, the hosts were discussing the shortages of multiple products including petrol and pumpkins – so Kate was happy to bring some kind of positivity with her stunning outfit.

GMB returns to ITV on Monday at 6am.

Pregnant Kylie Jenner Reasons Why She Is in No Rush to Pick Name for Baby No. 2
World News