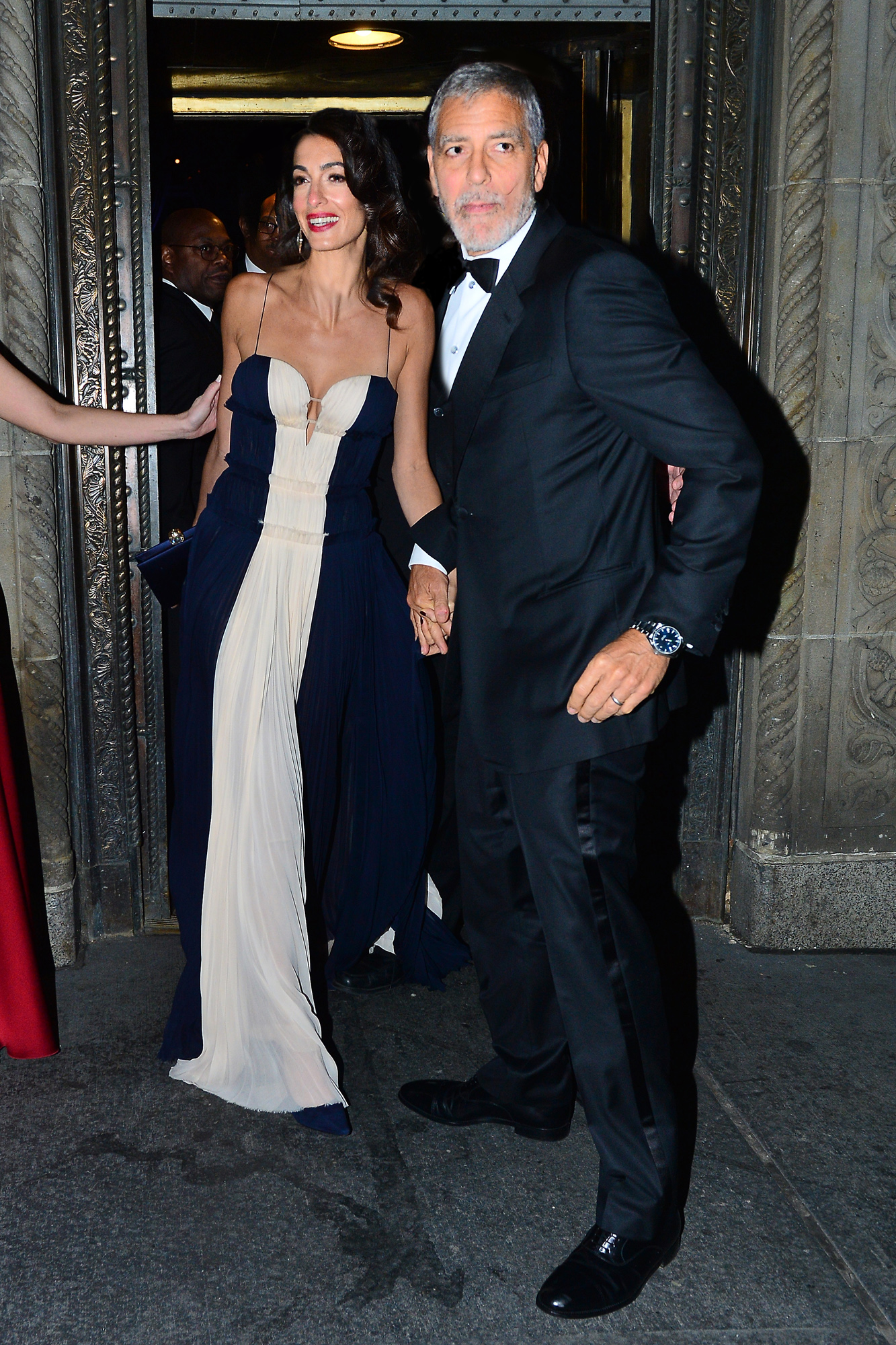 It’s date and family night for George and Amal Clooney!

Amal, 40, who wore a navy and white chiffon gown with a sweetheart neckline, was honored at the event with the 2018 UNCA Global Citizen of the Year Award.

As for George, 57, he kept it traditional with a classic tuxedo for the ceremony. His parents joined him in donning formal attire — his father, 84, wearing a black tuxedo, and his mother, 79, opting for a long-sleeved sparkly gown.

During her acceptance speech, Amal paid tribute to Nadia Murad, the co-winner of this year’s Nobel Prize, and thanked her father-in-law — who is also a journalist — for raising her husband well, according to a guest at the event.

She also explained that the couple intends on “monitoring trials of journalists” and helping them financially, as well as supporting the endless accounts of journalists ranging from the Maldives to Egypt.

“I am here tonight to honor you, the journalists being recognized for your groundbreaking reporting this year,” Amal said in a clip recorded by a guest.

At the prestigious awards ceremony, which honored the best print, broadcast and electronic media coverage of the United Nations, U.N. agencies and field operations, over $60,000 were distributed among the prize winners, which was available to journalists around the world, according to the UNCA website.

As the year comes to a close, the couple has been honored at several awards ceremonies. Most recently, Amal was honored at Variety’s annual Power of Women luncheon, where George introduced himself to the star-studded crowd by using his wife’s moniker.

“Hi, I’m George and I’m Amal Clooney’s husband,” he joked at the event in October, as he supported his wife. Making everyone crack up, the Oscar winner added, “I can read this room.”

Amal, however, wasn’t on hand, as the human rights lawyer was giving a keynote speech in Philadelphia during the 2018 Pennsylvania Conference for Women.

Months earlier, Amal was happy to get on stage and share how she felt about her husband at the AFI event honoring George with a Life Achievement Award in Los Angeles.

The human rights lawyer also touched on his incredible generosity, and how she thought she’d be a single forever before they met and began dating, before getting personal about what an adoring and devoted dad he is to their twins, Ella and Alexander, 1.

“There are a few things you might not know about George. First, he is a gentleman. He is a gentleman in every sense of the word and in a way that seems so rare these day and perhaps even outdated,” she said. “Everyone who knows him, even those who oppose him politically or have quarreled with him professionally will tell you he has not forgotten his Kentucky manners.”

“Every set I visit, I am told by the crew that George sticks up for the most vulnerable,” Amal continued. “His security team told me that when shooting in Montreal George refused to wear a warm winter jacket unless every actor and extra got the same one even though it was 40 degrees below zero.”

“My love, what I have found with you is the great love that I always hoped existed and seeing you with our children Ella and Alexander is the greatest joy in my life,” she said. “You fill our home with laughter and happiness and that is even before the children have worked out that dada is actually Batman, a talking fox and friends with Mary Poppins.”

“I am so proud of you my love,” she finished. “Congratulations on this great honor you are receiving tonight. I am proud of you but I also know that when our children find out not only what you have done but who you are they will be so proud of you too.”

Yemen peace talks set to start on Thursday in Sweden