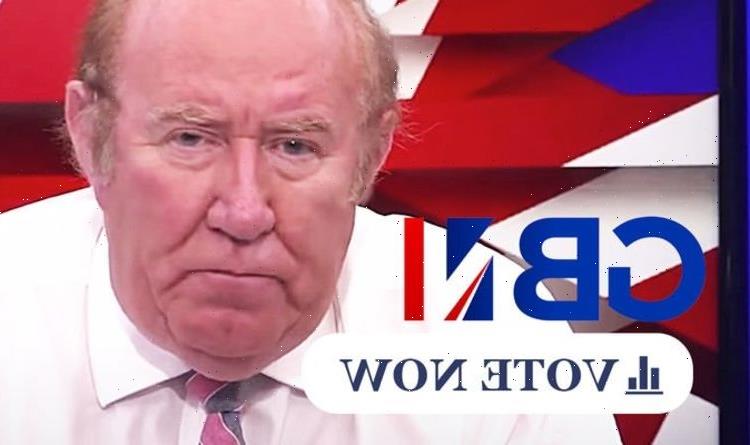 Andrew Neil was set to return to GB News later this month but it has now been reported he’s contemplating stepping back from his prime-time political show. The chairman of GB News spent two weeks presenting his new gig before taking a two-month break when the channel’s launch was plagued by poor ratings and a lack of audience engagement. Before his departure, Neil urged viewers to stick with GB News despite the rocky start they had received.

According to the Telegraph, plans for the flagship presenter to return to the news network has been cancelled, as insiders now expect him to resign without returning at all.

The Times had initially reported Neil will “not return on Monday as expected”.

The broadcaster and GB News bosses have reportedly failed to set aside their differences after relations between Mr Neil and chief executive Angelos Frangopoulos broke down.

The supposed difference came from where the company’s direction was going, with the two having different views and aspirations for the show.

DO YOU THINK GB NEWS WILL SURVIVE WITHOUT ANDREW NEIL? VOTE HERE

Initially, GB News compared the viewing numbers to rival channels as the network presented itself as a centre-right alternative to the BBC.

However, since the departure of Neil, the audience levels have dropped, leaving Mr Frangopoulos with plans to remodel the news programme.

The former BBC interviewer took a break from GB News just two weeks after its launch in June.

He explained the reason for his absence was to “recharge my batteries” and said he would be back before the end of summer.

In his absence, Neil’s show was handed to former Sky anchor Colin Brazier.

However, he has since been replaced by Alastair Stewart due to Colin having his own holiday.

It has been reported that Neil had grown weary over technical issues that hadn’t been resolved, leaving the presenter “close to tears” after one show.

Speaking on the tough start that GB News had faced, Neil commented: “We’re a start-up, they’re always a bit rocky these start-ups.

“But we are up and running, and as you can see, we get better every day, and there is clearly an appetite for what we’re doing.

“And in two short weeks, we’ve already built a loyal audience which has beaten all out expectations, it’s often bigger than the other news channels, and it’s growing,” he said.

In Neil’s absence, former UKIP leader Nigel Farage brought in record figures for the platform with his first show beating BBC News and Sky with 107,000 viewers.

New figures have shown GB News’ reach is much higher on social media platforms such as TikTok and YouTube, while the GB News app has almost reached 300,000 downloads.

Upon hearing the news of Neil’s likely departure from the show, fans took to social media to express their dismay.

One wrote: “@GBNEWS If @afneil leaves your station, it may well be the beginning of the end, which would be a great shame. Tell the top guy to wake up, you need Andrew Neil, we all do.”

Another added: “GB news is going from strength to strength, would be a shame if Andrew Neil left, but there are some great young broadcasters and commentators being showcased. Keep it up.”

“I love GB News, but I think every effort should be made to get Andrew Neil back on board, a petition maybe?” a third wrote.

“@afneil was a big part of my reason for switching to @GBNEWS, without Andrew, I will have to reconsider my loyalties and options,” a fourth user commented.

The Telegraph reported that Mr Neil was not available for comment at this time.

GB News begins with the Great British Breakfast daily at 6am.