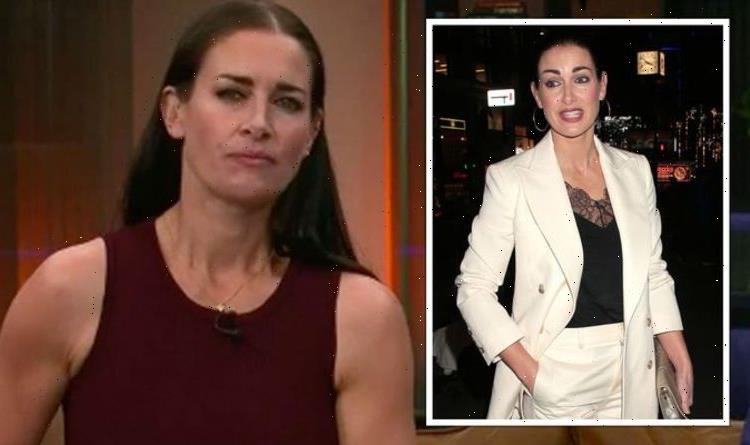 GB News: Kirsty Gallacher admits ‘I’ve been told off so many times’ over Covid rules

Kirsty Gallacher discusses being 'told off' over COVID-19 rules

The main topic of conversation on GB News was Freedom Day with clubs and bars opening up at midnight on July 19 to allow revellers back inside for the first time in 18 months. Kirsty Gallacher admitted she was “nervous” about the relaxing of restrictions but had been “told off” for failing to follow the rules. However, her co-host Darren McCaffrey explained many viewers will be thinking Freedom Day still hasn’t arrived.

“One thing I won’t miss with regards to the opening up is when you’re told to walk a certain way,” Kirsty began.

“I’ve been told off so many times. ‘Can you go that way please?’ and ‘Don’t go across there.’

“You know, even yesterday I was somewhere.”

It came after the pair admitted they have mixed feelings over Freedom Day and the relaxing of restrictions.

“Do you feel more cautious about what you’re doing?” Kirsty asked Darren. “Because personally, I’m feeling more nervous today because we know how quickly this spreads.

“It’s all very well and great that we’ve had this Freedom Day, it had to come at some point, but it’s an experiment isn’t it? Cases are going up.”

As video footage of clubs reopening and packed out bars were shown, Darren commented: “It is difficult to look at this and you know, these young people who have had a very torrid time over the past 18 months.

“My big thing is frankly, a lot of these – I’m not saying any of these particular individuals you see now – but a lot of young people haven’t exactly been adhering to the rules all the time.

“This is inside, you know,” Kirsty pointed out.

Darren continued: “This is true but we also know quite a lot of people have caught the virus over the past 18 months and will have some form of immunity.

“It is difficult, these things are a balancing act. As we say there is a form of personal responsibility. We are going to have to, at some stage, open up.

“We always knew that was going to lead to cases increasing. But all I get the fact there’s a lot of vulnerable people looking at these nightclub images who also have been isolating and taking precaution over the last 18 months who look at this and think this is not Freedom Day for me.”

“I think there will be a lot of people will now be more cautious,” Kirsty replied.

Many of those watching GB News were also divided and took to Twitter to share their thoughts.

“I will continue to wear my mask in supermarkets and on public transport, as you can carry this virus with no symptoms I’ll wear it to protect myself and loved ones, and yes even strangers,” one viewer commented.

Another shared: “Kirsty is right. It’s too soon to open up. All that miserableness of lockdowns could well come back because the government jumped the gun.”

A third continued: “Nervous, but hasn’t stopped you sitting in a studio with a mixture of various people since the channel started. I’m liking GBNEWS but let’s not be daft.”

Great British Breakfast airs daily on GB News from 6am.