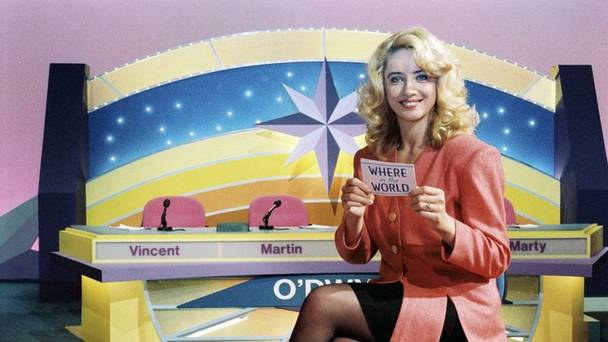 The news that Blockbusters is set for (another) reboot courtesy of Comedy Central has been met with mixed reaction. Those of us who spent our childhoods in the wilds of the 80s and 90s are very possessive of our beloved game shows, and the memories and nostalgia entangled within. Mess with them at your peril!

If you were lucky enough to be an Irish household that had the UK channels as well as RTE you’ll probably have as much fondness for Blockbusters and its ilk as RTE’s The Den and Where in the World.  The original series ran on ITV from 1983 for a whopping ten years, with the brilliant Bob Holness at the helm.  It pitted one student against a pair, with each side battling to make their way down and across a board of interlocking hexagons, with each shape housing a question based on a letter.  It was like Connect 4 with questions.  It was fast, it was furious, it was good old-fashioned family fun.

While there have been several incarnations since that original run wrapped in 1993, with the likes of Michael Aspel and Simon Mayo daring to attempt to channel the legendary Bob, we are willing to give this latest reboot the benefit of the doubt as Comedy Central are reportedly going to remain true to the original – including the theme tune – and if anyone can give it his own stamp, it’s our own Dara O Briain.

In the name of nostalgia, here’s a look back at some of the other 80s and 90s quiz and game shows we remember most fondly.  Some have been rebooted, others (probably fortunately) remain beautiful TV relics of yesteryear…

Where in the World

Oh those heady Sunday nights of Glenroe and Where in the World?, the last hurrah before the school week started.  Presented by the wonderful Marty Whelan for the first two years, and then the equally wonderful and stylish Theresa Lowe, the geography-based show ran for nine years in total from 1987.

Following a similar format to UK series A Question of Sport, the show was presented by George Hamilton and featured Jimmy Magee and Mary Hogan and had an impressive run from 1987 to 1998.

Ray D’Arcy is now one of RTE’s top earners with his own Saturday night chat show and weekday radio show, but back in the 90s he was the King of Kids’ TV as the presenter of The Den (from 1990 to 1998) and also Blackboard Jungle (1991-1997).  Everyone had a second cousin twice removed who had appeared on it and they’re still on a pedestal in your mind.

It ran for a whopping 20 years from 1992 to 2002, with Aonghus McAnally presenting for the first two series before he was replaced by Eurovision winner Linda Martin.  The show featured two teams with a captain playing piano joined by to celebrities or singers.  Written down the rules sound pretty complex, but in reality it was a simple enough format, one which was invented at a Christmas party for Scratch Saturday, according to John Keogh who was team captain on the first three series.  The format sold to more than 20 countries worldwide.

Beyond the confines of Ireland, British TV was crammed with game show gold, and The Krypton Factor was simply phenomenal.  Gordon Burns presented from 1977 to 1995.  Contestants from across the UK and Ireland had to compete in a series of mental and physical challenges.  From the cutting edge graphics (laughable now, of course) to the complexity of the challenges (landing – or crashing – a plane in a simulator, for example), it was catnip for kids, even though adults took part.  Hands up who built a DIY Krypton Factor assault course out the back garden?

Our beloved export, the late Terry Wogan, hosted the show initially from 1979 to 1983.  However, most 80s kids will remember Les Dawson who took the helm and made it his own until 1990 with regular guests including Kenny Everett, Paul Daniels and Lorraine Chase.  Of course, much of the adult humour went right over our heads and it would probably air at 11pm these days, but back in the dark ages it was perfectly acceptable family viewing.  It was rebooted in the late 90s with Lily Savage presenting.

It has had several runs, the first inhabiting as lot on the BBC from the early 70s to 1982, presented by Bruce Forsyth and then Larry Grayson.  It returned in 1990 with Brucie, but he departed again in 1995 and Jim Davidson took over.  Most kids will remember the conveyor belt of dreams (not its official title) which was the highlight of the show.  Contestants attempted to remember as many of the prizes featured on said conveyor belt as possible within 60 seconds.  A cuddly toy always featured and the joke never got old.  They were simpler times.  A group of glamorous ladies with big hair and shoulder pads helped with hosting duties, mostly shuffling contestants around the studio, and holding prizes aloft with a smile.  No, that 90s run has not aged well…

Much like Blockbusters, this BBC One weekday game show kept many a child enraptured and engaged with geography (what was the obsession with geography?).  The original run spanned 1987 to 1996 with Irish presenter Henry Kelly – who had abandoned a career in journalism for a career in broadcasting – manning the fort.  Contestants from around Europe competed to answer questions in four rounds – Elimination, Beat the Buzzer, Four in a Row (the most heart-pounding of all), and Head to Head.  It was nail-biting stuff.  “What am I?”

The pressure!  William G Stewart presented this quick fire general knowledge quiz show through its original run from 1988 to 2003 on Channel 4.  Much like The Weakest Link, which came later, it featured contestants standing in a semi circle with three lives, battling to survive to the final where three would compete to win.  So simple, so stressful.

With its irresistible mix of letters and numbers, it’s still going strong after 36 years.  It’s one of the longest running game shows in the world.  Now it’s presented by Nick Hewer with Rachel Riley fulfilling the maths duties and Susie Dent helming Dictionary Corner, but the late Richard Whitely presented the show for more than 20 years before he died suddenly in 2005.   Carol Vorderman, the original maths whiz, departed three years later but it’s those Whitely/Vorderman years most of us remember most fondly.

Roy Walker presented, with his dulcet Northern Irish tones, from 1986 until 1999, with two contestants attempting to figure out the phrase depicted in an animated image/video on a giant screen.  Twas very impressive stuff back in the 80s and early 90s and one the entire family can enjoy.  The most recent run, which channels the original, down to the inclusion of animated character Mr Chips, is presented by Stephen Mulhern who is equally as brilliant as Roy.