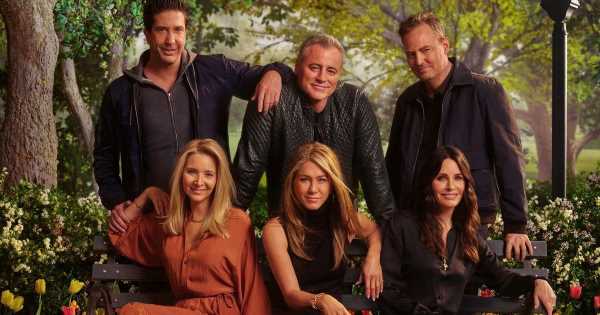 The moment fans have been waiting for is finally here – the Friends Reunion episode has been released.

The original show premiered in 1994 and ended in 2004 after 10 seasons, and now we're finally going to catch up with the much-loved cast.

The six main characters ended up making millions throughout the seasons – and have since received millions more in royalty.

It's been 17 years since the last episode aired, and afterwards they went on to add even more wealth to their net worths.

Of all the Friends stars' net worths, Jennifer Aniston has the most impressive – and it's not even close to the next person.

According to the wealth website Celebrity Net Worth, Jennifer has a net worth of £212million – easily making her the richest of the cast.

Jennifer, who played Rachel Green in Friends, went on to have an incredibly successful career, starring in many Hollywood films including Along Came Polly and Bruce Almighty.

More recently Jen has starred as Alex Levy in Apple TV+'s The Morning Show, alongside Steve Carrell and Reese Witherspoon.

Courtney Cox also boasts an impressive net worth of £106million, according to the same website.

She also reportedly earned £194,000 per episode of Cougar Town, which ran for six series.

Despite battling illness and addiction, Matthew Perry has continued to work since Friends ended.

He landed roles in films including The Ron Clark Story, and 17 Again alongside Zac Efron.

Matthew, who played the loveable Chandler Bing in Friends, now boasts a net worth of £84million.

Next up is David Schwimmer, who also went on to have a successful career after Friends ended.

His net worth is reportedly an estimated £70million, which he has amassed through his film and stage work.

You may recognise his voice as Melman the Giraffe in animation film Madagascar, and he also starred in films such as Big Nothing and Nothing but the Truth.

Lisa Kudrow has had many roles since the end of Friends, which explains why she had a net worth of £63million.

Some of her most notable credits include Dr Dolitte 2, The Girl on the Train and Bandslam.

Last but not least, Matt LeBlanc, who also went on to star in a short-lived Friends spin-off series called Joey.

He reportedly now has a net worth of around £56million.

UK fans might also recognise Matt from the Top Gear reboot, which lasted from 2016 until 2019.

How much were they paid per episode and how much for the reunion?

For the first series, which aired in 1994, the cast of Friends earned £15,925 per episode, according to MarketPlace.

But by the second season there were some discrepancies between the actors when it came to pay.

However, they decided to band together by the third season and enter collective negotiations.

It worked, and while they were filming season four the pay reportedly went up to £53,092 per episode.

Friends is one of the most lucrative syndicated shows in the world, with 236 episodes ready for TV repeats.

According to USA Today, each main actor in Friends makes around £13-14million a year from royalties.

Each star is believed to be getting paid between £1.7million and £2.1million for the one-hour long reunion special, according to The Hollywood Reporter.

Documentary looks back on the murder of Sarah Wellgreen

Cruella’: The Disney Villain’s Origin Story Could Be the Dark and Evil One Fans Have Been Waiting For
World News