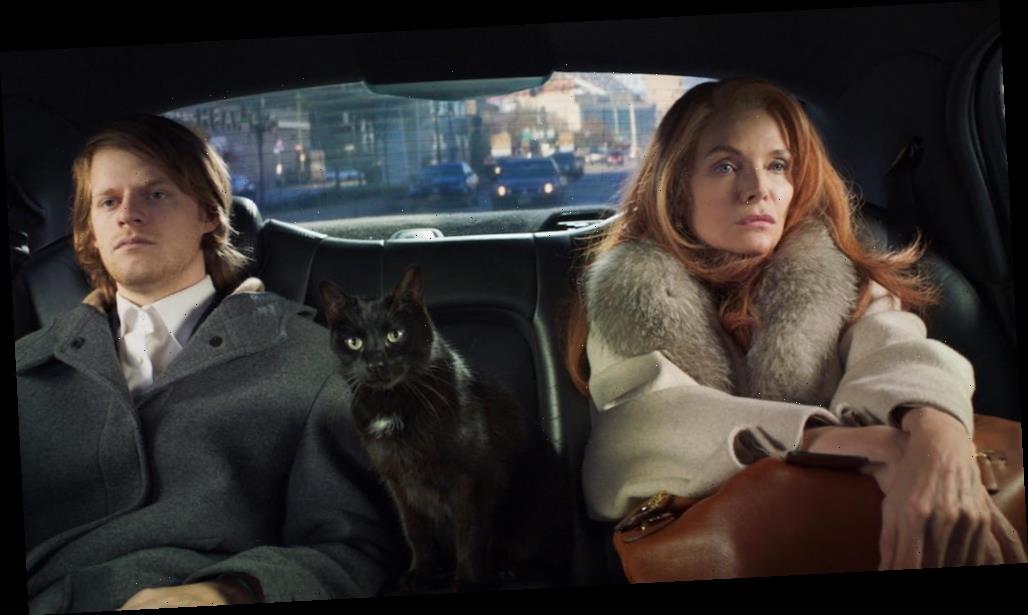 Frances Price has a problem. It’s not that she doesn’t have any friends, or that she’s wasted most of the 12 years since she’s been widowed, or that her adult son Malcolm is as much of a dilettante at 20-something as she is at 65 — all of those things are true, but they don’t seem to bother her very much (besides, Frances’ late and loaded husband appears to have reincarnated as a black cat she calls Small Frank). No, Frances’ problem is that an infamous socialite like her can’t afford to be poor. “My plan was to die before the money ran out,” she announces at the top of a low-key farce about her final adventure, “but I kept and keep on not dying, and here I am.”

Death is always just a few dollars away in the wry and beguiling “French Exit,” a musty tragedy of manners that director Azazel Jacobs and his longtime friend/sometime collaborator Patrick DeWitt have adapted from the latter’s novel of the same name. For Frances — who a serrated Michelle Pfeiffer plays like an intoxicating cross between Selena Kyle and Luann de Lesseps — the dwindling stacks of cash in her bedroom closet are the last grains of sand in an hourglass turned upside down more than a decade ago, when Big Frank died and she pulled Malcolm (Lucas Hedges) out of boarding school because she needed someone new to love her. Imminently penniless, Frances decides that she and her doting son and the family cat who may or may not house the spirit of her long-deceased husband will make a break for it: They’ll convert the money they have left to euros, sail on a tacky cruise ship across the Atlantic, and hole up in a borrowed Paris apartment until spent dry.

So begins a sleepy, gray Sunday afternoon of a movie that feels like a hyper-literate Aki Kaurismäki comedy one minute, and the silliest thing that Whit Stillman never made the next. Its best stretches invariably split the difference, such as the cold-as-dry-ice bit where Frances and Malcolm discover that cruise ship morgues are a lot busier than you’d imagine. The rest of it is watched with a blank stare. The unfussy approach that Jacobs honed with the likes of “Terri” and “The Lovers” is a peculiar fit for this material: On the one hand, Jacobs’ refusal to heighten the film to meet its characters at their level tends to suffocate the well-postured screwball energy percolating just below the surface, and keeps “French Exit” from becoming a more animated farce. On the other, it creates a world almost as blithely indifferent to Frances and Malcolm as they are to it in return.

These people are out of step with reality, but just by a toe-length or two, and if this eccentric family portrait often seems poised to stiffen into a less symmetrical relative of “The Royal Tenenbaums,” even the more explicitly surreal moments in its second half keep one foot on the ground at all times. The result is an anodyne if increasingly tender little film that would have been lost in its own lineage if not for the strength of its cast.

For a movie about someone trying to make their escape (from New York, from themselves, from this mortal coil), “French Exit” is never in a hurry to get anywhere, but Pfeiffer’s lush and crumbling turn always gives it a sense of direction. Her Frances is like an old bird of paradise who’s spent its entire life in a mahogany cage, and suddenly has to migrate halfway across the world to die in style. She’s an endangered species of Manhattan socialite — one trapped inside an echo chamber that’s small enough to feel like a coffin — and even the untrained eye could identify her kind from a mile away as she swanned up Central Park West.

Frances has never aspired to be anything more than a cliché (“people tell it, not so many live it” she boastfully coos), and there’s a poignant comic perfection to the way that Pfeiffer always listens for how Frances sounds to herself. She laces every line with the nausea of hearing your own voice come through on the other end of an important phone call, and the woozy film around her feels like it has some kind of middle ear problem as a result. “My life has fallen completely to pieces and I’m upset about it,” she declares at one point like an actor who accidentally says the stage direction out loud.

Malcolm is the only person who doesn’t bat an eye at his mom, and Hedges’ subdued but strikingly thoughtful performance is anchored in a place of almost complete acceptance; “French Exit” is always at least a little intriguing when he and Pfeiffer are onscreen together. There may be private moments where Malcolm has his doubts — it’s always weird to find your mom sharpening her steak knives in the middle of the night! — made more touching when the pair become a united front in public. One especially off-kilter scene finds Frances encountering a homeless man in the park one night (she has a curious thing for homeless people, it turns out), and the way that Malcolm stands behind her in a stoic pose of absolute support is such a pure display of a son’s love for his mother that it almost borders on the perverse.

“French Exit” powers its way across the ocean on the friction it creates between the enviable nature of their “I want what they have” relationship, and the nagging sense that Frances needs to let Malcolm out of her shadow. The kid doesn’t even bat an eye when his mom tells him he needs to ditch his new fiancé in Manhattan (Imogen Poots winches the movie together as the jilted Susan, displaying that same gift for straight-faced satire that once saved Peter Bogdanovich’s “She’s Funny that Way” from itself).

Once Frances and Malcolm arrive in Paris, they acquire an eclectic menagerie of new friends as they back into a fable-like story about the pricelessness of the company we keep. Danielle Macdonald has some droll fun as a blunt and horny cruise ship psychic who refuses to sugarcoat the truth of her readings. Valerie Mahaffey is spectacular and hilarious (in Jacobs’ light chuckle of a comic register) as a lonely widow who keeps a dildo in her freezer and is committed to making the best of things no matter what. Meanwhile, the great Isaac de Bankolé is a reliably warm presence that helps unmoor this movie from the real world in a final act that approaches the “love is all you need” ethos of something like “Paddington 2” (a vibe that only grows stronger when Small Frank starts talking in Tracy Letts’ voice during a handful of séances). DeWitt’s insistence that money does more to keep people apart than bring them together is soft enough to fringe the movie like silky window dressing, but the last stretch of “French Exit” still resolves into a rather unambiguous fantasy about the kinds of families people might be able to make for themselves if the world revolved around a different kind of currency.

That reading might seem like more of a reach in the movie than it does in the book (despite DeWitt writing both), but Jacobs doesn’t give us much else to hold on to. For all of its touching moments — and a series of closing grace notes that shimmer with a mystical flair missing from the rest of the film — this gossamer-thin adaptation is hampered by the same ambivalence that’s haunted Frances for so long. We come to like these people, but we’re not quite invited to join them. It’s never been nicer to watch a movie about people making the best of things, but “French Exit” is too aloof to meaningfully engage with how these characters better themselves on their way out the door.

“French Exit” premiered at the 2020 New York Film Festival. Sony Pictures Classics will release it in theaters on February 12, 2021.