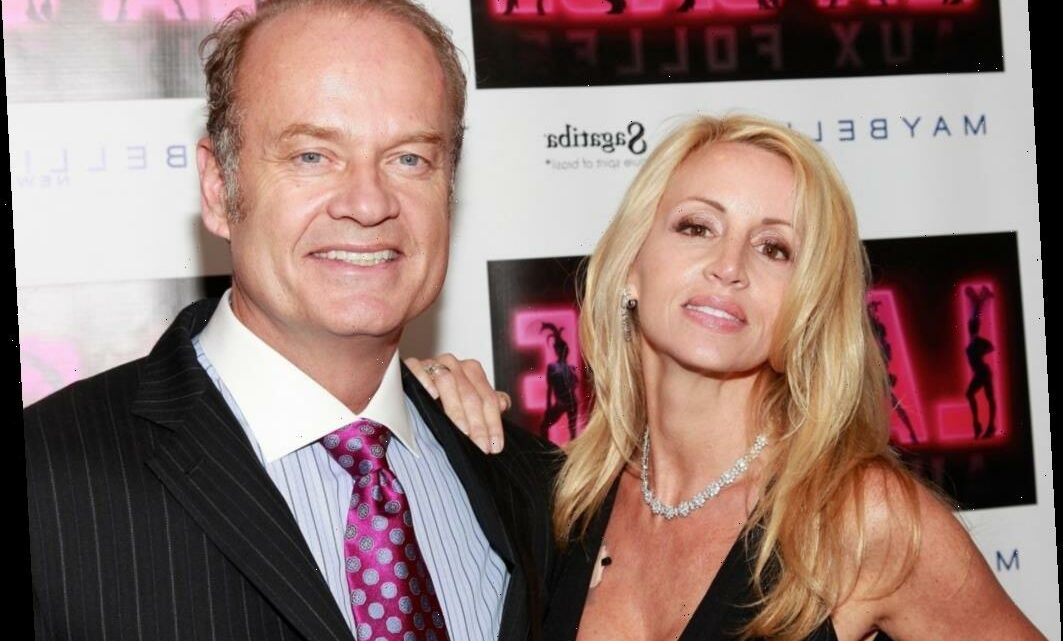 Rumors of a Frasier reboot continue to swirl, keeping fans hopeful of a cast reunion. Playing the role of Dr. Frasier Crane for over two decades, Kelsey Grammer has become synonymous with the Seattle psychiatrist.

Another claim to fame for Kelsey was his previous marriage to former Real Housewives of Beverly Hills star Camille Grammer. Divorcing in 2011 after 14 years of marriage, the couple shared some scenes on the small screen in a festive episode of Frasier.

In 1997, the Frasier episode entitled “Halloween” featured a costume party given by Niles Crane (David Hyde Pierce) with guests dressing up as their favorite literary character. When Roz (Peri Gilpin) confides in Frasier that she may be pregnant, plenty of misunderstandings ensue throughout the night.

At one point in the evening, Frasier begins flirting with a woman dressed up as Eve from the Garden of Eden. Donning a nude-tinted catsuit, the RHOBH alum portrayed the object of Frasier’s attraction.

“I had a lot more hair — I had a ton of hair on me,” Camille recalled, according to Bravo TV. “I needed higher shoes. The cast of Frasier is tall; and Peri Gilpin and Jane Leeves are so tall and they had me in these low shoes. And these girls had spike boots on, and I’m like ‘Darn, costume/wardrobe girls, put me in some heels.’”

While Camille felt like the extreme set of locks wasn’t the best look, she enjoyed her experience on the hit sitcom.

“I look like some furry monster, instead of Eve,” the reality star commented. “But it was fun. It was an excellent episode. I love the cast of that show.”

In a 2019 interview, Kelsey was asked about his marriage to Camille. The Emmy Award-winning actor didn’t hold back on a response.

“Honestly, I don’t really talk about her very much,” he told Graham Bensinger of Camille. “So much of her life is spent talking about me, and I just think it’s sort of pathetic.”

Kelsey and Camille had two children during their marriage – daughter Mason and son Jude. The Frasier star recalled when he knew they needed to go their separate ways.

“A month after I had a heart attack, my mother died — 12 years ago now,” Kelsey remarked. “The day of my mother’s funeral, my third wife basically had an explosion about something. And started to tell me, ‘I’m out of this, I’m out of here.’ Again. ‘I want a divorce.’ … we’d had the same conversation for eight years … I realized at that moment that I was done with her, that I was not gonna end up in this relationship for much longer. And somewhere under a year, I was done.”

Shortly after Kelsey’s interview with Bensinger, Camille took to Twitter to counter his recollection of events.

“This is not true,” the former RHOBH star tweeted. “My parents were with us in the Hamptons when we received the news about his moms passing. We consoled him and flew back to LA to make arrangements for her funeral. It’s unfortunate that he is rewriting history.”

In February 2020, one of Camille’s Twitter followers asked if she and Kelsey have mended fences. Apparently, the two are still not on the best of terms.

“No. Unfortunately not,” Camille responded. “He just wants to hold on to his anger towards me. It’s difficult for our children. They just accept it but it has hurt them over the years.”