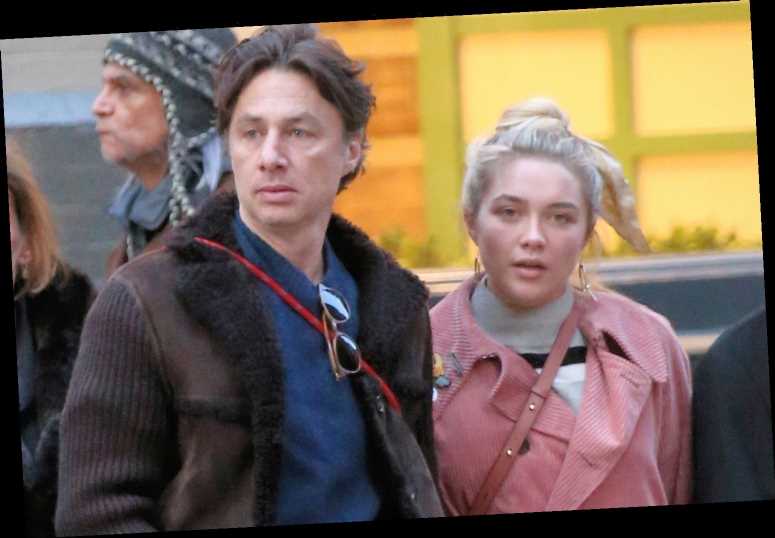 "I think I did feel s— for a while for admitting that," Pugh told Perkins in the podcast. "And then I thought how ridiculous is that? I'm 24 and I can't choose who I love."

Pugh continued, "There's a reason why I'm not with someone my age — it hasn't worked. So, who are you trying to match me up with?"

"I think because of the entertainment industry, obviously those lines get very blurred," the actress added. "People want to have a say on who you go out with, where you go to lunch. I’ve just always found that weird, how people have a say over your private life."

"The fact is, I’m not a reality TV star, I don't let people into my life like that," Pugh said. "Since when has it been okay for people to shout at someone for their relationship? It’s crazy to me."

Braff and Pugh have kept their relationship low-key and out of the public spotlight ever since they seemingly became close friends in 2018.

Pugh told Elle UK for its June issue that she had "the right to hang out and be with and go out with anyone I want to."

"I’ve always found this part of what people do really bizarre. I’m an actor because I like acting and I don’t mind people watching my stuff, but people have no right to educate me on my private life," she said at the time.

"I know that part of being in the spotlight is that people might invade your privacy and have opinions on it, but it’s bizarre that normal folk are allowed to display such hate and opinions on a part of my life that I’m not putting out there," Pugh continued.

"It’s a strange side of fame that you’re allowed to be torn apart by thousands of people even though you didn’t put that piece of you out there. My point to all this is that isn’t it odd that a stranger can totally tear apart someone’s relationship and it’s allowed?"