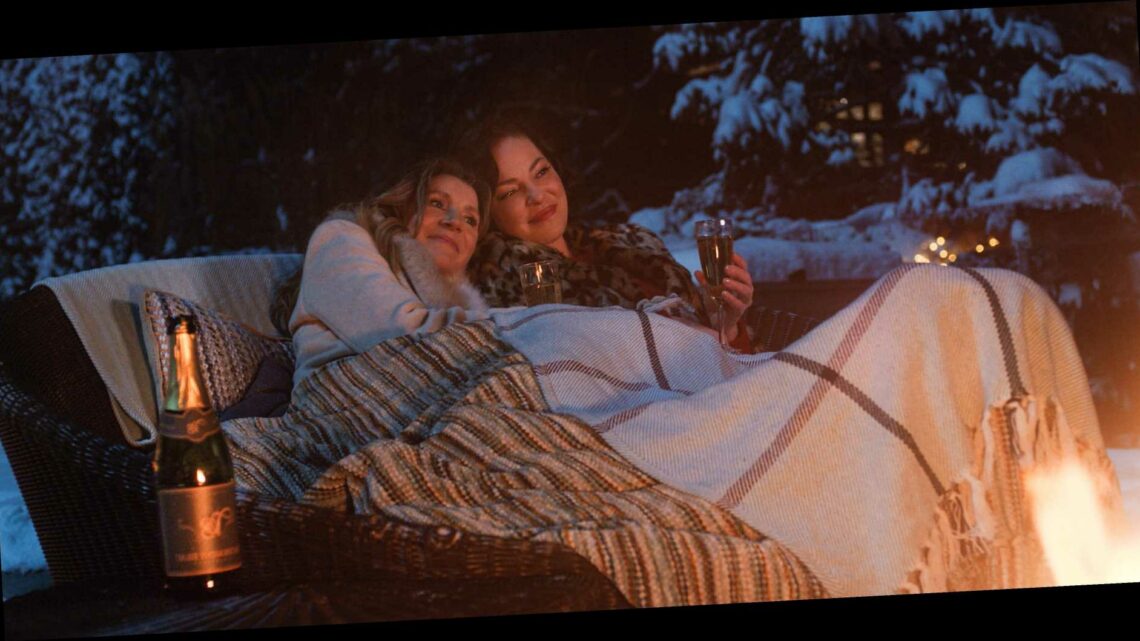 “Firefly Lane” definitely feels like a series set in 2003. By that, I mean if someone told me this show was filmed that year and had been languishing in a vault for the last 18 years, I’d believe it. The series, an adaptation of Kristin Hannah’s novel of the same name, feels akin to series like “Brothers and Sisters” or “Parenthood” in its high-stakes melodrama and tackling of real issues. But with the former ramped up to 11, the latter — looking at sexism and workplace harassment — is overshadowed at best and incredibly maudlin at worst. At least the casting is compelling enough to keep things afloat.

The series takes place over several points in time, differentiated only by the characters’ wig changes. Tallulah “Tully” Hart (Katherine Heigl) and Kate Mularkey (Sarah Chalke) have been best friends since they were teens, when Tully and her hippie mom Cloud (Beau Garrett) moved in across the street on, you guessed it, Firefly Lane. As they grow into adults Tully and Kate make goals to become journalists, though where Tully succeeds Kate falls into a relationship with her boss, Johnny Ryan (Ben Lawson).

There are a lot of things competing for space within the 10 episodes of “Firefly Lane” and what works really works and what doesn’t….well, there’s nothing wrong with a soap opera to drink wine to while sitting in your tub. What creator Maggie Friedman shows is a remarkable flair for is capturing a time period, and the essence of possibility — and that’s perfectly rendered in the 1970s plotline involving young Kate and Tully (played by Roan Curtis and Ali Skovbye, respectively).

Curtis and Skovbye don’t just look like they could grow up to be Chalke and Heigl, they do a remarkable job in conveying the personality traits each woman will inhabit in a way that feels genuine. When the pair first meet it’s under the belief that Tully’s mother has cancer, a lie the young girl tells others to conceal her mother’s penchant for drug use and other elements of Hippie 101. It isn’t until halfway through the series when the script actually lets Cloud and the young girls become their own characters and not just act in service to Heigl and Chalke. Tully’s birthday, wherein Cloud takes her and Kate to a fancy restaurant, perfectly conveys the relationship Tully as an adult is seeking. Skovbye’s face, holding all manner of embarrassment and disappointment, says so much. 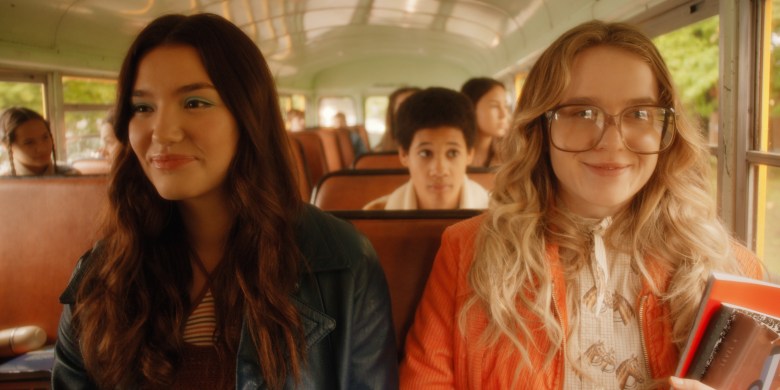 It’s also easier to tell a story of mothers and daughters and friendship when all of that is still formulating. The 1970s plotline feels so entertaining because there’s something engaging about a look back at a bygone era, particularly of that time with its second-wave feminism, and how that shapes identity. It’s unfortunate that the series never really touches on the ways the 1970s did focus on women. Cloud talks of protests and revolutions but more because that’s a hippie trademark than anything character-based. For all the attempts to reiterate ‘This is the 1970s!’ it’s pretty weird that the likes of Gloria Steinem never factors in.

These time periods are all interwoven; a straightforward narrative would have worked far better. There’s little rhyme or reason to when flashbacks or flashforwards happen, and oftentimes you’re left yearning for more focus on young Kate knowing her mother is cheating on her dad, or Tully’s reaction to her mother’s dating. Really, the young narrative is there to set the scene when, in fact, it’s the far more compelling narrative. If the goal is to show how times have changed (or in many cases, stayed the same) there needs to be additional delving.

Kate’s understanding that her mother cheated on her father could open up a lot of discussion on women being forced to marry, and instead it just segues into Kate, awkward and adult, falling into an “emotional affair” with another man. The third episode, with its use of Carly Simon and a montage about Cloud and Kate’s mother struggling with motherhood while the men in their lives blithely walk by, does more to create impact and complexity in three minutes than the entire rest of the episode.

On top of that, the narrative repeatedly does “gotcha” cliffhangers, one of which involves a main character death that is upended around Episode 4, leading to all manner of questions. It’s almost like the show knows there’d be nothing to get people to stick around without it.

The transition to the 1980s (assuming so because of the feathered hair and shoulder pads) sees Chalke and Heigl take the reins and it’s where things get a bit wonky. The two women too often devolve into caricature; Chalke rocking massive eyeglasses — because nerdy — while Heigl rocks blue eyeshadow like a Pat Benatar-loving goddess. It’s frustrating because where the 1970s portion feels like a series, the 1980s and present-day elements feel like a three-hanky soap opera for wine moms. 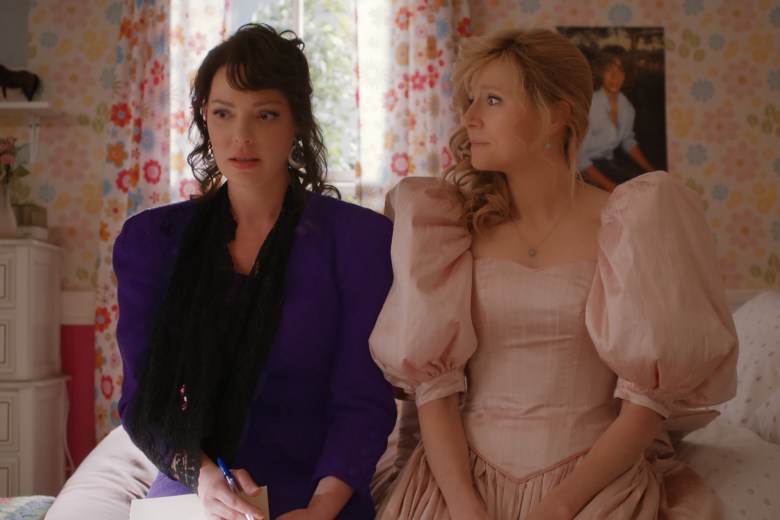 Tully and Kate’s friendship, which felt so strong in the 1970s, is hard to really justify as they get older. It’s hard to believe these two have stayed friends for any other reason other than to hate on each other — or complacency. Numerous characters remind Kate of how amazing Tully is, the “calm before the storm,” “a hurricane with everyone caught in her wake,” acting as a perpetual reminder that Kate will never be good enough. Which is a shame because Chalke plays the sweet-hearted, nerdy Kate so well, particularly in the present day when Kate, going through a divorce, starts to reassert her identity. The series takes a brief divergence into sitcom-land, with Kate engaging in numerous “this is obviously going to go bad” moments that work purely because of how joyous she is.

To her credit, Heigl does the heavy lifting. All of it. So much so that Tully Hart comes off like the most cursed, damaged character in the history of characters. I don’t want to say it plays like punishment porn — but for someone who had a horrible childhood, why can’t the woman catch a break? Throughout 10 episodes Heigl plays every emotion, from angry to happy to sad to traumatized. Tully is a lightning rod for every bad thing that can happen to a woman, and yet Heigl does make Tully captivating. The actress, who herself is often maligned for being difficult, leans into that belief and showcases why Tully has to be difficult: because no one else seems to support her.

Where Chalke is sweetness and light, Heigl is acerbic and dark. She glides into the room like Miranda Priestley, with an attitude that boils down to “I’m Tully Hart, dammit.” And it works so wonderfully well, particularly in the 2003 plotline when Tully butts up against sexism and a workplace sexual harasser. But before that, in the moments where Tully reunites with Cloud as an adult, Heigl and Garrett bounce off each other so well it’s a shame the plot is so quick. Instead, we see Tully as this sexual dynamo trying to find love in all the wrong places.

And, boy, does “Firefly Lane” want you to care about the men these women love. Lawson’s Johnny Ryan, a wannabe war correspondent, never gets the heart pumping regardless of how moony-eyed Kate gets. A truly bizarre plot point sees Johnny become consumed by the atrocities happening in El Salvador and getting upset that the local Seattle news station he works for won’t cover it. (It’s not CNN, dude!) Then again, the other guys Tully and Kate encounter aren’t much better, all being basic guys who the women need as springboards for their own development. On the one hand, I’m loving a series that prioritizes the women first and just makes the guys faceless objects. On the other….they’re all pretty boring to watch.

“Firefly Lane” is determined to wring tears and laughter out of you, and it does. It’s just that more often than not, it does so unintentionally and for all the wrong reasons. But you can’t lay the show’s problems at the feet of its heroines, who are all varying ranges of great. Chalke and Heigl make the series far more entertaining than it has any right to be.

Emma Willis looks Valentine’s Day ready in a heart print blouse – get the look for only £10.99
World News