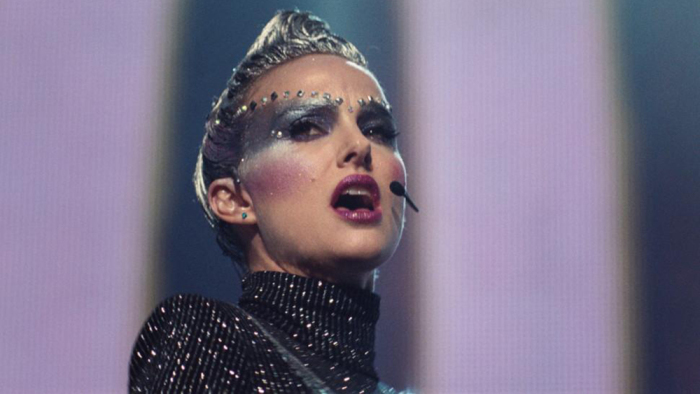 It’s been nearly two years since Katy Perry — one of several modern musical supernovae reflected in the beautiful, shattered-glass surfaces of “Vox Lux” — launched the campaign for her fifth album by declaring a new era of “purposeful pop.” No longer would her catchy-as-chlamydia radio anthems be mere teenage dreams of kissing California gurls last Friday night, apparently. Perry’s pop would show invigorated social and political resolve, leaving a woker, sparklier world in its wake. “I’ve seen behind the curtain, and I can’t go back,” Perry said, setting herself up for a media drubbing when the album, give or take some standard-issue empowerment mantras, sounded much like all its slickly enamelled predecessors.

For pop has always been purposeful, and its populist purpose tends to drive it away from the self — a quandary that Brady Corbet’s extraordinary second feature picks at with icy fascination. Powered in its second half by a riveting performance of fiercely mannered bravado by Natalie Portman, as a kamikaze electropop diva running her Faustian fame off and under the rails, “Vox Lux” paints a sharp, shellacked portrait of a ghost in the celebrity machine.

It’s also a likelier spiritual cousin to Corbet’s messily formidable debut “The Childhood of a Leader” than it may seem from the outset. Just as that film skipped across decades in charting its protagonist’s progression from problem child to fascist dictator, “Vox Lux” likewise traces the making of a monster, shaped by personal trauma and wider-world tragedy. The millennial pop landscape may seem a less lofty area of investigation than early 20th-century politics, yet this proves a richer, more penetrating film: Corbet’s high-minded formalism remains emotionally cool to the touch, but it’s stung by paralyzing grief from its opening frames.

Shot with a phlegmatic plainness that recalls the work of Corbet’s past collaborator Antonio Campos, a rightly jarring prologue — or prelude, to follow the wording of the film’s austere intertitles — presents a 1999 school massacre in clean, cruel strokes. A kindly homeroom teacher (Maria Dizzia) and a classroom full of vacation-fresh students are laid horrifically to waste by a single young shooter. Though it directly references the events and psychology of Columbine, it’s an imagined, Staten Island-set tragedy, with a sole survivor: Celeste (Raffey Cassidy), a shy but auspiciously named musical prodigy, who’s too pure for this world, if not the living hell that unfurls ahead of her like a blood-red carpet.

Cue Act I — “Genesis,” as it’s ominously titled — in which, at a memorial service for her slain peers, Celeste sings a self-composed song of mourning. The pretty, plaintive reediness of her voice and precociously bruised poetry of her lyrics strike a chord with the crowd, before carrying over to a larger public. (That’s not surprising: It’s really written, as are all the film’s sonically savvy originals, by slippery pop genius Sia.) Soon, the meek 13-year-old has a national hit on her hands, an earnest anthem for the country’s collective PTSD that nets her a major-label record deal, a cynically grizzled manager (a sneering, sallow Jude Law) and what appears to be a one-way ticket out of stricken Staten Island. Out of darkness comes, well, not light exactly, but enough money and glitter to compensate.

Before we know it (and scarcely before she does), the Paula Cole-loving teen is molded into an industrial pop princess far from her demure Christian roots. Cassidy’s performance is perfect in its muted, malleable ingenuity; her role turns out to be a dual one, later mapping the insecurities of ill-supervised girlhood under different auspices. With older sister Eleanor (Stacy Martin) as her unreliable guardian on the road — put a pin in this theme of parental absence, for it’ll repeat on Celeste later on — a sinkhole of premature drugs and predatory men opens up all too readily. By the time the events of 9/11 jolt her psyche afresh, she’s in queasy adolescent-adult limbo; trauma is now something to be tamped down, not sung out loud.

As it happens, Celeste’s soul-sucking transformation closely mirrors the one undergone by Lady Gaga’s earthy rocker in another Venice premiere, “A Star is Born.” Bradley Cooper’s film would fill an intriguing double bill with “Vox Lux,” not least because, when we zoom forward into 2017 and Act II (“Regenesis,” of course), Celeste has morphed into a kind of trainwrecked Gaga proxy, by way of Perry, Demi Lovato and sundry less successful pop prototypes. An autotuned android marked by angular metallic styling and dubiously chosen tattoos, she boasts a well-fed addiction for every one of her platinum records.

We meet her on the eve of a tour-launching concert in her home city, edgy and jangled and out of sorts. That’s before urgent news travels of a mass shooting in Croatia, carried out by assassins in sequined Celeste cosplay, adding an unwelcome line of media coverage to an already tetchy promotional carousel. Corbet stages this second massacre with such dreamy, dread-laced serenity, it seems for a few seconds as if it could be one of Celeste’s own music videos: In the film’s nightmarish vision of the 21st-century celebrity circus, a career once shaped by terrorism now inadvertently shapes it back.

Striding further past the line of camp artifice she so effectively crossed in “Jackie,” Portman plays the adult Celeste quite deliberately as a writhing mass of affectations barely held together by a skintight bodysuit. As her lone forged note of street-level authenticity, she’s sprouted an aggressive Staten Island accent that she never had as a girl; even in private, she struts across rooms as if leading an invisible formation of backing dancers. (That is, when she’s not swim-walking under the dizzy weight of manifold substances.) It’s go-for-broke work from Portman, who since “Black Swan” has excelled in roles that split femininity into separate modes of performance: A climactic, sustained concert sequence is a jaw-dropping display of robo-vixen exhibitionism from this usually tightly controlled actor. “I’m a private girl in a public world,” she sings in another of Sia’s throbbing, synth-ridden tracks — all given impressive real-world credibility by a crack team of hitmaking producers including Stargate and Greg Kurstin.

That the plastic dazzle of Celeste’s music shares equal space on the soundtrack with another thunderingly deranged orchestral score by Scott Walker — so integral to “Childhood of a Leader’s” imposing grandeur — encapsulates the exciting ways in which Corbet’s filmmaking has evolved. A tendency towards arch pomposity remains (not least in Willem Dafoe’s needless omniscient voiceover), but a scuzzier, more splintered sensibility has crept into his regal, oak-carved mise-en-scène.

Lol Crawley’s superb 35mm cinematography is as restless and as changeable as the woman it follows, sometimes charging forward in tune with her chaos, sometimes freezing her in its still, scientific gaze — yet another fixated lens she doesn’t need in life. Yet “Vox Lux” finally shimmies past the little-girl-lost clichés of so many sordid showbiz studies before it. A lost girl and lost cause Celeste may be, but by the film’s oddly triumphant finale, she owns her disorientation on stage with almost demonic determination. Maybe there is such a thing as purposeful pop after all.

Pete Davidson: Why Social Media’s ‘Not Safe’ For Him After Ariana Grande Split — Psychologist Explains