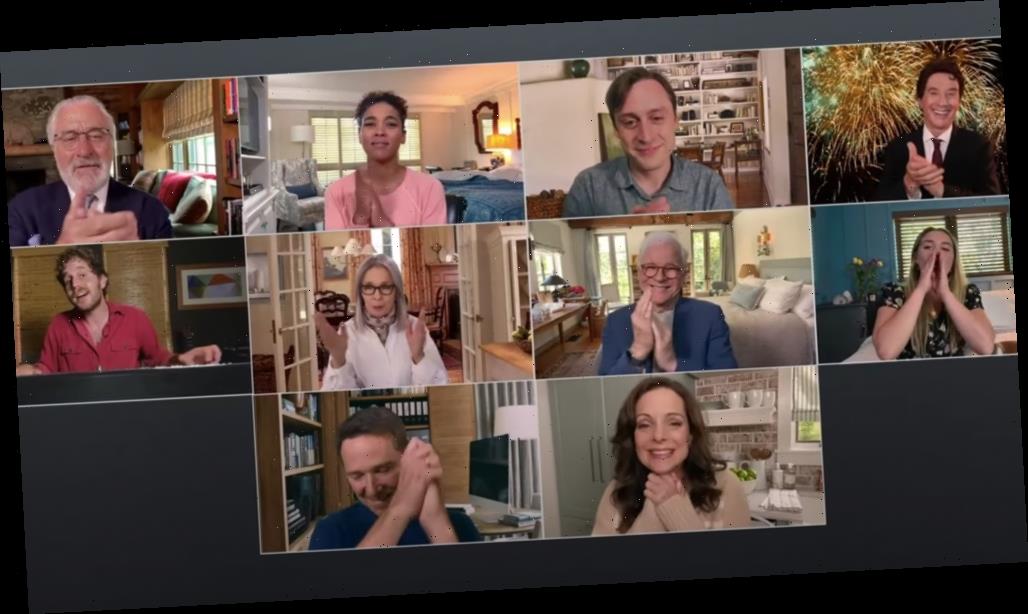 The film, a remake of the 1950 original movie of the same name, tells the story of George Banks (Steve Martin), who has to come to terms with his daughter Annie (Kimberly Williams-Paisley) getting married and moving out. Diane Keaton plays his wife, Nina.

The reunion, introduced by Reese Witherspoon, was to benefit the World Central Kitchen, a nonprofit organization dedicated to providing meals to communities affected by disasters, such as the coronavirus pandemic.

Called together by the Banks’ son, Matty (Kieran Culkin), for a special wedding announcement, the family gathered for a Zoom call. Along with Martin, Keaton, Williams-Paisley and Culkin, George Newbern and Martin Short reprised their roles as Annie’s husband Bryan MacKenzie and over-the-top European wedding planner Franck Eggelhoffer, respectively. All grown up, Georgie (Ben Platt) and Megan (Florence Pugh), the MacKenzie’s children, also appeared on the call.

Newcomers included Rachel (Alexandra Shipp), a doctor on the frontlines of the pandemic and Matty’s fiancé, and Robert De Niro, Rachel’s father, James.

Netflix teased the reunion event Wednesday morning with a short video posted on Twitter, depicting a screen-recorded video of George checking his emails, which included messages about his recent mask order, Annie’s digitized wedding photos and a reminder for a family video call on Sept. 25.

As the family catches up, viewers experience proper nostalgia as George assumes his overprotective fatherly ways, checking in with the family about their cleaning rituals and the status of the thousand masks he sent them, and stressing the importance of disinfecting absolutely everything. When his family assures him there’s no need to worry, he explains he has never had to cope with such a stressful time — well, not since Annie’s wedding.

So, naturally, when Matty announces he called the family together for a surprise online wedding to Rachel, who just finished a 24-hour shift and is quarantining in a hotel room, George freezes on screen — and not as a result of technical difficulties. Once he processes his shock, and irritation with James for getting out of having to pay for an expensive wedding, the festivities commence.

Rachel and Matty recite their vows, mimicking officiant Franck’s thick accent. As the wedding commences, Rachel is directed to find a bouquet of flowers from the minibar and her mother’s wedding ring.

Montages of the films play throughout the Zoom call, and during the wedding, George narrates, “We parents never fully see our children as grownups. We look at them and can still see the little kid they used to be. The memories of all those moments we shared stay with us. Not just the big ones, the ones we all have photos of, but the little ones — it’s especially those memories, the ones you’d think you’d forget over time that we treasure the most.”

Once Matty and Rachel are pronounced husband and wife, Franck’s Zoom background explodes in fireworks and music swells in tune to the joyous moment. Following George’s toast, which emphasizes his happiness at finally having a doctor in the family, Georgie performs a rendition of Frank Sinatra’s “The Way You Look Tonight,” bringing the celebration to a close.

Throughout the reunion special, a banner prompted viewers to donate at wck.org/father.

‘I hate you’: Allen Iverson unloads on mysterious media personality