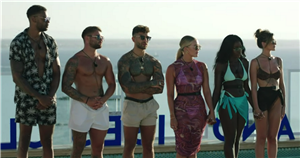 During the current series, there have been a string of public votes yet it has ultimately resulted in the Islanders themselves getting to pick which contestants in the bottom are dumped and saved.

She added: "Only one boy and one girl will leave today… and that decision is in the hands of your fellow Islanders."

Get exclusive Love Island stories and fabulous updates straight to your inbox with OK!'s daily Factor 50 newsletter. You can sign up at the top of the page.

Viewers, as well as past contestants Amber and Paige, who both previously won Love Island in 2019 and 2020 respectively, took umbrage with the voting twist as they complained that fans' votes were "pointless".

Amber, 24, tweeted: "Why would they leave the decision to the islanders AGAIN makes it too obvious #loveisland."

Paige, 23, wrote: "Why allow the public to vote yet continually let the islanders decide who stays #loveIsland."

While 2018 Love Island contestant Samira Mighty added: "I don’t see the point of a public vote ???? When they always just ask the islanders to choice … like every time!!! I’m shook tbh #loveIsland."

Elsewhere, a show watcher ranted: "They need to stop letting the islanders chose and just go based off public vote. It’s getting boring. #LoveIsland."

A different viewer put: "I don’t get why they do cliffhangers when it’s so obvious who’s getting dumped like I don’t see the point in a public vote when the islanders get the ultimate decision #LoveIsland."

While another fan added: "What’s the point of having a public vote if the decisions gonna be decided by 'the islanders' just dump the ones with the least votes. #LoveIsland."

On Sunday's show, Laura, 36, arrived at the contestants' party at Island Vibes Club where she revealed she has some "important news" to share.

The host then revealed that the public had been voting for their favourite Islanders as she shared the three girls and boys who had received the lowest votes from fans — Abigail, Mary, Kaz, Dale, Tyler and Jake.

The presenter said that those dumped will leave immediately and not even return to the villa before their exit.

And in another brutal twist, Laura added: "Only one boy and one girl will leave today… and that decision is in the hands of your fellow Islanders."

The Islanders were left shocked over the news, especially Liberty Poole who was left visibly upset over her boyfriend Jake and best friend Kaz being in the bottom.

Love Island viewers will have to wait until Monday's show to see which contestants will be dumped from the hit ITV2 dating show and fans were left fuming over another "cliffhanger".

It comes after Love Island revealed that two new bombshells are set to enter the villa in upcoming scenes.

Aaron Simpson, 24, and previously rumoured bombshell Priya Gopaldas, 23, are set to shake up the villa when it is at its most vulnerable following a number of arguments between contestants.

For the latest Love Island gossip, make sure to sign up to OK!'s daily celebrity newsletter and Factor 50 – your one stop for all the latest villa news.

Love Island continues nightly at 9pm on ITV2 and ITV Hub. Episodes are available the following morning on BritBox.