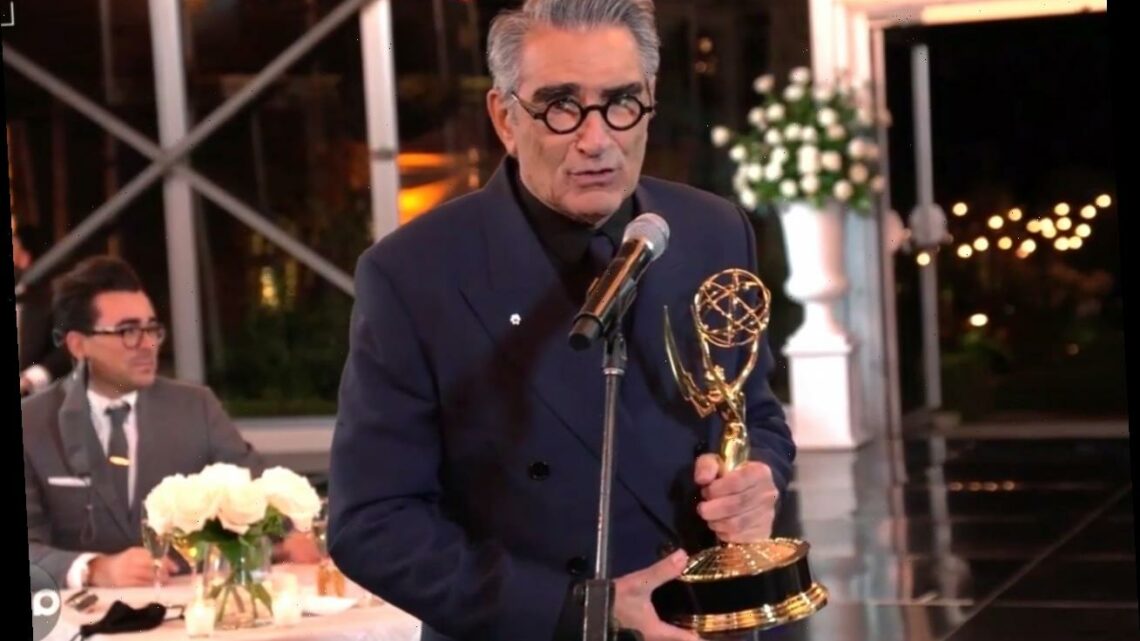 Eugene Levy is taking home an Emmy for the first time in 37 years.

The Schitt’s Creek actor, 73, won the award for outstanding lead actor in a comedy series for his role as David Rose in the long-running show. The last time he won an Emmy was in 1983 for SCTV, a Canadian television sketch comedy show.

In his acceptance speech on Sunday evening, Levy took the opportunity to thank son Daniel Levy, who co-created Schitt's Creek alongside his father, in addition to starring in the show and serving as the showrunner. Levy's daughter, Sarah, also stars in the hit show.

"As a dad, getting to work on camera for six years with both my kids, Daniel and Sarah, I had such a joy. I love you both and could not be prouder," Levy said at the virtual awards show. He continued, "And that brings me to my multi-Emmy-nominated partner, Daniel Levy, who took our show that we came up with and brilliantly guided it to this little Emmy party tonight, so thank you, son." So far, Schitt's Creek has won every single category at this year's Emmys. Earlier in the evening, Levy's Schitt's Creek costar Catherine O'Hara took home the award for outstanding lead actress in a comedy series. Levy thanked O'Hara in his acceptance speech, sharing that she "evidently can make anyone she works with look good." "It's kind of ironical that the straightest role I've ever played lands me an Emmy for a comedy performance," Levy added in his speech. "So now I seriously have to question just what I've been doing for the past 50 years, but that's for another time."

Last year, Bill Hader took home the prize for his role in Barry.

Schitt's Creek is up for 15 awards tonight, including outstanding comedy series, winning six so far.

"It’s rare to have a show like Schitt’s Creek at this point in my career, in the so-called ‘twilight’ of one’s career," the star told Variety. "And to have created it with my son [Dan Levy] makes it even sweeter, certainly. It’s the show that I’m the most proud of, in anything that I’ve done and to have it come now is just fantastic."

Zendaya Is a Dream in Christopher John Rogers for the Emmys