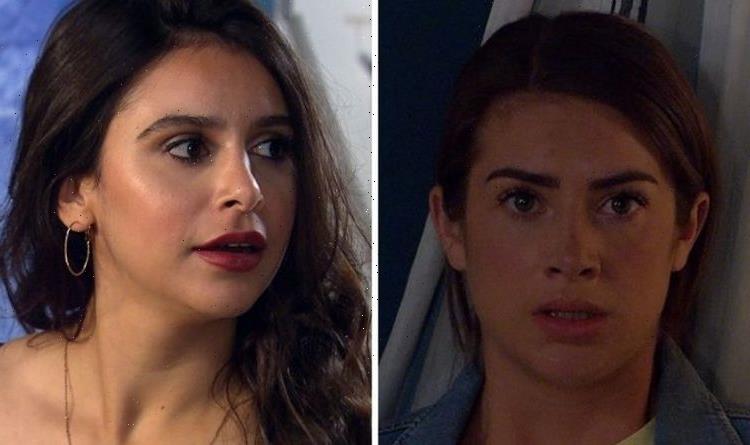 Meena Jutla (played by Paige Sandhu) has grown jealous of Victoria Sugden’s (Isobel Hodgins) bond with her boyfriend, David Metcalfe (Matthew Wolfenden) over the last couple of months. After coming home from Ibiza, she wasted no time preparing to kill again after thinking Victoria moved into the pair’s home. After almost being caught in broad daylight trying to kill her, will Victoria’s death come sooner than she thought?

In upcoming scenes, Victoria is heartbroken when David tells her he wants nothing to do with her and she needs to stay away.

However, she grows more worried for David’s safety and attempts to find out what is going on between the two.

She quietly slips into Farrers and is confused to see David’s bed empty, but soon hears the door open, she finds a space to hide.

However, after being trapped in the bedroom, Meena spots her and hatches a plan to expose Victoria.

Meena starts to unbutton her blouse for David, where Victoria is then forced to reveal herself, leaving David angry at her sneakiness.

He asks her what she was trying to achieve before telling her to leave his house and not to come back until she has sorted herself out.

Later that week, when everyone starts to turn up at the base camp for the survival challenge, David covertly confesses his love for Victoria.

Thinking they are alone, the pair walk away, unaware that Meena has unfortunately heard every word of the confession.

Setting off her rage of jealousy once more, Meena sets a plan in motion to murder Victoria and have David all to herself.

Will Meena finally get her revenge and kill Victoria?

Or will David’s confession potentially save her life, ultimately catching Meena in the act?

Meena is yet to find out the pair kissed, but viewers will remember she almost killed in broad daylight after believing Victoria was inside her house when she came back from Ibiza.

After seeing a chef hat with some luggage outside the house, she believed Victoria was inside and decided to kill her there and then.

Scanning the area, she took off her scarf before wrapping it in her hands as a weapon planning to strangle Victoria.

However, to her surprise, Priya Kotecha (Fiona Wade) was actually in the house, planning to move in to help David with his recovery after he was shot a few weeks ago.

After catching her with the scarf, Priya told her she thought she was going to strangle her with it before Meena laughed it off.

Walking into The Hide, where David and Victoria were talking, leading to an awkward conversation and Meena convincing David they needed to go home.

It wasn’t until later on that Meena made her feelings clear when Victoria came round to check on David.

She refused her entry, claiming he was sleeping and warned Victoria she had heard things, meaning she was going to make sure David was ok from now on.

After the dramatic trailer ITV put out of Emmerdale over the next month, someone is set to die, but will it be Victoria?