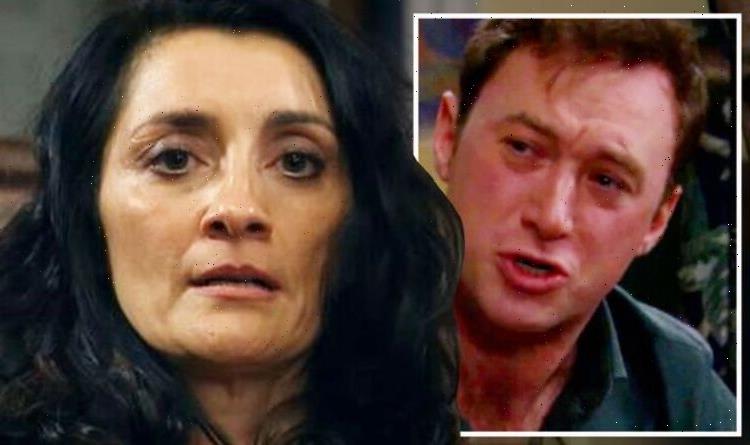 Liam (played by Jonny McPherson) has been at the centre of Meena Jutla’s (Paige Sandhu) downfall in recent weeks on Emmerdale after discovering she killed his daughter, Leanna Cavanagh (Mimi Slinger). Although the ITV soap villain is now behind bars, there is still plenty of time for her to evade justice as she seems to be using her powers of manipulation to grant herself freedom. Manpreet (Rebecca Sarker) holds the key to getting her sister sent to jail for life but as her fear for Meena continues to grapple with her, she could betray her friend and colleague in the worst way possible.

The drama continues in next week’s episodes of the weeknight serial drama as Meena’s court case continues to play out.

Although she has pleaded guilty to several charges, including kidnapping Manpreet, she hasn’t accepted any guilt over the death of the people she murdered.

This is because she is playing a cruel game with the villagers as part of her final act of revenge for them exposing her to be a villain.

As the pressure mounts and the walls close in on her, Manpreet struggles to hold it together when it is her turn to take to the stand.

Away from prying eyes, she tells Liam she is not going to be testifying against her sister as she doesn’t think she is strong enough to do so.

Unfortunately, this is not what Liam wants to hear as he knows Manpreet is one of the only people to escape Meena’s clutches alive.

She also grew up with Meena and knows who the villain is inside and out, making her one of the most powerful witnesses on the stand.

As the atmosphere turns sour and Liam is left broken by the betrayal, he fears he will never get justice for what happened to Leanna.

Needing some sort of revenge, the doctor could decide he is going to make Manpreet’s life a living hell and sack her from her role at the GP practice.

This job is the villager’s life and she would be devastated if she couldn’t practice anymore and help those in need.

Is there a way to keep them in?

However, she would know Liam is hurting and would hope at some point he would reverse his decision as he knows what a good doctor she is.

As the weeks pass by and Liam becomes colder towards his friend, she could begin to accept she has lost her job for good.

Reflecting on his decision, Meena’s sister could begin to think it was the right call as she shouldn’t work at the practice if she couldn’t have realised her sibling was a killer sooner.

She knows the practice is also receiving a lot of backlash from the public over the discovery Meena is a killer who also worked there.

Although she escaped Meena’s clutches with her life, the doctor could feel she is also being punished for crimes she didn’t commit.

This could give Manpreet the incentive to start a new chapter of her life away from the village as she knows she wouldn’t be able to work at the practice ever again.

As for Meena, she could get away with murder if her sister fails to ever testify against her and the crimes she committed.

The killer might be able to walk free from prison, or at least just be punished for the other crimes she pleaded guilty to.

This would still give her a shorter sentence and so she would be able to return to the village sometime in the future.

Realising her sister has gone, however, will Meena stick around or will she decide she is going to hunt down Manpreet?

Speaking on Tuesday’s edition of This Morning, writer for the show Sharon Marshall discussed how the team did look at a way Meena would be able to walk free.

The soap expert explained: “We do look at serial killers and go, ‘Is there a way to keep them in?’

“‘Can people get away with it?’ So we said, ‘Look, is there a way legally that she could go through this if she pleads a certain way?’

“And the research team readout 25 counts of illegal activity she’d done just on-screen, that we knew about. Probably more off-screen.

“So she’s broken the law 25 times… probably not,” she continued but it does seem in the most likely instance Meena will be punished for the crimes in some respect.

Taking to Twitter, viewers have shared their thoughts on the latest developments, with Grianne writing: “Can’t believe Manpreet genuinely decides not to testify against Meena after all really?

“What the f**k is she even thinking seriously? Doesn’t she kind of owe it to the victims? Without her, the case is so much weaker. Liam will never forgive her either sadly #Emmerdale.”

Olly commented: “I have a feeling we will not be seeing the last of Meena this week… And honestly, I hope I’m right! #Emmerdale.”

David added: “Emmerdale seem to get stuck on murder storylines, though I don’t see why they are stringing out Meena’s story after she was caught #Emmerdale.”

Emmerdale airs weekdays at 7:30pm on ITV, with an hour long episode airing on Thursdays.